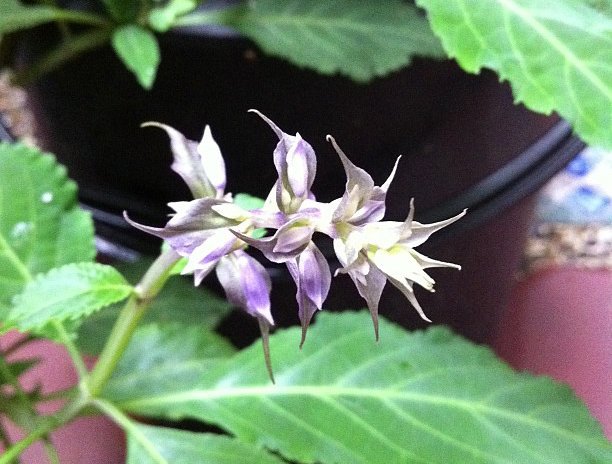 Habitat: A perennial member of the family Labiateae growing to about 1m in forest ravines in moist, humid areas at elevations of between 750 and 1,500m. It is native to Mexico and has large, spear-shaped sage leaves on hollow stems that terminate in spikes of white flowers with purple calyces. The whole plant is highly aromatic and hallucinogenic.

What does it do: The plant forms one of the sacred psychotropic plants of the Mazatecs, which is used in their shamanistic ceremonies, the others are Ipomoea violaceae and Cylocybe mushrooms. One of the monks accompanying Cortez throughout his conquest of Mexico referred to a sage-like plant that the Aztecs called The Noble Prince used to induce a trance-like state in which it was supposed they communed with the devil. It is interesting that the Mazatecs, who are largely converts, name the sage after one of the most iconic figures in the Christian church.

The main chemical content of the plant is a diterpinene; Salvinorum A, which is described as natural LSD and is an opioid agonist (a substance that triggers a response in a cell). The leaf is the source of the chemical and is taken as an infusion that imparts a short hallucinogenic response or dried and powdered and smoked or snorted as snuff, which can cause visions and supposed out of body experiences. Many experimenters with divinorum refer to the body being spun through a vortex or flying away from the physical body.

Mazatec shamen use the plant to treat a range of ailments including anaemia, diarrhea, infections of the urinary system, rheumatics and to restore vigour to the ailing. However, the most common application of divinorum is in combating witchcraft and curses.

The anthropologist DM Turner, experimenting with the plant in the eighties, refers to uncontrollable laughter, brilliantly coloured visions, being pulled and twisted, and low level flying. On recovery a sense of disorientation accompanied by a lack of physical co-ordination is experienced, but this is followed by a heightened sense of awareness and self-confidence leading to a period of intense concentration.

A number of medical centres and drug companies are trying to establish patents on extracts from this plant as recent experiments indicate it may prove of value in treating drug addiction, Alzheimer’s disease, HIV, depression and schizophrenia.

Aegean flight traces ‘200’ in sky over Peloponnese (with video)