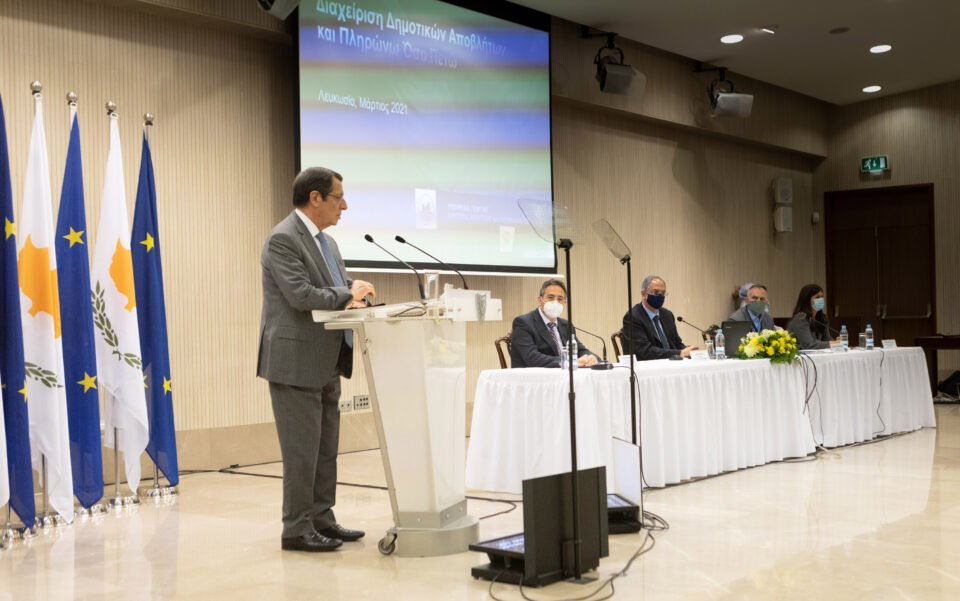 The bill is set to pass before the May 30 elections so that it can be put to force six months later.

“The focus of this policy is on the protection of biodiversity, the reduction of the effects of pollution on public health and ecosystems, the rational management of our natural resources and our contribution to the international effort to tackle climate change,” said Anastasiades during a presentation at the palace.

The president said the pay-as-you-throw scheme was an integral part of overall waste management. It is a usage-pricing model for disposing of municipal solid waste. Users are charged a rate based on how much waste they present for collection to the municipality or local authority.

Under the new system, people would have to buy their rubbish bags from the local authority.
It will have a separate pricing system for vulnerable groups of the population and include a fixed fee for the bags.

“The system is a motivation to change habits, to reduce the quantities of waste we produce and with their proper separation to contribute to the protection of the environment,” Anastasiades said.

“Through this new and ambitious path, we want to change the way we discard our waste and adopt a cyclical model, in which we will maintain the value of products and raw materials we throw through reusage, repair and recycling.”

At the same time, he added, it would strengthen Cyprus’ commitment to green entrepreneurship and employment, as new jobs would be created. Local authorities will be informed this month how to go about introducing the scheme. Aglandjia municipality is one that has already done so.

The pay-as-you-throw bill is a key element of the ‘European Green Deal’, a set of policy initiatives by the European Commission with the overarching aim of making Europe climate neutral in 2050.

Anastasiades added that the government received €25m in funding from the European Union Cohesion Fund to help implement the new strategies outlined by the bill.

He also said that a total of €485m worth of green projects had already been implemented or planned in Cyprus for the years 2021 to 2023, as well as seeing an additional €400m allocated by the government for the transition to a green economy.

Last week, Akel MP Giorgos Loukaides also said the House environment committee will start examining the bill article by article soon with the aim being to pass it before parliament dissolved ahead of the elections.