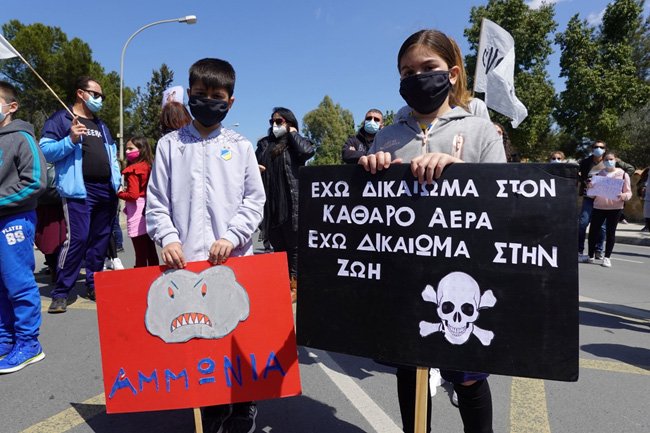 File photo: Residents demonstrating against the asphalt plants in Dali

From car emissions to polluting factories, the state is failing its people

People often ask me which is the biggest environmental problem that we face. My answer is that the biggest problem is waste management, but the most pressing issue to solve, is that of the bad air quality we breathe.

Proof of this is easy to find. On December 14, 2018, the Cyprus Mail published an article with the title “Living in air-polluted Nicosia will cost residents on average a year of their lives” which carried an interview with Jean Sciare, professor and director of the Energy, Environment, Water Research Centre (EEWRC) at the Cyprus Institute.

The Air quality in Europe — 2020 report, published by the European Environment Agency, uses data that it receives from all EU countries. On page 108 it has this table below that indicates the estimated number of premature deaths, which in Cyprus totals more than 800 people per year. If one checks these figures in reports for previous years, the estimate figures are approximately the same.

About 30 per cent of the total pollution originates from nearby countries, but the rest is due to the great number of cars we have in our roads, central heating systems and electricity production.

The transport-related emissions can be reduced by introducing an efficient and easy to use public transport system. This, combined with good pedestrian routes and cycling infrastructure, can really make a difference.

Back in 2010, the then government came out with the much publicised Integrated Mobility Master Plan of Nicosia, but apart from purchasing the big blue buses nothing much was done for Nicosia. The Sustainable Urban Mobility Plans for Limassol and Larnaca were completed last year but we are worried that they might have the same fate as the Nicosia one, and for many years to come: government will do nothing again.

Apart from reducing the number of cars on the road, another solution is of course to promote electric cars.

In order for this to be worthy in Cyprus, we should have introduced a standard subsidy for any electric car buyers, extend privileges like free parking and have charging points at key places. It would have been wonderful of course, if we produced a higher percentage of electricity using renewable systems, but this is another system failure we knew was coming after years of doing nothing to promote them.

In order to reduce emissions from building central heating systems and fireplaces, the solution is simply to assist owners to carry out energy upgrades on their buildings. Cyprus only recently introduced housing insulation standards and therefore most of the housing stock is without any form of insulation.

The point here is that a well-insulated building will need much less energy and thus emit far fewer gases.

Apart from traffic, many people suffer from bad air quality because they live near farms, factories or workshops.

The best-known recent story is that of the Astrasol factory in Latsia. This factory was given a permit to operate in the heart of a residential area. Soon after, cancer incidents increased, and by the time the factory was closed, in a 200 metres radius more than 100 people were diagnosed with cancer and a number of them died because of it.

Residents were complaining for years, but the government did nothing to protect them.

Since 2013, 5,000 residents in an area of Dali have complained that all night they breathe fumes and odour from the nearby asphalt plants.

Just like the Astrasol people, they demonstrate often, TV channels often cover their case, but years have passed with no action.

Similar complaints have been made by residents near the Vasiliko plant and those in the vicinity of the old Vati landfill which is almost daily on fire.

Residents in many villages often complain of odour coming from nearby pig and poultry farms.

I remember many years ago, as an activist we were fighting alongside locals to close down polluting factories all over Cyprus.

We hoped that joining the EU, the resulting legislation would have given us enough protection from all these problems.

We are still facing problems simply because the national legislation obliges the government to carry out measurements and protect civilians only from gases resulting from petrol and diesel fumes.

And as we are nearing Easter, I should remind everyone that Easter bonfires are illegal in a city, but municipalities and the police pretend that all is OK.

Bad air quality is an issue all over Europe and the UK. This is the main reason why air-purifiers are so popular nowadays! I have two of them at home.

No more delays. We must get tough on child abuse

Our View: ‘Historic day’ for halloumi could lead to problems down the road