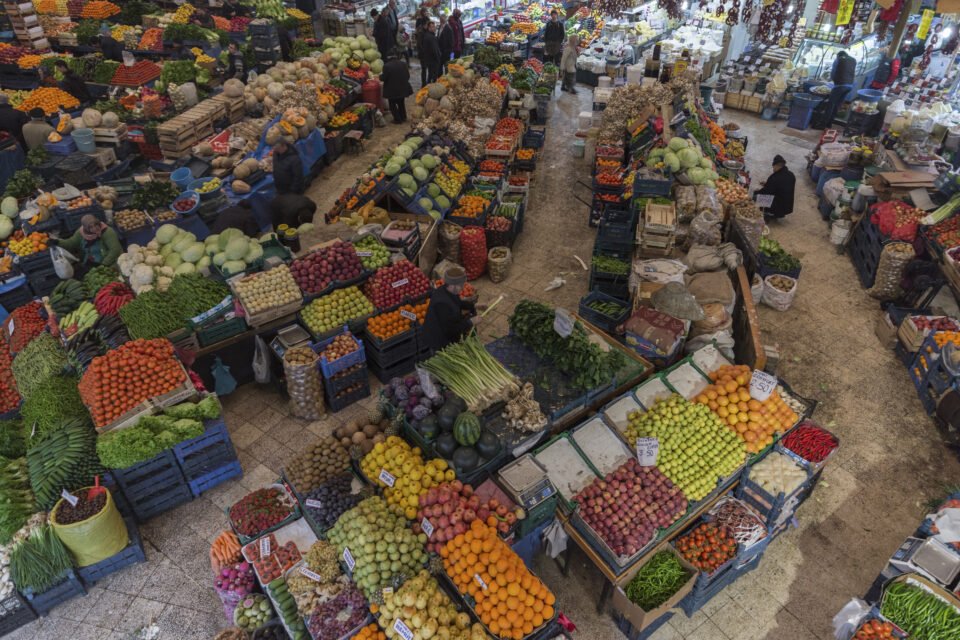 You know things are serious when supermarkets start locking away baby formula. Over the past year, 28,000 people in Turkey might have died of Covid-19. But what is affecting people more than the virus is “kitchen inflation.” The pandemic has outed the ruling Justice and Development Party (AKP)’s failed agricultural policies that have sent prices of everyday foodstuffs through the roof, while growing unemployment, foreclosures and a plunging currency after the central bank chief was dismissed diminish the purchasing power of citizens.

Research Istanbul’s February 2021 report concludes that 42 percent of citizens believe that the economy is Turkey’s biggest problem, whereas the pandemic lags behind in third place. And it is no surprise, since food prices have increased by more than 20 percent in the past year. An average household’s expenditure on foodstuffs is the highest among countries in the European region, with food prices in Turkey having surged more than in any other country in the Organization for Economic Cooperation and Development (OECD). In a nutshell: fruit costs 58 percent more than it did pre-pandemic, vegetables are up by a staggering 89 percent and essentials such as sunflower oil are up by 50 percent. There has even been a three percent jump from November and December alone.

In the past decade, as food prices have been dropping around the world, Turkey’s prices have been steadily rising. This is mostly due to a ruinous mismanagement of the country’s vast agricultural sector by the AKP. Ten years ago, 23 percent of jobs were in agriculture; by 2018 it was 17 percent. Agriculture used to account for 10 percent of Turkey’s GDP. Now it is half that. Not only have government policies devalued farming and left farmers to fend for themselves, but instead of fixing this, the AKP has chosen to rely heavily on imported goods.

With less land given over to cultivation and fewer people to work on it, the harvest is shrinking. Take onions, for example. Turks consume two million tonnes of them a year, but onion cultivation has decreased by 15 percent in the last decade and Turkey now has to import onions from Ukraine. A report by Greenpeace reveals that Turkey was the world’s number one importer of wheat in 2020 after production fell to 18 million tonnes from 21 million tonnes.

It is not a situation that can be reversed easily and certainly not in the short term. Meanwhile, the extra cost of all those imports is passed on to the consumer. The price of bread has doubled to two Turkish lira (26 US cents).

Adding to the crisis in Turkey’s agriculture is the country’s continuing struggle with chronic unemployment. Long before Covid, unemployment among 18- to 24-year-olds stood at 29 percent; it is now 35 percent. Out of a population of 84 million, 59 million people are in debt. In 2020, more than 40,000 companies and 100,000 small businesses closed down.

Official figures on employment tell a confusing story; unemployment has fallen but so has the number of people who still have jobs. “How is this possible?” the economist Emin Capa asks. “There is only one answer – more unofficial employment.”

At the same time bankruptcies have increased. Almost three-quarters of the bakkal neighborhood grocery shops in Istanbul must let customers buy on credit, according to the Statistical Institute of Istanbul. The amount owed by customers to bakkal shops has gone up by 34 percent in the last year. The top three items people buy on credit are bread, eggs and cigarettes.

More than half the workforce in Turkey – 57 percent – earn the minimum wage of 2,825 lira a month – equivalent to about $350. But the Turkish Confederation of Trade Unions calculates that a low-income family of four still has to spend 2,345 lira – the equivalent of $300 – on food each month, which leaves little for everything else.

Yet the AKP insists that life has become easier under its stewardship. The deputy chairman, Muhammet Emin Akbasoglu, claims that before the party came to power in 2002, a family of five could not afford to have tea and simmit (a type of Turkish bagel) three times a day. “Today they can,” he said. “Tea is one Turkish lira, simit is one lira. That makes two lira per person per meal, so 10 lira for the whole family.”

On February 7, the Turkish daily, Takvim, devoted its front page to offering tips on how to save money on groceries. Such tips included: “don’t shop on an empty stomach” and “use a basket, not a trolley.” It also urged shoppers to “avoid nice smells.” As advice, it may have been well-meant but many thought it insensitive.

Recep Tayyip Erdogan, meanwhile, has hinted that something even more sinister is afoot and has ordered an investigation, promising, “We will not allow a couple of greedy traders to poison our food or our country’s people.”

The president has also said he expects prices to fall in the second quarter of the year. In the meantime, he has tasked the national Nourishment Committee, which was set up in 2014, to look for solutions. So far, all they have come up with is cutting VAT on some unspecified food items and removing import tariffs on others (again, unspecified). Neither will do any good if prices keep rising.

For Turkey, the pandemic has exacerbated a situation that had already made life difficult for many. A survey on citizen satisfaction in 2020 found that 14.5 percent of the population felt “deeply unhappy” – more than at any time in the last 11 years.

What is even more disheartening is that the majority of Turks – 71 percent – do not expect their lives to get easier or better. And who can blame them? If the price of even the most basic foodstuffs continues to rise, if more people have to struggle to feed their family, a shortage of satisfaction will be the least of the country’s worries.

Alexandra de Cramer is a journalist based in Istanbul. This article first appeared in Syndication Bureau