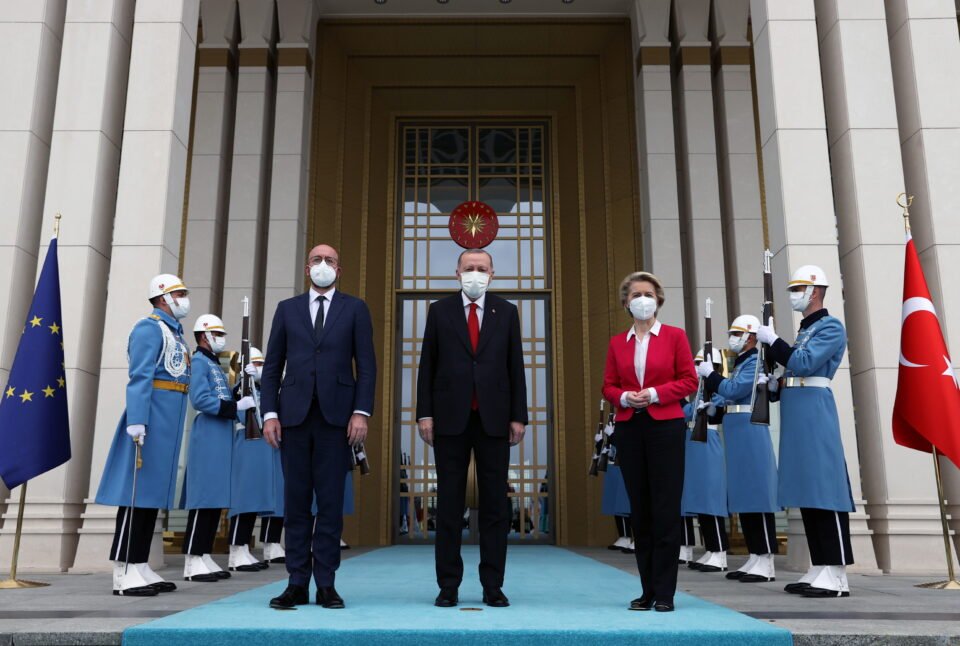 The EU remains committed to the relaunch of the Cyprus settlement talks and fully supports the UN-led process as an active observer, European Council President Charles Michel said on Tuesday after meeting Turkish President Recep Tayyip Erdogan in Ankara.

Michel and European Commission President Ursula von der Leyen were in Turkey to discuss, among other things, trade and refugees with Erdogan.

Michel said that “at our European Council meeting last month, we discussed the situation in the Eastern Mediterranean and the EU’s relationship with Turkey.” He added that the EU’s strategic interest remains a stable and secure environment in the Eastern Mediterranean and a mutually beneficial and positive relationship with Turkey.

“On Cyprus, the EU remains committed to the relaunch of the settlement talks. As an active observer, the EU fully supports the UN-led process and we look forward to the informal meeting that will be held in a few weeks time,” he stressed.

He added that in recent months there has been a de-escalation as regards Turkey’s behaviour in the region. “This is a positive development, which must be sustained and enhanced,” Michel said.

“We have told President Erdogan that the EU is ready to put a concrete and positive agenda on the table, based on three pillars: economic cooperation, migration, and people-to-people contacts and mobility,” he added. “Our engagement will be progressive, proportional and reversible. And we hope Turkey will seize this window of opportunity.”

He pointed out that the EU has a strategic interest in developing a cooperative and mutually beneficial relationship with Turkey but said that at the same time, “we are determined to defend EU and member states’ interests and to promote our values.

“For its part, the EU is ready to walk the talk. We will assess the progress at our European Council meeting in June,” he said.

Von der Leyen said the European Commission will soon make a proposal to Turkey to ensure the flow of funding for refugees, adding that Europe wants “much better relations” with Ankara but that it is “still early.”

She added that Ankara’s adherence to a 2016 migrant agreement would be a “major show of goodwill.”

Von der Leyen said respect for fundamental rights and rule of law are crucial and that she was deeply worried about Turkey’s decision last month to withdraw from the Istanbul Convention, which aims to protect women from violence.

The visit by Michel and Von der Leyen followed an EU summit last month where the bloc said work could begin on deeper trade ties and on providing more money for refugees in Turkey.

Despite concerns over what some European leaders call recent Turkish backsliding on human rights, the EU has applauded Ankara’s recent withdrawal of vessels operating in disputed waters and restarting talks with Greece.

The EU last month opened the door to begin updating a customs union as demanded by Ankara. This would bring EU candidate Turkey into the internal market of the world’s largest trading bloc and allow unhindered flow of goods and services.

Meanwhile, in an interview on Monday with Greek television ERT, President Nicos Anastasiades underlined his determination to take part in the informal conference on Cyprus in Geneva.

“We have achieved a number of convergences, the legislative and judicial authority issues have been agreed,” the President remarked, noting that significant issues are still pending – the executive issue at some point, property, territorial adjustments and the issues of guarantees and the presence of troops on the island.

“Listening to positions expressed by the Turkish government and the Turkish Cypriot leader, that of two states, as well as sovereign equality the way they interpret it, I wouldn’t say I am optimistic,” the President said.

Nonetheless, he would be going to the conference with a “positive attitude.”

Anastasiades urged Ankara to realise that its aim for two states is considered unacceptable by everyone, including the United States, Russia, China and other permanent and non-permanent members of the United Nations Security Council, as well as the EU.

The president stressed that Nicosia has made it clear it is interested in improving EU-Turkish relations on condition that provocative actions will not be repeated.

This should be long-lasting, he added, noting that Cyprus will not hesitate to veto the customs union between the EU with Turkey if the latter does not keep its obligations toward member states.

The Cyprus problem and the Geneva meeting will be on the agenda when UK Minister for European Neighbourhood and the Americas Wendy Morton is on the island on Wednesday and Thursday, in Cyprus. She will have separate meetings with Anastasiades, Turkish Cypriot leader Ersin Tatar and Foreign Minister Nikos Christodoulides.

Man charged after more than 40 thefts