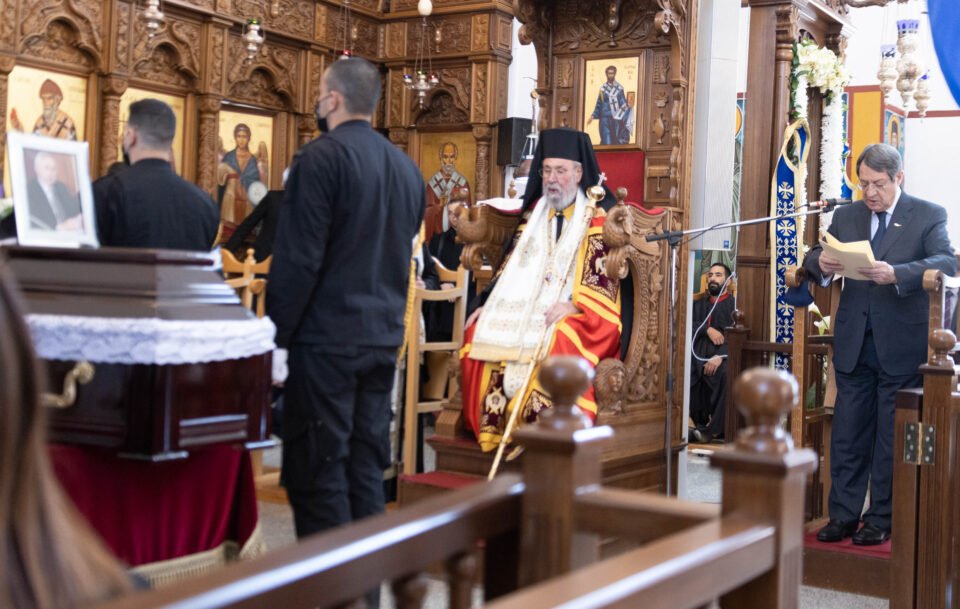 Speaking at the funeral of former Interior Minister Socratis Hasikos on Sunday, President Nicos Anastasiades said he had lost a dear friend and special partner.

“My dear Socrates,” he said, “I don’t want to believe that today I’m saying goodbye to you for the last time.

“The same feeling of sadness and pain is shared by your three beloved children, your family, but also by the thousands of friends, partners and those who valued your personality and contribution”.

Hasikos passed away early on Monday morning in Germany at the age of 64 after a long battle with cancer.

He was born in Nicosia on April 12, 1956 and grew up in the village of Dikomo in the Kyrenia district. He studied law at the National and Kapodistrian University of Athens.

From 2003 until February 2013 he was the chairman of the board of the AlfaMediaGroup. He was also the owner of the newspaper Alithia, of the radio station Sport-Fm and a major shareholder of television station Omega.

Hasikos, a vice president of Disy, was first elected as an MP of the Kyrenia district in 1991, a position he held until 1996.

On August 25, 1999, he was appointed Minister of Defence under the Glafkos Clerides administration. He held this position until February 28, 2003.

He was re-elected an MP with Disy in the parliamentary elections of 2006 but chose not to stand for reelection in 2011.

On March 1, 2013, Hasikos was appointed interior minister by President Nicos Anastasiades. On May 10, 2017 he resigned for personal reasons.

“Socrates, I want at this time to express what you rightfully deserve: there is no greater recognition than the universal recognition of the work you have done, but also of the charismatic personality that God has gifted you,” Anastasiades said.

Hasikos was known as a straightshooter and staunch supporter of the island’s reunification.

Respected by friend and foe alike, Hasikos was prepared to listen to opposing views but also quarrel, even publicly, when he thought it was necessary.

At the funeral, held in the village of Episkopio, only Anastasiades, House president Adamos Adamou and members if his family were allowed inside the church. Other officials followed proceedings from an area in the church yard. The family did not accept condolences.

On Sunday the flags at all public buildings flew at half mast.

How ‘green’ are the batteries of Electric Vehicles?