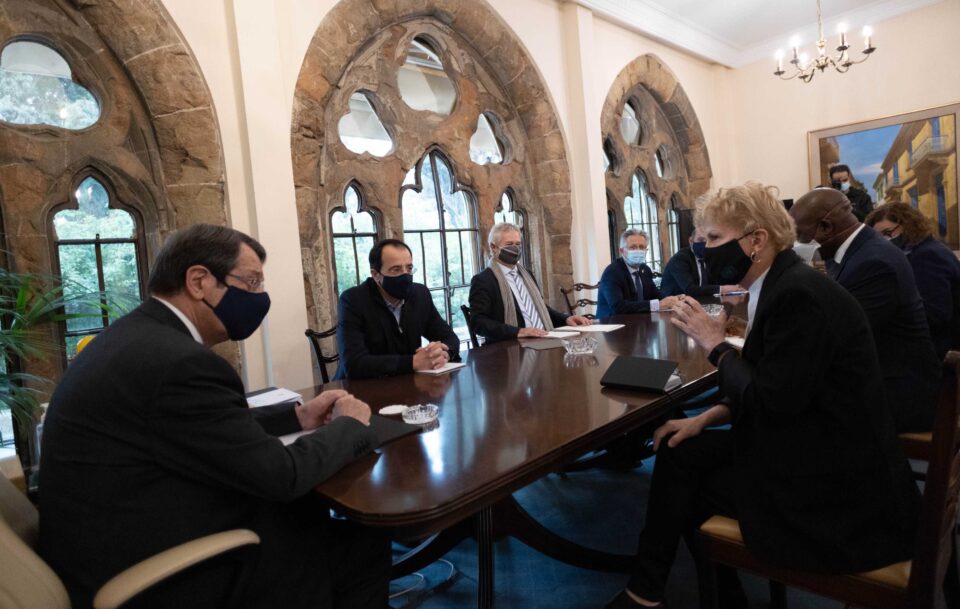 During the meeting, held as part of preparations for the five-way meeting in Geneva, Lute informed Anastasiades about the procedure and organizational matters for the meeting, Government Spokesman Kyriacos Koushos said after the meeting.

During the meeting, Anastasiades reiterated to Lute that he and the Greek Cypriot side are ready to constructively and creatively take part in the meeting, Koushos said, and he expressed the hope that the Turkish side will show the same so the Geneva meeting will have a result.

Lute is expected to have briefed Anastasiades about her recent meeting with Turkish Foreign Minister Mevlut Cavusoglou, while the president was thought likely to raise the Turkish side’s insistence on the subject of the talks being outside UN parametres.

He said that based on a two-state solutions the two communities can live side by side.

After 50 years of talking about a federations, the Turkish side will put a different solution on the table, Tatar said, adding that UN parametres must be re-examined.

Lute will try to secure the two sides’ consent that in the informal meeting in Geneva they will agree on a text that will safeguard the resumption of the talks.

The informal conference on Cyprus will be held in Geneva on April 27-29.

The UN envoy has already sent the programme of the Geneva meeting to the leaders, which will kick off with a dinner to be hosted by UNSG Antonio Guterres for the leaders and their delegations on April 27.

The informal meeting will take place the next day to be followed by bilateral consultations and then a fresh meeting.