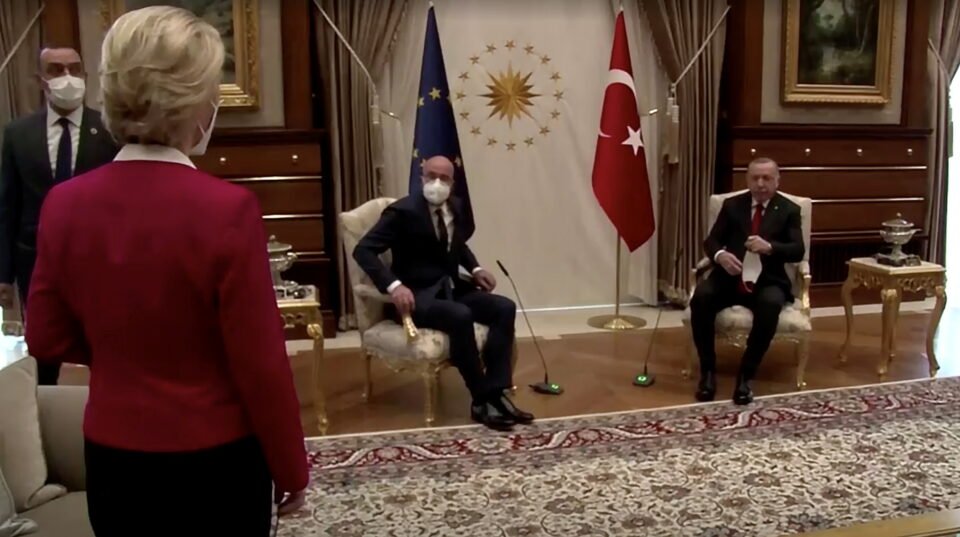 There has been widespread uproar at what was seen as misogynistic and insulting treatment meted out by Turkish President Recep Tayyip Erdogan to European Commission President Ursula von der Leyen.

At a meeting in Ankara last week, hosted by Erdogan for von der Leyen and European Council President Charles Michel, the European Commission chief was left without a chair. She was visibly taken aback when the two men sat on the only two chairs available, relegating her to an adjacent sofa. Video footage of the incident has elicited thousands of anti-Erdogan comments on social media, where it has been dubbed ‘SofaGate.’

No woman, let alone the European Commission’s first female president, should be on the receiving end of such thoughtless, shameful and disgraceful behaviour.

Turkey’s defence? Foreign Minister Mevlut Cavusoglu argued that the seating arrangements had been discussed and agreed with the EU ambassador in Ankara – who, like von der Leyen, is German. Nevertheless, the incident is a symptom of a deeply rooted disrespect for women within the Turkish establishment, regardless of whether the foreign minister’s claims are true.

Frankly, what has shocked me is that anyone was shocked in the first place. With all due respect to feminists and human rights activist in Brussels and across Europe, what did you expect from the Erdogan regime?

The discourtesy toward von der Lyen came less than a month after Erdogan pulled Turkey out of a key European convention aimed at combating violence against women – a convention signed, of all ironies, in Istanbul, and which Turkey was the first to ratify in 2012. If that withdrawal wasn’t a hint of what to expect, what would be?

For his part, Italian Prime Minister Mario Draghi was livid at the “mistreatment” of von der Leyen, and went so far as to call Erdogan a dictator. “With these dictators, let’s call them what they are…” he said. “I absolutely do not agree with Erdogan’s behaviour toward President von der Leyen … I think it was not appropriate behaviour and I was very sorry for the humiliation von der Leyen had to suffer.”

My issue with the Italian prime minister’s statement is, has he only just discovered that the Erdogan regime has transformed Turkey into a dictatorship? Was the arrest or suspension of nearly 45,000 military officials, judges, civil servants and school teachers in 2016 not enough of an indicator?

According to the Turkish justice ministry, a total of 128,872 investigations were launched in the past six years over “insulting the president,” of which 27,717 led to criminal prosecutions, and 9,556 to sentences of imprisonment. In this period, 903 young people between the ages of 12 and 17 were put on trial on the same “charge.”

As for suggestions that what happened with von der Lyen was “insulting to Europe” – I wonder if critics have noticed Turkey’s continued intimidation of Cyprus and Greece in the eastern Mediterranean.

Only on Saturday, Ankara accused Athens of supporting terrorist cells – another irony of ironies. This comes from a country that is often accused of harbouring, patronising and using extremists of all stripes, ready to use in theatres of war from Libya to Somalia and Syria to Iraq.

Then there is Erdogan’s tactic of resorting to blackmail, which he has honed almost to perfection. Every time Europe vows to bring him to heel for another indiscretion, whether it is illegally campaigning for votes among Turkish expatriates in Germany or encroaching on Greek territorial waters in the hunt for oil and gas deposits, the Turkish president threatens to open the floodgates of refugees into Europe. This is even greater cause for action to be taken against Turkey. Waves of refugees are a threat not just to European security and stability, and not just to European economies, but to the European Union’s core values.

What happened to Ursula von der Leyen will not be the end of such disrespectful behaviour, and what is happening to the Turkish opposition and to all those who dare to differ from Erdogan is only the thin end of the wedge. It will continue to happen until Europe and the world resolve to call him out for what he is.

When you invite a monster to the table, the least of your problems is a missing chair.

Faisal J. Abbas is editor in chief of Arab News and this article first appeared there