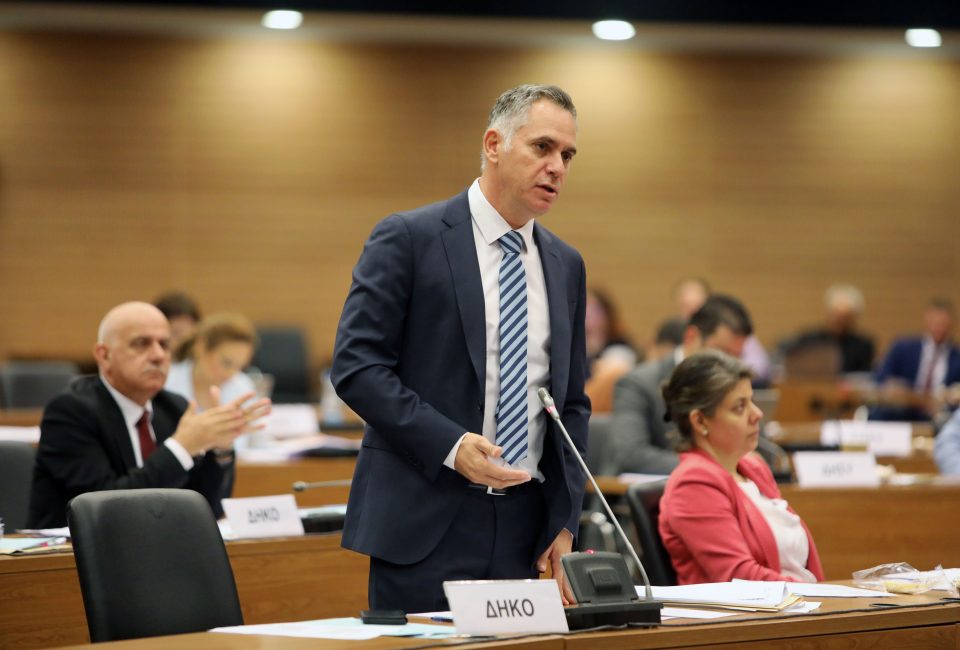 People need to know President Nicos Anastasiades’ intentions on the Cyprus problem, Diko leader Nicolas Papadopoulos said on Tuesday, pointing out that just days before the five-party summit in Geneva the president has still not elaborated on his idea of a decentralised federation he will table.

In an online press conference on the Cyprus problem, Papadopoulos expressed concerns that, in essence, the change of the solution basis will be agreed on at the Geneva summit but “they will try to deceive the people, that what they are discussing is not a confederation but a federation.

“Unfortunately, all the evidence shows that this is where we are headed,” Papadopoulos said replying to a question, adding this was political fraud.

Anastasiades maintains he will go to the summit with a constructive mood to help achieve progress so that the two sides can return to substantive talks for a federal solution.

However, Turkish Cypriot leader Ersin Tatar and Turkey insist on scrapping the agreed solution framework and want to discuss the existence of two states on the island with sovereign equality.

According to Papadopoulos, though Turkey and Tatar raise the issue of a two-state solution almost daily making their intentions clear, and with the UN secretary-general hinting that everything will be on the table, there can be no question of non-participation of the Greek Cypriot side from the summit because of Anastasiades prior acceptance to take part.

“In 10 days, we will go to the international conference and we still do not know what the proposal for a ‘decentralised’ and ‘loose’ federation which Anastasiades says he will table, includes,” Papadopoulos said. It is no coincidence, he added, that all the president’s interlocutors, from the archbishop to the Turkish foreign minister, have the impression that he is ready to discuss a two-state confederation.

Papadopoulos said there was no transparency regarding the Cyprus problem talks and what really is discussed.

The Diko leader also said Cyprus “has become Europe’s laughingstock”. He explained that a summit is to take place on issues exclusively concerning the Republic of Cyprus (RoC), but the RoC has not been invited to take part. He was referring to the fact that the parties invited to take part are the island’s two communities.

“A process begins, with a huge defeat on our side and a huge victory for Turkey,” he said, He reiterated that all references to the RoC have disappeared from the UN reports on Unficyp.

What needs to be done, he said, is for the basis of the negotiations to be clarified and that the UN will not accept the discussion of another form of solution – a confederation or two states. He also said that the RoC should be invited and be present at the five-party conference.

The island’s two communities and guarantors Greece, Turkey and the UK will participate in the UN-led informal summit to discuss the way forward on the Cyprus problem. The summit will take place between April 27 and 29 in Geneva.

However Foreign Minister Nikos Christodoulides reiterated on Tuesday that the two-state solution, which may be tabled by the Turkish side at the summit, was not even up for discussion.

The minister said the government’s effort focuses “on one and only goal, the bi-zonal bi-communal federation.”

The clear goal of the Greek Cypriot side in the informal summit is an announcement for the resumption of talks from where they left off in Crans-Montana, the minister told state broadcaster CyBC.

According to Christodoulides, the UN secretary-general’s main aim is to find out whether the parties involved have a common goal, and if this is achieved, it will be decided at what point the dialogue will resume.

He stressed that the Greek Cypriot side is preparing for all possible scenarios, but it would not be making its proposals public.

Almost all Greek Cypriot party leaders, except Elam, accepted Anastasiades’ invitation to join him in Geneva for consultations if necessary. Reports on Tuesday said that Tatar has also invited Turkish Cypriot political leaders.