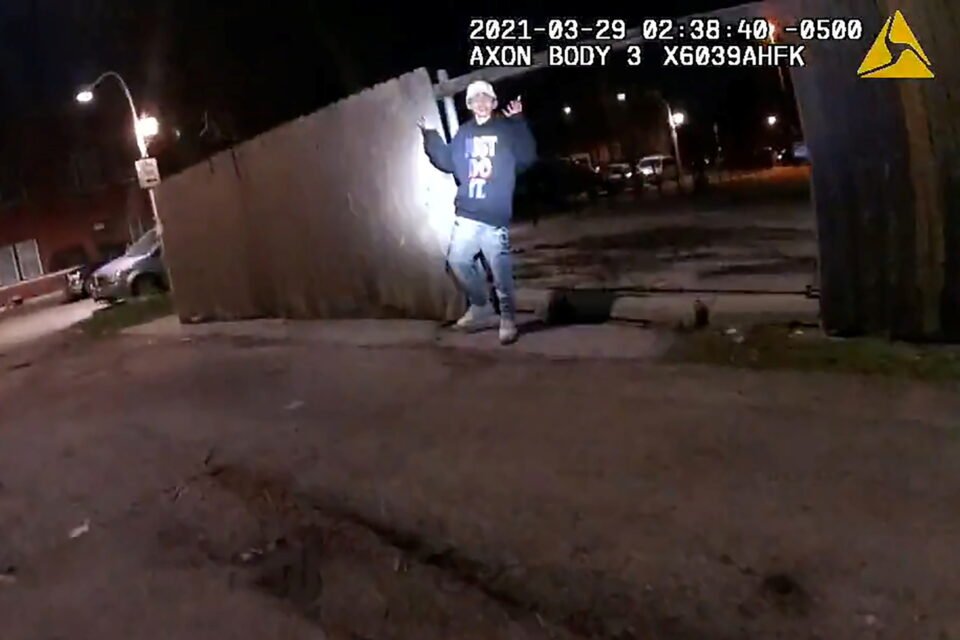 Adam Toledo, 13, holds up his hands a split second before he was shot by police in Little Village, a neighborhood on the West Side of Chicago, Illinois, U.S. March 29, 2021 in a still image from police body camera video. Image taken March 29, 2021. Civilian Office of Police Accountability/Handout via REUTERS. THIS IMAGE HAS BEEN SUPPLIED BY A THIRD PARTY. THIS PICTURE WAS PROCESSED BY REUTERS TO ENHANCE QUALITY. AN UNPROCESSED VERSION HAS BEEN PROVIDED SEPARATELY

Chicago officials released to the public on Thursday a graphic body-camera video showing a police officer shooting and killing a 13-year-old boy while he appeared to be raising his hands in an alley more than two weeks ago.

The nine-minute video from Eric Stillman’s body camera showed the 34-year-old officer getting out of his squad car and running after Adam Toledo in an alley at 2:30 a.m. on March 29 in Little Village, a Mexican neighborhood on the city’s West Side.

The video then showed Stillman yelling “Stop” to Toledo before he caught up to him and ordered him to show his hands. Toledo appeared to raise his hands right before Stillman fired one shot and then ran to the boy as he fell to the ground.

“Shots fired, shots fired. Get an ambulance over here now,” the police officer is heard saying in the video.

“Stay with me, stay with me” Stillman said. “Somebody bring the medical kit now!”

The Chicago Police Department said immediately following the incident that Toledo had a gun in his hand.

The release of the video was likely to rattle a nation already on edge over issues of policing, justice and race relations. Tensions were high on Thursday as a former suburban police officer in Minnesota appeared in court after she was charged in the killing last Sunday of a Black man during a traffic stop.

Hours earlier, the prosecution and defense rested their cases in the murder trial of former Minneapolis police officer Derek Chauvin, who is charged in the death of George Floyd, which ignited a wave of protests last year.

Chicago‘s Civilian Office of Police Accountability also released some 33 data files, including other police body-camera videos, footage from nearby security cameras and documents related to the March 29 incident.

One of the documents identified Stillman, who has been on the force for six years, as the officer who shot and killed Toledo. He has been placed on administrative duty.

The Chicago Police Department also released part of the same video on its website on Thursday. The department placed an arrow on a still frame, pointing to what appeared to be a handgun in Toledo’s right hand before Stillman opened fire.

“838 milliseconds between gun shown in hand and single shot,” the police department said in a caption.

About five minutes and 30 seconds into the video, the officer shines a flashlight on a handgun feet from where officers worked frantically to save Toledo’s life, giving him CPR.

Protesters critical of police gathered in central Chicago, some of them blocking traffic. They were met by helmeted officers on foot, social media images showed, but there were no immediate reports of conflict.

An attorney for the Toledo family, Adeena Weiss Ortiz, told a news conference after the release of the video that Toledo complied with Stillman’s orders, dropped his weapon and turned around before the officer opened fire.

“I don’t know if the officer had enough time or not. All I know is the officer is trained to not shoot an unarmed individual,” she said.

Ortiz said the Toledo family wanted “justice for Adam, whatever that may entail. This is a very close, tight-knit Hispanic family. All of those who lived with him adored this child.”

Officers were chasing Toledo and a 21-year-old man after they received notification of eight shots fired in the area, the department said. The other man was arrested.

“There were a number of forces that met up at 2:30 in the morning on March 29 in an alley, and, simply put, we failed Adam,” Chicago Mayor Lori Lightfoot told a news conference before the video was released.

Several politicians at the state and national levels reacted swiftly to the video of the incident.

Illinois Governor J.B. Pritzker said in a statement that the moment called for justice for children and accountability in all public institutions.

John Catanzara, president of the Chicago police union known as the Fraternal Order of Police, told CNN the officer had only eight-tenths of a second to make the decision whether to shoot and his actions were justified.

“It is 100% justified. That officer’s actions were actually heroic,” Catanzara said.

Chicago officials and the Toledo family urged people to remain calm as the city prepared for civil unrest following the release of the video. They said more police officers and city equipment would be in place to protect businesses during any unrest.

The shooting has renewed calls for police reforms in the third-largest U.S. city. Chicago police have been under intense scrutiny since 2014 when a white officer shot and killed a Black teenager. He was later convicted of second-degree murder.