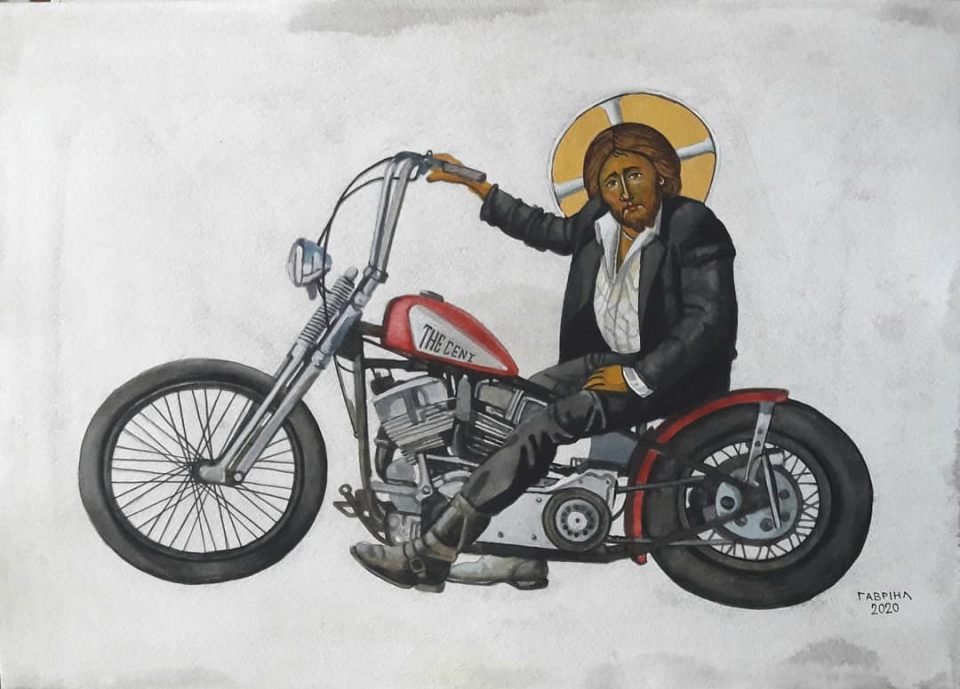 One of George Gavriel's controversial paintings

George Gavriel, the public school headmaster who published artworks critical of the archbishop and other key Cypriot figures, claims he is being investigated for his ‘national spirit’.

The row initially broke out back in September when Gavriel posted a series of artworks, which he calls ‘anti-systemic’, onto his personal social media platforms; which included a naked Jesus, a dog urinating on the archbishop, while in another, a dog is seen defecating on a statue of Eoka military leader Georgios Grivas.

The education ministry soon after launched a probe into the incident and at the time said the teachers’ paintings created “a sore impression” and have caused great upset among pupils, parents and public opinion.

But last week the education ministry called on him to answer by Thursday as to whether he had upheld ‘the national spirit’ within his school, Gavriel told the Cyprus Mail.

“Last week the investigating officer who is involved with the case issued a request for further details to see ‘to what extent we are implementing the patriotic programme for the students’,” Gavriel told us.

The implication being, Gavriel said, that there are suspicions that the programme and instructions from the ministry were not being carried out.

The education ministry is to look into whether Gavriel, in his capacity as headteacher, followed the ministry’s guidelines for national holidays and religious anniversaries; including parades, church services and so on.

Akel leader Andros Kyprianou waded into the dispute on Thursday, saying that according to research carried out by his party it indeed appears to be the case that such an investigation – that if during the exercise of his [Gavriel’s] duties he was cultivating the national spirit and followed the rules that provide for respect towards the institutions – is under way.

“We believe that the period when national sentiment certificates were issued is long gone, that happened during the junta period in Greece,” he said.

He further stated the education ministry’s investigation has the air of a witch hunt and is simply looking for a way to punish the teacher.

The fallout from the incident exposed a major cultural rift within society, as some social media users called for Gavriel to be hanged, imprisoned – or at least fired – while others praised his artwork.

Many politicians and other public officials were criticised for perceived hypocrisy after having proclaimed ‘Je Suis Charlie’ back in 2015 – when jihadists killed twelve people at the offices of French satirical weekly newspaper Charlie Hebdo, for having published ‘blasphemous’ cartoons of the prophet Muhammad.

A middle ground was sought by many established politicians, who essentially argued that: “While I may find Gavriel’s artworks personally offensive, there is an artistic freedom under the right to freedom of speech for him to publish them.”

Even so, at the time Disy MP Annita Demetriou said though freedom of expression was respected, there are limits when it insults symbols, institutions, human dignity and “the religious beliefs of an entire people.”

Commissioner for Administration and the Protection of Human Rights Maria Stylianou-Lottides, in September, said that the teacher “exceeded the limits to which freedom of expression is subject by law, and infringed the rights of others through his art.”

“Because of his unique role as both teacher and artist, Gavriel has failed to take into account the impact of his work, using Christ to shock, provoke and anger a considerable number of people in Cyprus,” she said.

As for Gavriel himself, he told SigmaTV in September that: “I see Jesus as one of us, among football fans, refugees, protesters, people striking, I believe his place is among people, that is why I depict him as a simple person.”

The teacher also said he did not believe the artistic expression of an artist was of any concern of the education ministry, which, he said, was also the ministry of culture.

Our View: There is no justification in a democracy for persecuting artists