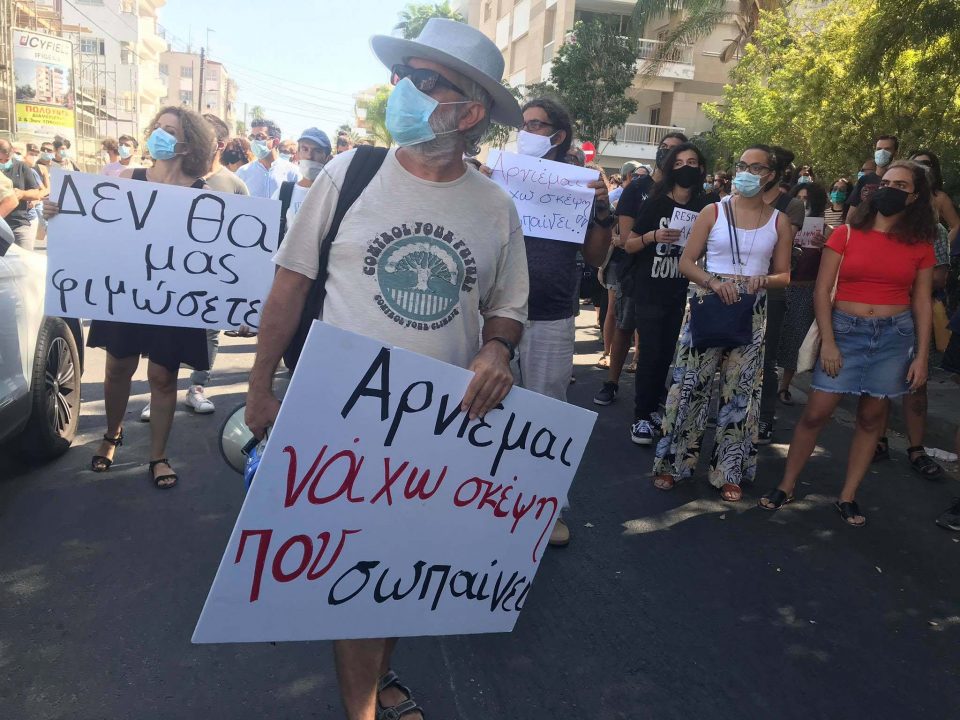 A demonstration in support of George Gavriel, an artist and teacher at a state high school who has come under fire after releasing some of his latest paintings on social media, took place on Friday afternoon in front of the education ministry in Nicosia.

Some of his works are religion-themed with one depicting a naked Jesus and another a dog urinating on the archbishop.

The paintings have been branded inappropriate and, as a result, the government has already launched a disciplinary inquiry on his work.

Around 250 people wearing masks, took part in the demonstration, with placards, and united in what they consider to be “an affront to the basic human right of freedom of expression in Cyprus.”

“What has happened to Gavriel is outrageous for a democratic country,” said Maria, a teacher from Nicosia who participated in the demonstration.

“What we are witnessing is a clear failure to separate matters of state from matters of the church, a trend that is sadly more and more common with the current government.”

Heavy criticism was also directed at Education Minister Prodromos Prodromou, who according to another demonstrator, Loucas, a fine arts student at the University of Nicosia, “has failed to fulfil his role in an impartial and detached attitude.”

“Sometimes we forget how backwards Cyprus still is in such matters,” he said.

“Prodromou has apparently forgotten that he is not just the education minister but also the minister of culture, which should prompt him to encourage critical thinking and not to act as a mouthpiece for the government and the church.”

The Cyprus Chamber of Fine Arts (Ekate) has also expressed its support to Gavriel, after it released a statement on Friday calling the reaction to his works “an unacceptable attitude of the state regarding the freedom of expression.”

“It is sad to see that in a modern and democratic country we still witness such behaviours.

“Gavriel is a hard-working and devoted teacher, who has dedicated his life to passing on to his students the love for art. On top of that he promoted several activities and competitions among artists and students and supported every colleague who ever needed his help,” the statement said.

Moreover, Ekate argued that the government’s attitude denotes a complete disregard for freedom of expression.

“Freedom of expression is a basic human right and an essential element of art. Therefore, it is disturbing to see how voices are being silence and art is being censored,” the statement concluded.

However, not everyone agree with the demonstrators and with Ekate’s point of view regarding the matter.

In the letter, the archbishop assured Prodromou that “the Church’s intention is not to censor or restrict anyone’s freedom of expression.”

“However, in this case, the artist has far exceeded the limits of exercising his rights due to the vicious way he portrayed our Lord Jesus Christ. He has offended the sacred feelings of our people.”

“It is completely unacceptable to insult God in a country when Christian values are so deeply rooted within the community. That is why we humbly believe that Gavriel should resign from his job as it is impossible for him to continue working as a teacher,” the letter concluded.

On the same wavelength of the archbishop was the Commissioner for Administration and the Protection of Human Rights Maria Stylianou-Lottides, who said on Friday that the teacher “exceeded the limits to which freedom of expression is subject by law, and infringed the rights of others through his art.”

“Because of his unique role of both teacher and artist, Gavriel has failed to take into account the impact of his work, using Christ to shock, provoke and anger a considerable amount of people in Cyprus,” she said.