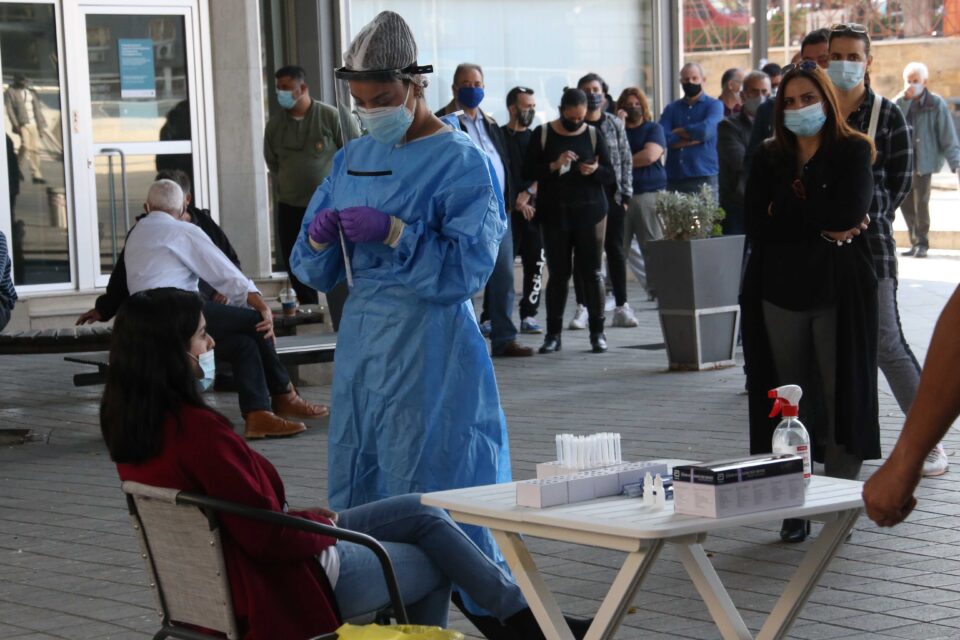 Greece has a higher positivity rate than Cyprus, but is deemed a safer country to visit

The health ministry is taking pride in the daily number of Covid-19 tests, probably the highest in the EU in proportion to population, but this has resulted in a high number of daily positive cases prompting the European Centre for Disease Prevention and Control (ECDC) to dump Cyprus in the least safe, dark red category.

This could have negative consequences for tourism with people less willing to travel to a ‘red’ country, a point made recently by the president of Pasyxe (Cyprus Hoteliers Association), Haris Loizides, at the ‘Restarting Hospitality Summer 2021′ conference.

Loizides said Cyprus had become the victim of its successful rapid testing programme since its introduction last October, because carrying out so many daily tests meant a large number of cases was reported every day.

“We are the first in Europe in tests performed. We test, let’s say, around 40,000 people per day and detect around 400 cases, whereas other countries, like Greece, test much less, around 18-20,000 per day and get 1700-1800 cases,” he told the conference earlier this month. “Nevertheless, our numbers remain high due to the high number of tests. Unfortunately, this puts us in the ECDC’s red category while other countries, which test much less, are in the orange category, making it much easier for them to kickstart their tourist industry.”

Since that conference the number of daily tests being carried out has exceeded 50,000. On Friday Cyprus carried out 69,068 tests resulting in 677 cases but a positivity rate below one per cent (it was slightly above the previous three days). On the same day Greece, with 10 times the population, carried out 65,000 tests, had 3,067 cases and a positivity rate of about 4.7 per cent.

However, the ECDC map does not take into account the positivity rate, putting Cyprus in the dark red category. It has a much higher number of cases per 100,000 than Greece. According to Johns Hopkins University Covid-19 data regarding the ‘Daily new confirmed Covid-19 cases per million people’ Cyprus had the second highest number, after Sweden. On April 11, for example, it had 618.47 cases per million people compared to Greece’s 275.02.

Yet on Friday Cyprus’ positivity rate was 0.98 per cent whilst its deaths per 100,000 are the second lowest in the EU at 30. Loizides had warned at the conference that if the ECDC method of evaluating the risk of a country remained, the high number of daily tests would start causing problems for the industry.

Pasyxe has prepared a letter to be sent to the ECDC and the European Commission this week, about the country risk categorisation.

“I will make the point that they are penalising a country that is following a rigorous testing regime to control the spread of the virus,” Loizides told the Sunday Mail. There were countries in the orange category, not because their epidemiological picture was better than Cyprus’ but because they were not testing enough of the population, he said.

Fears about the ECDC categorisation were also expressed by a tour operator during a teleconference Loizides took part in on Friday. He said, while several tour operators praised Cyprus for its exemplary handling of the pandemic and the safety protocols it had in place, there were concerns about the high number of daily cases.

“One operator told us, ‘you will have a problem if a government decides that its nationals cannot visit a country with more than 200 daily cases per million people,’ which is an issue,” Loizides told the Sunday Mail. “Unfortunately, more tests mean more cases which put us in a bad light.”

Ironically, the government believed that an intensive rapid testing programme would promote Cyprus as a safe destination that was efficiently managing the spread of the pandemic, something Pasyxe also originally agreed with, but they now think the policy has backfired and could have adverse consequences for tourism.

On a positive point, people in Cyprus’ main tourist markets – UK and Russia – might not consult the ECDC country categorisations. The government of neither country has Cyprus in the red category.

Demolition is the easy job

Vaults of nature: the freerunning feats of Sydney Olson