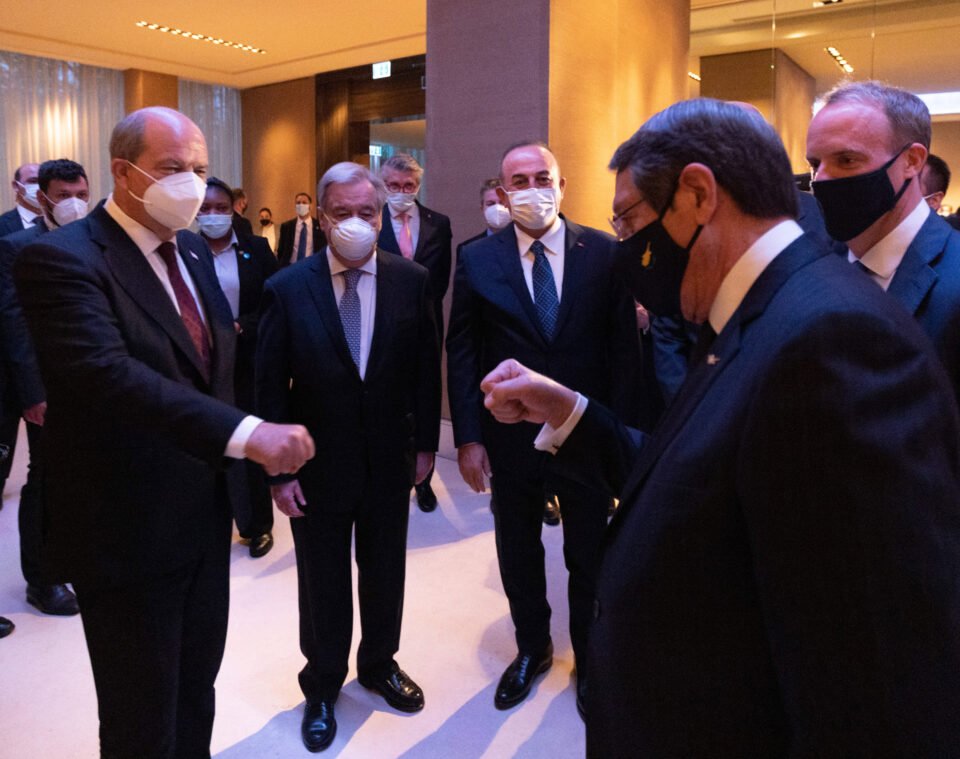 The two leaders had the opportunity to each explain to UN Secretary-General (UNSG) Antonio Guterres their visions for the future of the island during the first day of the informal summit on the Cyprus problem that started in Geneva on Tuesday.

The first day was aimed at Guterres hearing the positions of the two leaders. He first met Turkish Cypriot leader Ersin Tatar and then with President Nicos Anastasiades.

After the meetings, which began in the afternoon, both said they had the opportunity to elaborate on their positions and visions.

Tatar, who was the first to meet Guterres, said the meeting was productive and that he explained his positions without backing down.

“I don’t need to repeat what we said. We maintained our positions. He himself knows that we are hostage in Cyprus. After all, he led the negotiations in Crans-Montana,” Tatar said on his way back to the hotel.

He also expressed confidence in Guterres’ experience with the Cyprus issue and knowledge of the process and said there would be intense consultations on Wednesday and Thursday.

Though he did not say if he tabled a two-state solution, his spokesperson, Berna Celik Dogruyol, said Tatar expressed the position of the Turkish Cypriot side on sovereign equality and equal international status.

The UN chief then met with Anastasiades. The president was accompanied to the meeting, which lasted around an hour and 45 minutes by chief negotiator Andreas Mavroyiannis, head of the president’s diplomatic office Kyriacos Kouros, the legal advisor to the negotiating team, Konstantinos Kompos, member of the negotiator’s office Adrianos Kyriakides and member of the diplomatic office, Pantelis Pantelides.

After the meeting, it was announced that Anastasiades’ meeting with Guterres was “a very useful one” and that the president had the opportunity to highlight the need to resolve the Cyprus issue within the parameters set by the UNSG himself.

Anastasiades analysed in detail the vision for the Cyprus issue, stressing that the day after the solution ought to contribute, not only to the prosperity of all Cypriots but also to security and stability in the region.

Referring to his proposal, the statement said, Anastasiades stressed the need for a functioning and effective state within the European Union. He also stressed the need for the solution to create conditions of security in the country in such a way that the perception of the security of one community did not pose a threat to the other community.

Sources recalled that the effort is to bring the Cyprus issue back on the track of negotiations, which is the main goal of the interventions of the president.

They said that during their meeting, Anastasiades also pointed out to Guterres the north’s dependence on Turkey.

He referred to the strong reaction by the Turkish president on the decision a few weeks ago in the north over the Quran courses in schools stressing that Turkey sees the Turkish Cypriots as vassals. Anastasiades, raising concerns over the dependence of the north on Turkey, also told Guterres that when he first met with Tatar in November 2020, the Turkish Cypriot leader told him that he would do what Turkey told him and that Cavusoglu would be in charge of discussions.

Guterres also briefed Anastasiades about Tatar’s positions, and insistence on a two-state solution. “We did not expect anything else,” a source within the GC side said.

Anastasiades, the same sources said, asked Guterres, as part of his mandate, to make a creative intervention within the UN framework as he had done at the talks in Crans-Montana in 2017 to find a way out of the impasse created due to the Turkish stance.

He also referred to confidence-building measures he has already suggested to facilitate positive developments and prevent illegal actions by Turkey both in Famagusta and Cyprus’ exclusive economic zone (EEZ). These concern Varosha going under UN administration to allow the return of the lawful owners and the Tymbou airport going also under UN so that it can open to international destinations and lift the so-called isolation of the Turkish Cypriots. He also suggested the operation of the Famagusta port under EU rules and the creation of an escrow account where the share of the proceeds from the exploitation of natural resources for the Turkish Cypriots will be deposited. The Turkish Cypriots will be able to withdraw money from this fund under the term that Turkey will not question Cyprus’ EEZ because this affects both Greek Cypriots and Turkish Cypriots.

Tuesday was a busy day for Anastasiades. Right after the meeting with Guterres he met the Greek foreign minister, Nikos Dendias for coordination ahead of Wednesday’s and Thursday’s meetings. Due to changes to the schedule of the summit, there is great possibility that the meetings may continue into Friday. They were due to end Thursday afternoon.

Anastasiades and Dendias, during their meeting, reviewed the situation and agreed on certain initiatives Greece and Cyprus would take in view of developments both within the framework of the informal five-party summit and beyond.

Guterres is scheduled to hold bilateral meetings with each of the parties on Wednesday and later preside over a plenary session at the Palais des Nations, the UN Office in Geneva.

The UN reiterated that the purpose of the informal summit was to determine if there was common ground for the parties to negotiate a lasting solution to the Cyprus problem within the foreseeable future.

Whether common ground will be found, it remains to be seen given the divergent positions of the two sides. Guterres’ spokesperson Stephane Dujarric said on Tuesday the UN chief was “realistic” about the chances of making progress. A source at the Palace of the Nations which is close to the talks told the Cyprus News Agency that expectations for the informal meeting were not very high.

Guterres was accompanied to the meetings by UN Under-Secretary-General for Political and Peacebuilding Affairs, Rosemary DiCarlo, his Special Envoy on Cyprus, Jane Holl Lute and his Special Representative in Cyprus Elizabeth Spehar and other UN officials.

The UN Secretary-General, after the meetings, held a small reception for the heads of the five delegations. Anastasiades was accompanied by Mavroyiannis and Kouros.

Later in the night, Anastasiades presided over the National Council where he briefed the party leaders about his contacts.

The Greek Cypriot side was forced to take a stand over “rejoicing”, as it said, by the Turkish side that Tatar was accompanied to Geneva by the ‘foreign minister’ and that this was a sign of recognition of the north.