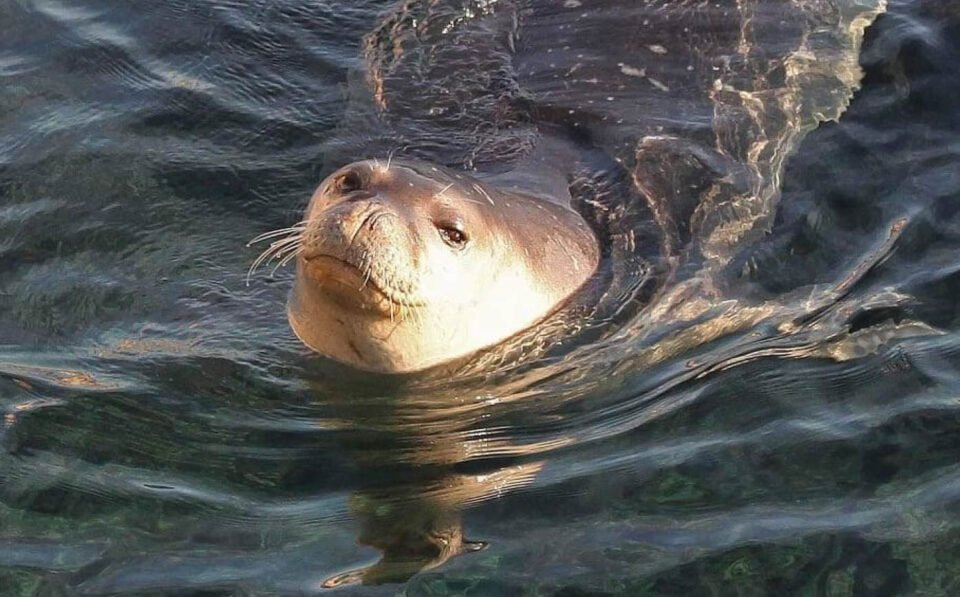 Around 19 of these rare creatures are currently along Cyprus' coast

Some of the major threats to this majestic animal are: tourist activities and related marine recreational practices, increased urbanisation levels in surrounding areas, the loss and destruction of their habitats and overfishing of their prey.

The Mediterranean monk seal Monachus monachus has been recently recategorised from Critically Endangered to Endangered on the IUCN Red List global assessment due to the increase in population size over the last few years.

The global species population is listed with fewer than 700 individuals of which approximately 350-450 are mature individuals. Today, the distribution of the Mediterranean monk seal in the Mediterranean Sea is recorded at the islands of the Ionian and Aegean seas, along the coasts of mainland Greece, Cyprus and southern and western Turkey. There also have been some sporadic sightings of individual monk seals in Syria, Lebanon, Israel, Egypt, Libya, Spain, Italy, Croatia and Albania.

Since 2009 the number of sightings of the Mediterranean monk seal have increased with most sightings (95 per cent) recorded as juveniles and adults and only 5 per cent of sightings being new-born pups. Currently there are 17 suitable monk seal shelters covering a total of 370 km of a coastline.

Until 2009, it was believed that the species was close to extinction in Cyprus. The increased recent sightings of pups, juveniles and adults over the last years and the suitability of habitat on the island indicates that there is a permanent population of the Mediterranean monk seal in Cyprus.

Interactions between fisheries and marine mammals have been reported throughout the world often causing some serious adverse effects on the conservation of certain species. These interactions are mostly caused due to depredation of the catch by marine mammals often causing these animals to unintentionally get caught on fishing gear.

Depredation, the act of partially or completely removing caught fish and other marine organisms by large marine predators such as marine mammals, could significantly reduce the value of the catch and significantly increase operating costs but also increase the chances of entanglement.

Such interactions had pushed the Yangtze River dolphin (Lipotes vexillifer) to extinction and currently the vaquita (Phocoena sinus) is in the same fate if no immediate conservation measures are taken.

Accidental entanglement of the Mediterranean monk seal on fishing gear has been reported in Greek fisheries which has been identified as the main cause of mortality. The bycatch, the incidental capture of non-targeted species in fishing gear, of the Mediterranean monk seal affects mainly inexperienced young individuals. Such events have been reported to cause deliberate killing by fishermen due to the damage caused on fishing gear and catch.

The major threats to the Mediterranean monk seal in Cyprus are tourists’ activities and other recreational practices close to monk seal caves and feeding grounds, the increased urbanisation levels in the surrounding areas, the loss and destruction of their habitats and overfishing.

The Mediterranean monk seal is legally protected through numerous national laws and regional and international treaties as well as European Union regulations. The Mediterranean monk seal has been a protected species in Cyprus since 1971 under the Fisheries Law and has since then been also included in the Annex II protocol which concerns Specially Protected Areas and Biological Diversity (SPA Protocol).

With the marine and terrestrial habitat for the Mediterranean monk seal being highly specific, the designation of Special Areas of Conservation (SACs) has been deemed necessary for their conservation. This has also been partly the reason for their categorisation as a priority species in the European Habitats Directive, which was later transposed into national legislation under the Law on the Protection and Management of Nature and Wildlife. It is under the above law that the Natura 2000 Network was set up in Cyprus. The species is also protected indirectly by other national fisheries legislations.

The ‘Monk Seal Conservation in the Eastern Mediterranean’ project is a 21-month long project in Cyprus that is funded by Mava Foundation and is implemented by the partnership of Enalia Physis Environmental Research Centre, Cyprus Wildlife Society (CWS) and Society for the Protection of Turtles (SPOT). The project aims mainly to improve the knowledge between small-scale fisheries and the Mediterranean monk seal in Cyprus and understand the type and extent of interactions between them. The results of this project could significantly support actions towards the conservation of the Mediterranean Monk seal in the Republic of Cyprus by mitigating the interactions with the fishing industry.

Additionally, with the aim of enhancing the conservation actions of the project and to raise the public’s and fishermen’s awareness for the Mediterranean monk seal, Enalia Physis produced and disseminated Monk seal awareness infographic slates as well as a children’s story book which are freely available on Enalia’s website (https://enaliaphysis.org.cy/resources/).

The main results of this project have shown that:

The second phase of this project will aim mainly to educate and raise awareness to the general through information centres, public lectures, awareness material and school lectures. The second phase will also aim to improve monk seals’ selected habitats by attending to remove litter that is being accumulated inside the caves of breeding and resting caves.