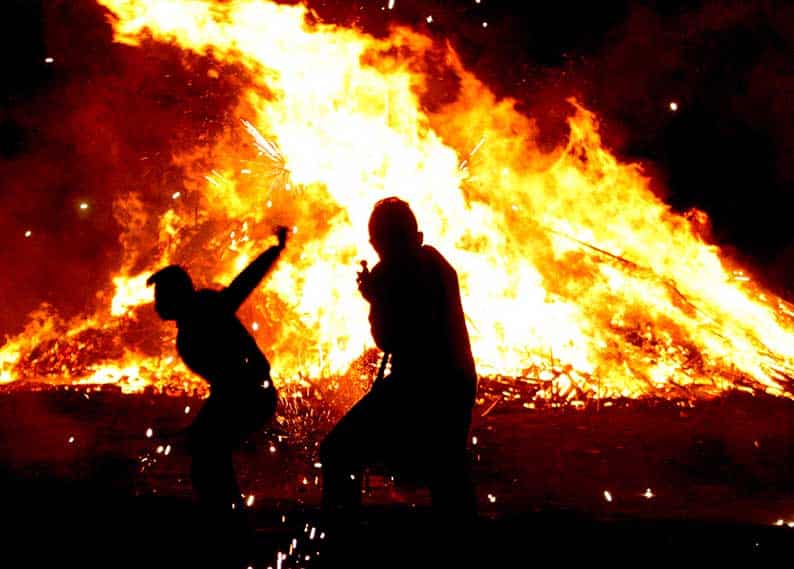 By Jean Christou and Evie Andreou

The Cyprus Police Association on Monday condemned attacks on police officers and firemen during the weekend by young people who hurled stones at them and even set a patrol car on fire.

Both police and fire service officers found themselves in very difficult situations during the Easter period with people hurling firecrackers and fireworks, and lighting bonfires that on several occasions spread to surrounding areas, setting rubbish bins on fire, and attacking officers who were retrying to restore order.

The Cyprus Police Association condemned “the unacceptable events that took place in recent days”, related to attacks against police and firemen but also damage to private property.

The association said that once again the incidents concern violence coming from young people.

It observed that due to the conditions created due to the coronavirus pandemic “frustration, futility and resentment are predominant emotions, especially among young people” but that in no case is the violent release of these emotions with delinquent behaviours allowed or justified.

It called on families, the education system and society in general “to assume their responsibilities” by holding back and helping young people calm down.

The association warned that it will not tolerate attacks against police officers, “who, in the context of their vocation, become a ‘scapegoat’.”

On Saturday night, during patrols islandwide to stamp out illegal bonfires, two officers in the Ayios Nikolaos area in Limassol just got out of their patrol car on time before the vehicle was engulfed in flames when someone threw a Molotov cocktail into it. The patrol car was destroyed.

Police said on Sunday they had dealt with more than 700 incidents of harassment, firecrackers and other related offences during Holy Week.

In the context of combating the phenomenon of juvenile delinquency during the Easter period, a total of 22 people were arrested, police said. The arrests mainly concerned young people, with 19 of those arrested between the ages of 15 and 22.

Due to the Covid decrees police, in cooperation with municipal and community authorities, carried out inspections to locate wood, old tyres, furniture and other objects slated for illegal bonfires.

“On several occasions, our members were attacked by people throwing fire crackers and Molotov cocktails, causing one police vehicle to be completely destroyed and extensive damage to another,” it added.

Meanwhile, Justice Minister Emily Yiolitis tweeted that the tolerance and understanding shown by police to the public when it comes to Covid measures “should not be interpreted as weakness”.

“We will do whatever it takes to deal effectively with the pandemic and all other asymmetric challenges before us,” she added.

Fire service spokesman Andreas Kettis told Alpha TV on Saturday that the fires they were called to put out were in residential areas, dry vegetation and rubbish bins.

“We are going through a difficult time, both us and the police,” Kettis said, arguing it was unacceptable that some people, especially minors, were setting everything in sight on fire just because it was Easter.

Paphos police said on Sunday that groups of young people in various areas, also tried to light  bonfires late on Saturday despite a ban on such activities.

In the village of Panagia they tried to light a fire in the village churchyard but were stopped by a police patrol. Reports said the youngsters at first refused to comply and were aggressive towards officers, but the situation didn’t escalate and they youngsters moved off. Police said they responded to five such incidents during the early hours.

In Nicosia too, loud explosions were heard, and people reported fires in their areas caused by the firecrackers and bonfires.

“I have never heard so many police sirens on an Easter weekend before,” a Nicosia resident told the Cyprus Mail on Monday. “It was like a war out there, people went mad.” She also said that Turkish Cypriot friends living in the north of Nicosia, were concerned by the explosions during the past few days and asked on Easter Saturday evening what was going on.

The police officers’ branch of Isotita (Equality) trade union, on Sunday warned it would have to take action before officers or firefighters were killed.

“We feel that we have no choice but to take unprecedented measures as an organisation because we do not want to see dead police officers and firefighters,” the group said. It did not specify what those actions might be but did call on all security forces to realise “we are on our own.

“No one seems to have heeded our warnings,” their statement said, adding that violence against the security forces was increasing and was being fuelled by “anger and hatred”.

“Whenever the police imposed order with similar violence some people rushed to appoint criminal investigators to attribute responsibilities, and now we are experiencing absolute anarchy,” it added.

The group called on the police and political leadership to listen to front-line officers.

“Everyone should take on their responsibilities before the time comes when their hands will be red with the blood of members of the security forces,” it concluded.

“What is happening in the past few days and nights by some young people, spreading fires all over free Cyprus invoking the holidays, is really unbelievable. Those who are living this understand how dangerous it is. You try to do your job and you are rained with stones and firecrackers, risking losing an eye or even your life. My friends this is not funny, we also have families waiting for us at home. In the name of God, stop before there is a great evil and someone loses his life.”

During a recent protest in Nicosia, police were slammed for using excessive force, including a water cannon on peaceful protesters. Several people were injured during the incident following the heavy-handed tactics.

First 40C of the year recorded in Nicosia