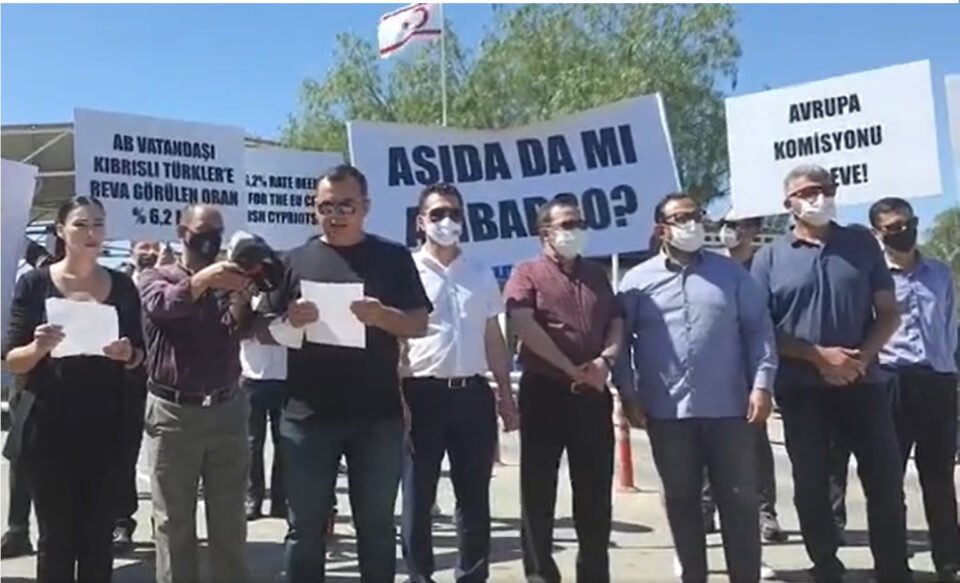 Turkish Cypriot business groups on Tuesday called on the EU and the Greek Cypriot side to rectify what they called the unjust distribution of Covid-19 vaccines to the north.

Representatives of the Economic Organisations Platform held a protest at the Ayios Dhometios crossing against the Turkish Cypriots’ “unfair treatment” as regards the distribution of the vaccines secured for Cyprus by the EU.

The group, that represents the Cyprus Turkish Chamber of Commerce (KTTO), the chamber of Industry (KTSO), the construction contractors association (KTİMB), and the hoteliers association (KITOB), denounced “the unjust and non-transparent distribution of the Covid-19 vaccines secured by the EU for the Turkish Cypriots.”

Citing reliable sources, the group said that the EU has sent 482,965 vaccine doses to Cyprus so far and though deliveries to the north should have reached more than 100,000 doses by now, only 30,050 have been delivered to the north so far.

They said this was unacceptable. “We strongly condemn this unfair treatment,” they said.

A fair distribution of the vaccines, they said, was not only a human right but also a fundamental requirement for the Turkish Cypriots, who live in isolation, so that they can continue their economic activities.

They added that the Greek Cypriots and EU officials announce Turkish Cypriots are EU citizens at every opportunity but, “it seems they have forgotten our EU citizenship even if the issue is the measures to be taken against the pandemic.”

The group called on the EU and the Republic’s authorities to ensure transparency and fairness in the distribution of the vaccines.

“We demand that this injustice is rectified without delay,” they said.

The Republic arranges for deliveries of part of the vaccines secured by the EU for Cyprus to the Turkish Cypriots. Another 6,000 AstraZeneca vaccine doses were delivered to them on Monday via the technical committee on health.

In the meantime, ‘MP’ of main opposition Republican Turkish Party (CTP) Fikri Toros called on the Turkish Cypriot authorities to act with urgency as regards arrangements on the EU’s Digital Green Certificate, a proposal by the Commission to facilitate the safe free movement of people within the EU during the Covid-19 pandemic.

Toros argued that the Turkish Cypriot authorities ought to act quickly on this matter to ensure the normalisation of tourist arrivals to northern Cyprus, both from Tymbou airport and from the crossing points. He said that it was important since the north relies heavily on tourism.

“The Turkish Cypriot leadership on one hand must start a dialogue with the Greek Cypriot side for the opening of the crossings and on the other launch initiatives with EU officials on being included in the safe destinations list,” Toros stressed.

He also urged the leadership to submit epidemiological data on the pandemic in the north to World Health Organisation (WHO) based on the required criteria to avoid the north being labelled as an “unknown grey area.”

Most Turkish Cypriot parties call for the opening of the crossing points, citing the bad economic situation in the north and arguing that if people could cross from the south, it would give a financial boost to businesses including petrol stations, supermarkets and pharmacies.

‘Foreign minister’ Tahsin Ertugruloglu told Yeniduzen newspaper that there was no timeframe on when the crossings, which have been closed for a year, would reopen. He said this decision lies with the committee of experts on communicable diseases which is the same team that decides on measures in the north against the spread of coronavirus.  He also said that the number of positive cases in the south will determine when the crossings can return to normal.

The north allows only workers, students and patients to cross between the two sides without having to quarantine, provided they test regularly.