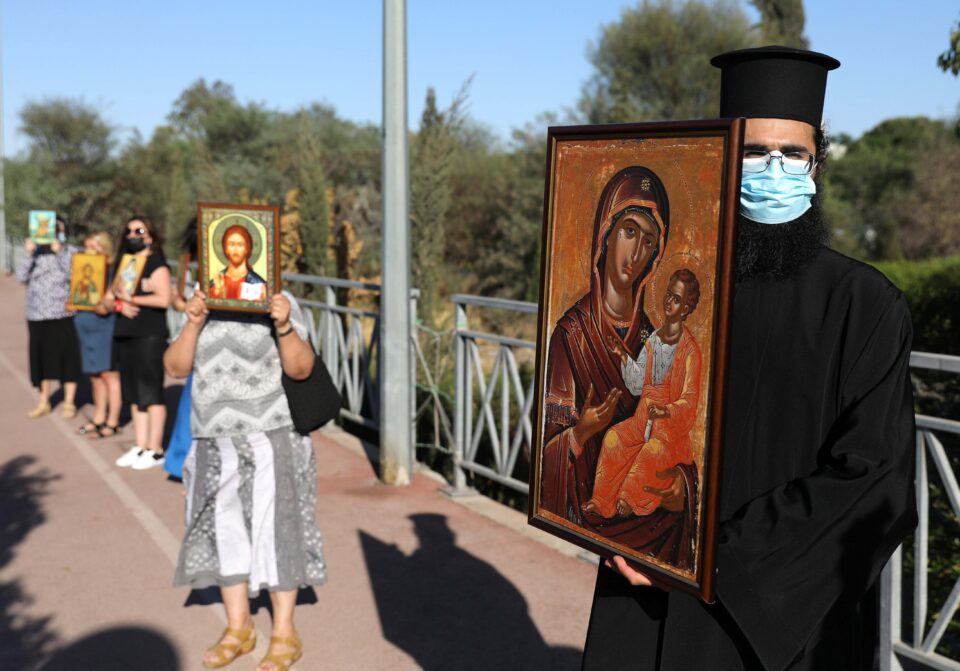 People hold icons during a protest against the song "El Diablo", Cyprus pick to represent the island at the annual Eurovision Song Contest outside the offices of the Cyprus Broadcasting Corporation in Nicosia on Wednesday

It may have won audiences in Europe, but Cyprus‘s entry for the Eurovision song contest has raised hackles at home, scandalising the faithful for paying homage to the devil.

“El Diablo” (The Devil), a dance mix performed by Greek singer Elena Tsagrinou, sailed through the first semi final of the contest held in Rotterdam on Tuesday night, securing a place in the May 22 finals.

Cyprus‘ influential Orthodox Church had waded into the fray when the song was unveiled in February, calling for the tune to be withdrawn. Thousands signed an online petition to that effect.

“We must get rid of this blasphemy,” said a Greek Orthodox priest who declined to be identified. “It is an affront to Cyprus, and a danger to our children.”

Amid the Orthodox chants, the sound of El Diablo was blasting from a nearby Cypriot household.

“This just promotes devil worship,” said protester Eleni Ioannou, 62. “The old Eurovision used to be so good. Its all satanic now.”

The Cyprus Broadcasting Corporation says the song is about the battle between good and evil.

El Diablo is not the only entry to the annual contest with a nod to Satan. Norway have their song “Fallen Angel” by the performer TIX, in chains and wearing white wings.

The Netherlands is hosting the 65th edition of the event, which draws a television audience of about 200 million, after Dutch singer-songwriter Duncan Laurence won the 2019 contest with the song ‘Arcade’.

The contest was not held in 2020 because of the COVID pandemic. Die-hard fans had to make do instead with the Netflix hit: “Eurovision Song Contest: The Story of Fire Saga” featuring a bumbling duo of soulmates, a giant hamster wheel, cult favourite Jaja Ding Dong and murdering elves.

Hamilton: perhaps Verstappen feels he has a lot to prove

Nicosia bike lanes project to be completed in October