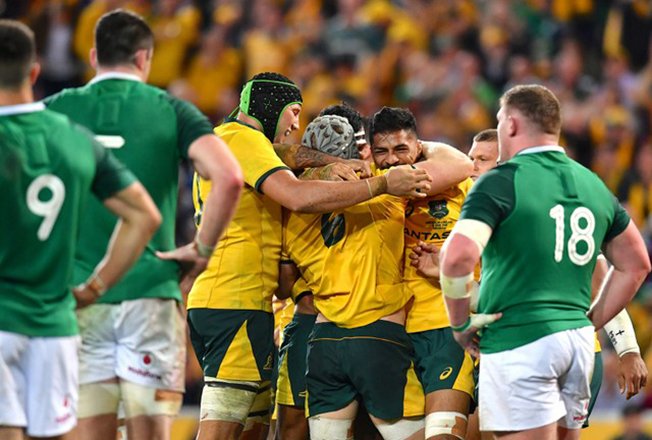 Australia has officially launched its bid to host the Rugby World Cup in 2027.

The country, which co-hosted the inaugural event in 1987 with New Zealand before holding the tournament won by England in 2003, announced its campaign at the Museum of Contemporary Art on Sydney Harbour.

Luminaries of the Australian game including two-time World Cup winners John Eales and Phil Kearns attended the launch on what Rugby Australia chairman Hamish McLennan called “an exciting day for all Australians”.

“Hosting Rugby World Cup 2027 is a once-in-a-generation opportunity for Australia, which would drive substantial economic outcomes for our country, while also providing a lasting legacy for rugby in this region,” McLennan said.

Australia captain Michael Hooper said hosting the tournament could be a “golden moment” for the country.

“I still remember the 2003 tournament and what it meant for Australia at the time,” the 29-year-old flanker who grew up in Sydney’s northern suburbs said.

“The atmosphere and vibe around the game was incredible.”

Australia back Reece Hodge told the crowd at the launch he had fond memories of the large contingent of England fans based at hotels on Sydney’s northern beaches during the 2003 event.

The tournament would cap a packed decade of significant sporting events for the country including the men’s cricket T20 World Cup next year, the women’s football World Cup in 2023 and the British and Irish Lions tour in 2025.

Kearns, who is leading the project as executive bid director, appeared to walk back comments made in August that rugby could become a “third-tier sport” in Australia unless it won hosting rights for 2027.

“I think we can do that (avoid rugby becoming a third-tier sport) without the World Cup, but again it will be a massive boost and provide a huge increase in numbers,” the 53-year-old said.

“Clearly the more kids you’ve got playing the game, the better the talent will be that comes through. I think that’s the critical piece.”

He said he had seen rapid changes in the code in the previous 12 months, during which Australia’s professional clubs shifted to play two modified Super Rugby seasons against each other before the current Trans-Tasman competition with New Zealand sides.

“I’m the most optimistic I’ve been about our game for a long, long time,” Kearns added.

Australia faces competition to host the tournament from Russia, whose bid received the backing of President Vladimir Putin in July.

World Rugby is expected to decide on the tournament’s host in May 2022.