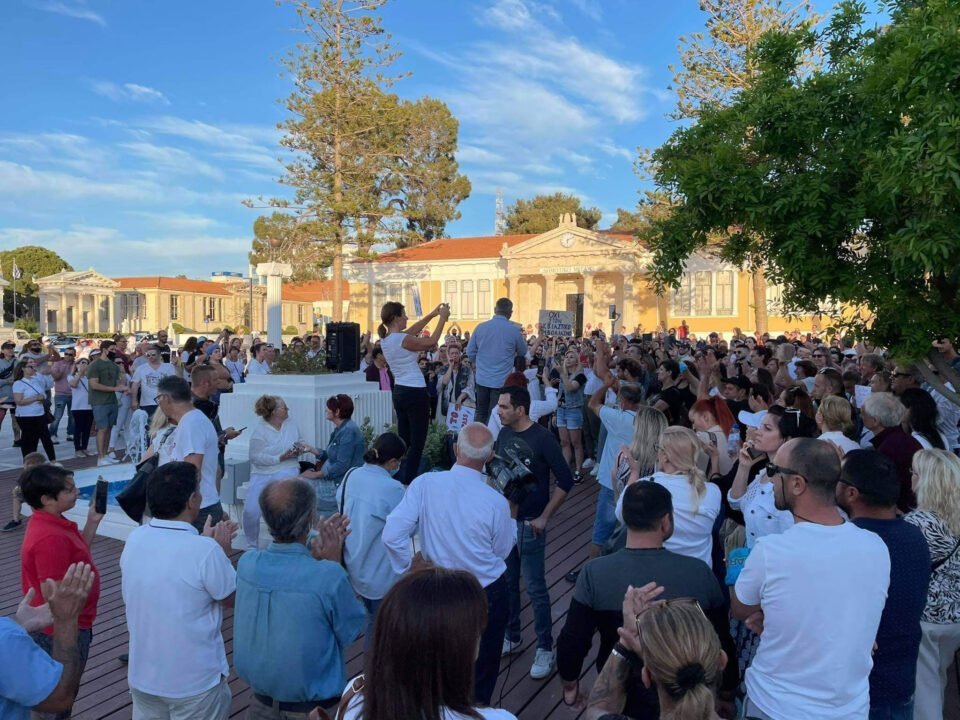 A photo from last week's protest

A second peaceful protest, a global ‘freedom rally,’ against the violation of fundamental human rights and tyranny in the wake of the coronavirus pandemic will be held in Paphos on Saturday.

The event will take place at Paphos town hall square at 6pm.

Last week the event protested against the so-called ‘SafePass’, masks, coerced vaccines and tyranny. The protest attracted around 500 people, according to Peyia councillor, Linda Leblanc, who attended.

The global initiative, ‘A stand in the Park’, has gathered support from numerous counties and is still gaining momentum.

“The movement is in over 100 countries, and hundreds of thousands of people gather every week. They value freedom, transparency and fundamental rights guaranteed by EU treaties, constitutions and so on. It has nothing to do with a ‘hugging festival’ and is not ‘anti-vaxx’, as it has been misreported in some media,” Leblanc told the Cyprus Mail on Friday.

Supporters of the initiative are concerned about the increasing pressure on people to get vaccinated, with onerous requirements for workers, she said.

To have to undergo tests, sometimes every 72 hours, is being successfully challenged, she added.

“There are also many reports of employers demanding employees be vaccinated and even some employees already being fired for refusing to be part of this medical experiment,” Leblanc said.

Supporters, she said, were in favour of full disclosure, protection of freedoms, informed consent and medical freedom of choice.

Leblanc said the current programme of “experimental injections” was part of an ongoing clinical trial, pointing out that the vaccines being used on the population have yet only received what is known as ‘emergency use authorisation’ and were not ‘approved’ vaccines as such since clinical trials are not due to end until 2023.

Leblanc is also part of an ‘EU Covid Citizens’ Initiative’, working on such issues in 21 EU member states, which includes lawyers, scientists and activists.

‘We protest for our FREEDOM and the future of our children. WE ARE NOT AN EXPERIMENT AND WE ARE NOT GOING TO BE, the movement writes on its Facebook page

The official line of the World Health Organisation (WHO) is that the Covid-19 vaccines are safe and effective and it advises everyone to get the jab as soon as possible.

Kylie Minogue breaks down 17 looks from 1988 to today