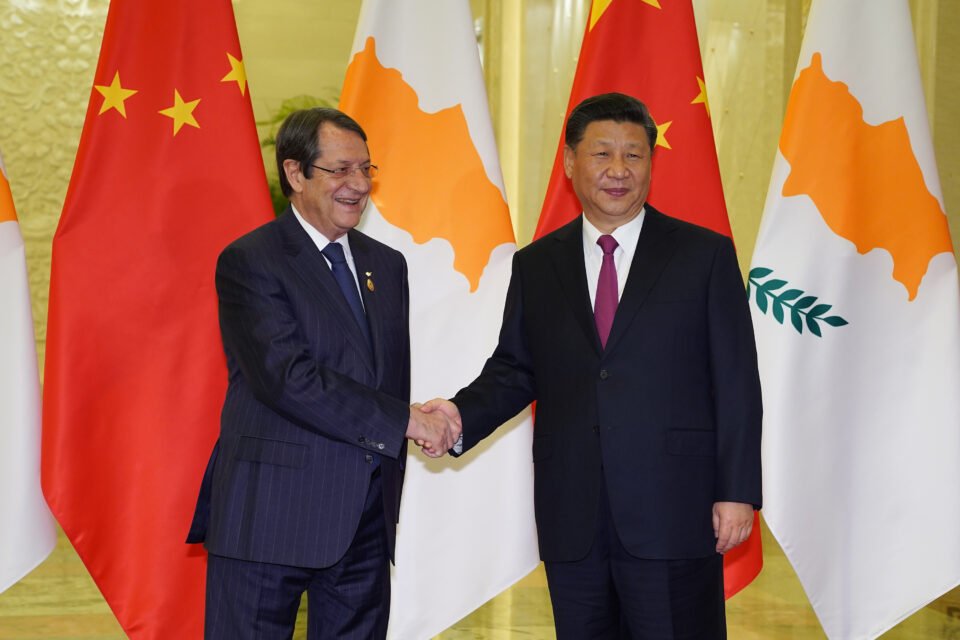 Cyprus may soon be in a position where it will have to choose between elements of its relationship with China, as a signatory to the ‘Belt and Road Initiative’(BRI) and potential legal and political consequences from the EU if it does not tread a more defined economic-foreign policy path.

The BRI is a global infrastructure development plan, central to the Chinese Communist Party’s (CCP) foreign policy to invest in up to 70 countries and organisations. Cyprus has been positioning itself as a strategic partner to the BRI through formal contact between President Nicos Anastasiades and President Xi Jinping. Support for China’s flagship foreign investment scheme is also echoed in the legislature, with an ex-president of the House of Representatives stating that Cyprus: “remains committed to further broadening the areas of our cooperation under the One Belt, One Road Initiative, ensuring the successful implementation of its mission”.

However, in light of ongoing political developments at EU level, Cypriot officials may find themselves needing to be more specific about what they understand the BRI’s ‘mission’ to be, and what aspects of it would be cogent to become tied to. Cyprus’ support for the BRI, in particular, goes beyond a vague set of commitments, with it having signed a number of Memorandums of Understanding with Chinese tech giants that have become economically essential to Cyprus’ 5G network.

The BRI has operated as the framework by which Chinese public funds have been used in the purchases of several EU country infrastructure assets, including ports, power plants and telecommunications facilities. This has been met by a growing sentiment in the EU that the China is functioning as “a systemic rival” promoting alternative methods of governance, not commensurate with common rules followed by WTO members. China is currently not part of the WTO’s Government Procurement Agreement (GPA) which establishes rules requiring that open, fair and transparent conditions of competition be ensured in government procurement, despite providing significant subsidies for purchases of foreign strategic infrastructure assets. While progress has been made in integrating China into the agreement, US and EU officials have stated that China’s policy structure is still far from the standards of other GPA members.

For the time being, it remains true that ‘third country’ subsidies in EU procurement processes and other operations are not subject to the same competition and trade rules as states within the EU. This has allowed economic entities that are the beneficiaries of large tax revenues, in particular those enjoyed by the world’s second largest economy, to give certain market actors asymmetric advantages.

In response to these gaps, a 2020 EU Commission white paper has proposed the establishment of a general market scrutiny instrument to capture all possible market situations in which foreign subsidies may cause distortions in the single market. It has also proposed an instrument specifically intended to address distortions caused by foreign subsidies facilitating the acquisition of EU targets.

The initiative enjoys general support in the EU Parliament and although the EU Council is divided as to some of the fine-print, there is a growing political trajectory to introduce robust rules on foreign subsidies. Cyprus and other EU partners of the BRI would likely not be able to form a sufficient block in the EU Council should they consider opposing such a move.

If such legislation is put in place, Cyprus and a number of other EU members that have coupled themselves to the BRI would only be able to provide conditional support to the framework where state funds are involved.

Cyprus has tied itself constitutionally to the EU, which follows a specific conception of market competition hardwired into its DNA. This brings with it a crucial distinction between what is a ‘public’ and the ‘private’ undertaking, not necessarily shared by the architects of the BRI. Some of China’s key multinational companies have been found to have inexorable links to the CCP and the Chinese state. For example, a UK parliamentary inquiry headed by the House of Commons defence committee found that there was “clear evidence of collusion between the Huawei and the CCP apparatus”. The committee cited a venture capitalist, who claimed the Chinese government “had financed the growth of Huawei with some $75bn [£57bn] over the past three years”, which he said had allowed it to sell its hardware at a “ridiculously low price point”.

Similar investigations under a potential formal process (investigating unusually low prices and purchasing patterns) monitored by the European Commission and the European Court would likely police such findings as distortions to trade.

Cyprus telecom firms, such as Epic and Cyta, rely on infrastructure equipment from Chinese communication giants, especially Huawei. This is the exact type of arrangement that would be under scrutiny if found to be the result of state support that unfairly prejudiced potential competitors.

Economic disruption could occur if the Cypriot government and industry do not follow the political and legal developments carefully and understand the regulatory risks the country could face. Uncoupling from infrastructure developments that are entrenched by dependence on particular technologies would be costly and painful if Cyprus were compelled to do it fast. A more principled and holistic approach to the BRI based on Cyprus’ trade commitments could avoid the consequences of conflicting obligations.

Jason Krentos is a PhD candidate

Euro on the rise; dollar on the fritz