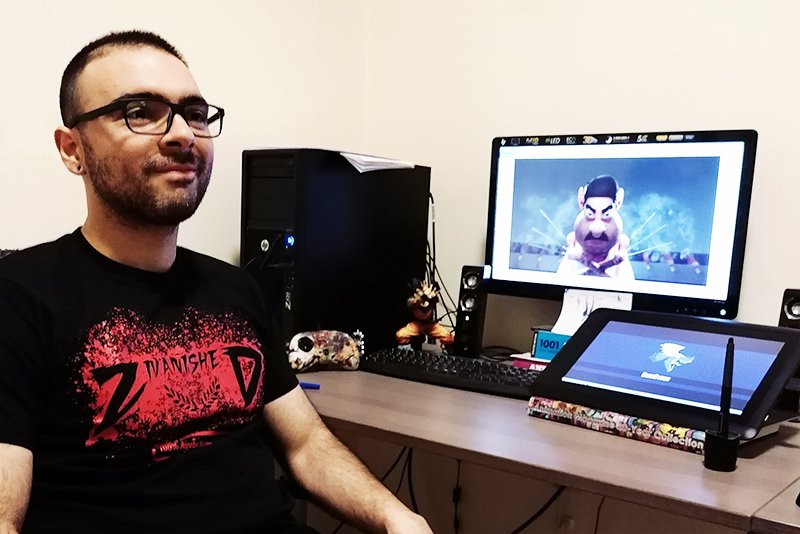 Where do you live?
In Aglantzia, with me, myself and my cartoons.

What did you have for breakfast?
Porridge with honey.

Describe your perfect day
Breakfast with my parents and brother and then either go to an animation or music festival with friends.

Best book ever read?
1984 by George Orwell, because even though it was published in 1949 and considered science fiction, it’s amazing how accurately it describes modern society and life.

Best childhood memory?
Playing on the hills in my neighborhood with my friends and brother.

What is always in your fridge?
Oranges

What music are you listening to in the car at the moment?
Mostly Thrash Metal

What’s your spirit animal?
I really like how bears are powerful, but don’t become aggressive without a reason. They are solitary and independent animals too, which I can also relate to, plus their roar is amazing!

What are you most proud of?
Finding the discipline (after work) to create my own short films and music videos, which have been screened at a variety of places. Also as a teacher I’d like to believe I’m encouraging students to be creative and love what they do.

What movie scene has really stayed with you?
The scene where Austin Powers runs over a guard with a steamroller. It’s just so ridiculous!!

If you could pick anyone at all (alive or dead) to go out for the evening with, who would it be?
Homer, the master storyteller.

If you could time travel when/where would you go?
It depends, if I could go and return at will, then the age of dinosaurs; otherwise the 80s!

What is your greatest fear?
Rats eating my face while asleep.

What would you say to your 18-year-old self?
Winning lottery numbers.

If the world is ending in 24 hours what would you do?
Spend my time with the people I love