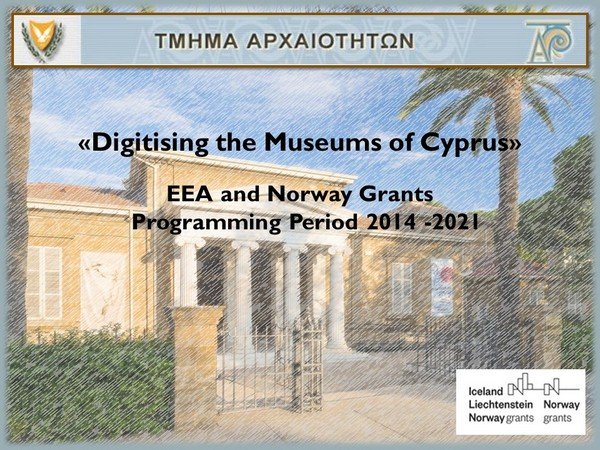 The Antiquities Department has started digitisation of ancient movable antiquities stored in the Cyprus Museum in Nicosia and on display in other state museums, it said on Tuesday.

The project, which got underway on May 4 and is being carried out under the programme “Digitising the Museums of Cyprus” is funded by the European Economic Area Financial Mechanism (EEA) and Norway Grants (Programming Period 2014 – 2021).

“The Department of Antiquities considers that digitisation can play a significant role in the management and protection of monuments, archaeological sites, and museums. It therefore commenced a large-scale digitisation project of cultural heritage in October 2009 that includes Ancient Monuments, Moveable Antiquities, Surveys, Controlled Areas, Areas under Expropriation: the ‘Cyprus Archaeological Digitization Programme’ (CADiP),” it said.

CADiP began in October 2009 as a European Programme, co-funded by the Norwegian Financial Mechanism and the Republic of Cyprus and ran until April 2011.

Following the completion of the European Programme, the digitisation of Ancient Monuments, Moveable Antiquities, Archaeological Surveys and Expropriations continues by Archaeological Officers of the Department of Antiquities using state funds, and by contract archaeologists from the private sector.

In the period November 2016 until November 2017, the Department of Antiquities employed two contract archaeologists: one for the digitisation of five archaeological sites and the other for the digitisation of 4,000 moveable antiquities, of which 3,000 were from the inventory of the Cyprus Museum and 1,000 were objects that had been declared missing as a result of the 1974 Turkish invasion. The programme ran for a period of 12 months and was financed by the budget of the Department of Antiquities.

At present the entries in the CADiP database consist of 20,217 moveable antiquities, 3,573 surveys and 1,595 ancient monuments.

The Department of Antiquities continues to set the digitisation of cultural heritage as one of its priorities. In order to reach its goal to digitise the artefacts on display as well as those kept in the storerooms of the state museums, the Department has commenced a large-scale programme with funding from the EEA Financial Mechanism and Norway Grands (Programming Period 2014 – 2021).

The work will be carried out by eight archaeologists who have been employed for a period of 31 months.