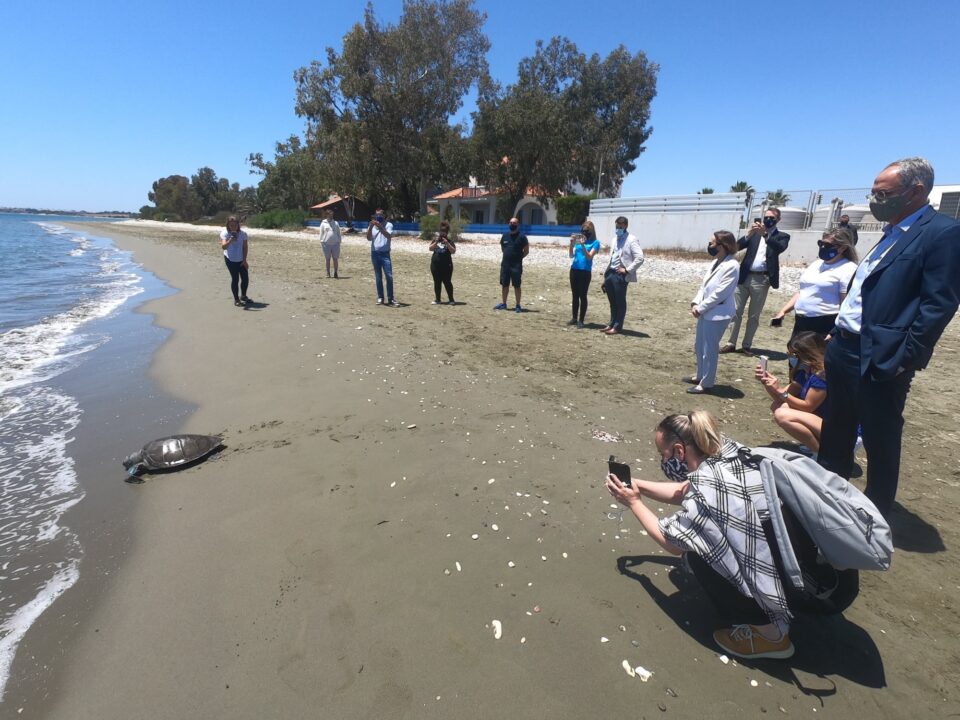 US ambassador Judith Garber on Tuesday joined Agriculture Minister Costas Kadis, department of fisheries officials and environment commissioner Klelia Vassiliou to witness the release of Iole, a 73kg Green turtle, back into the sea after 10 months of rehabilitation.

Garber’s visit to the Cyprus Marine Aquaculture Research Centre (CyMARC) in Meneou came on UN World Oceans Day, and she was briefed about the activities of the Centre and its protection and conservation of marine turtles (Chelonia mydas and Caretta caretta) in Cyprus, as well as the Mediterranean Monk Seal (Monachus monachus).

CyMARC also operates as a rescue centre for the treatment and rehabilitation of injured and sick marine turtles.

Iole is an adult female of large size (80cm long by 77.5cm wide). She was found by beach visitors in the Limassol area last year and their efforts gave her a second chance to life.

The turtle had air trapped in her lungs and could not swim properly or dive. She was transferred to the rescue centre where she was treated. Iole had weights placed on her carapace to help her swim straight and to allow the air to slowly be released so as to be able to regulate and maintain her balance and buoyancy.

“Iole’s release was met with success, and we wish her a healthy long life in the Mediterranean Sea,” the department of fisheries said.

In statements at the centre, Ambassador Garber said she was impressed with the work of the centre.

“It was great to see Iole released today! As we work together to mitigate and combat the effects of climate change, we must not lose sight of advancing sustainable fishing practices and sustainable fisheries. Fish and seafood are a key source of protein for 3.3 billion people and support the livelihoods of more than 10 per cent of the world’s population. The United States is proud to work with partner countries to build cooperative, science-based rules to keep fishing sustainable,” Garber said.

The minister and the department thanked both the Ambassador and the Commissioner for their active interest in the Marine Turtle Protection Programme and reiterated their commitment for the conservation not only of this emblematic species but all the marine habitats and biodiversity to ensure a healthy and productive marine ecosystem.