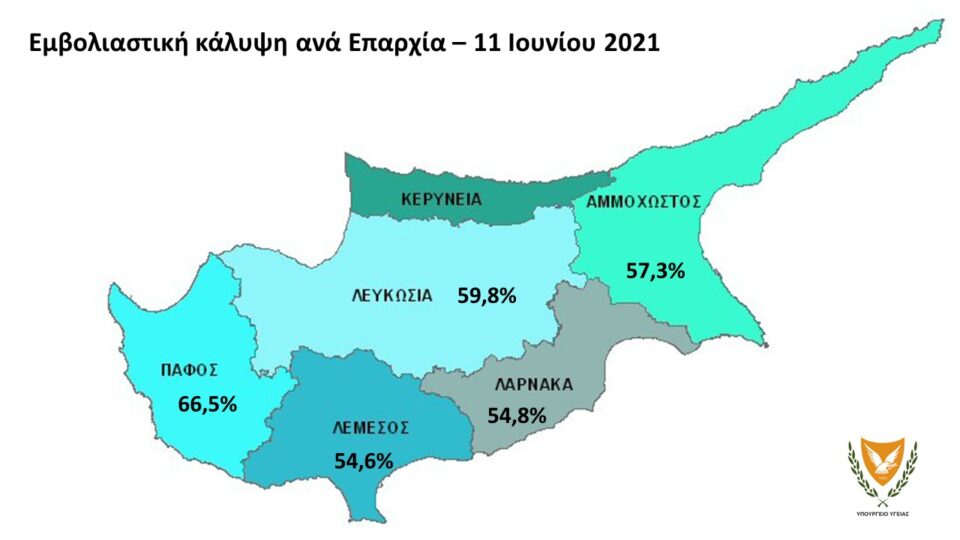 The vaccination portal will be open until Monday afternoon for people over 40, the health ministry said on Saturday, as the number of people who have received at least one vaccine reached 58 per cent.

According to the health ministry, 12,210 appointments were booked since Friday morning when the portal opened for people over 40, out of the 22,470 available.

People over 40 can book a vaccination slot until Monday 5.30pm.

On Tuesday, the portal will open for people between 18 and 39.

After that, it is expected that the portal will open for everyone over 18 to give the opportunity to people who have not had their vaccination for various reasons to book an appointment.

According to the health ministry, the group with the lowest vaccination percentage is that of 18 to 29, which is reflected in the daily case numbers as people recently found positive are mainly those under 30.

“It emerged through contact tracing that a very high percentage, close to 95 per cent, have not been vaccinated, which makes them more susceptible to the virus and its variants, thus increasing the risk of serious illness,” the ministry said.

It added that the highest percentage of people vaccinated with the first dose is those over 70, while the vaccination of the age groups 40 to 49, 50 to 59 and 60 to 69 is progressing “quite satisfactorily”. There has also been significant increase in the last week among the 30 to 39 group.

At 66.5 per cent, Paphos continues to rank first among districts on vaccination coverage with at least the first dose. Nicosia follows at 59.8 per cent, Famagusta at 57.3 per cent and the districts of Larnaca and Limassol at 54.8 per cent and 54.6 per cent respectively.

Until Friday, 58.8 per cent of the population had been vaccinated with the first dose and 39 per cent have completed their vaccination regimen, the health ministry said. The goal is to reach 65 per cent by the end of June.

It reiterated the importance of vaccination.

“As the British variant prevails in the community in Cyprus, the need to increase the vaccination coverage becomes imperative, with an emphasis on younger people who have more intense social activity and therefore increased exposure to the virus,” it said.

In view of the summer season when mobility and travel are expected to increase, it said, “efforts are focused on minimising the chances of transmission of the Indian variant to the community, in order to avoid the burden of epidemiological indicators and the deterioration of the epidemiological picture.”

The health ministry said that the benefits of vaccination against Covid-19 are multiple and this has been recorded in recent weeks in the epidemiological data of our country. “With the number of cases having stabilised in double digits and the positive rate being close to 0.2 per cent, the collective effort that is underway to build the wall of immunity shows its positive effects.”

The ministry also cited the European Center for Disease Control and Prevention (ECDC) and the European Commission that call on member states to expedite their vaccination programme, noting that vaccinations can provide protection against mutations in the virus. The ECDC, it said, is concerned about the emergence of the British and Indian variants, which have been shown to cause aggressive transmission of the virus in the absence of adequate vaccination shielding of the population.