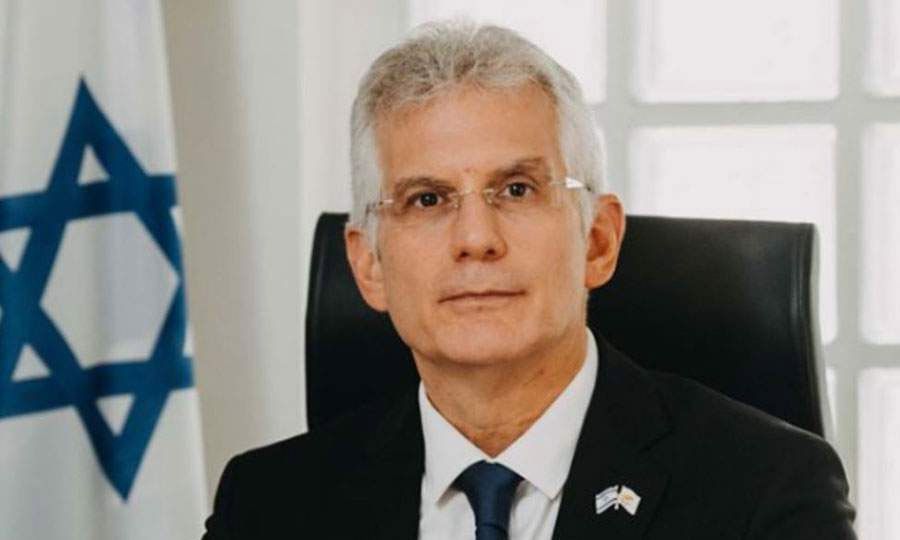 “Israelis’ cultural affinity with Cypriots is growing and developing, and this supports business collaboration just as much as deals and shared technology,” the Israeli Ambassador to Cyprus Shmuel Revel points out.

“Israeli investors feel very good about working with their colleagues and businesses in Cyrus. There is a definite feel-good factor and that is a very important thing,” he adds.

For the Ambassador, it’s noteworthy that here in Cyprus, Israel received important support from both the government and private business and citizens during the recent hostilities.

“There was clear condemnation of the rocket attacks on our country.  And we had a lot of friends and colleagues, from government, but also from the private sector, from civil society who called in or sent messages of solidarity.

The growing cultural affinity between Israel and Cyprus has nurtured the growth of business collaboration and investment as well. You know, it’s not just about making your profit, it’s also about working together to make positive changes. We are neighbours; we have an easy-going living and working relationship, and that’s very significant.

What encourages me is that I see that we have this real connection between our ministries of science and technology, between our scientists, among the young people who study in Israel and Israeli students who come to Cyprus to learn. We need to build on that, and this is our main challenge for the next few years.”

In building this collaboration, Israeli investors have been active in areas that make a difference in Cyprus, the Ambassador notes.

“You would be surprised to learn that a new and increasingly important area of Israeli investment in Cyprus is restauration. Yes, Israeli investors are putting significant money into restaurants, establishing new and innovative eateries. I believe this is very promising because it goes to our theme of cultural collaboration, food and entertainment.”

Then, many Israeli hospitality companies have invested in Cyprus.

“Fattal, which came here some years ago, made a significant investment in building and renovating hotels. Brown Hotels is also planning to do the same. We have also some smaller companies investing in hotels in Cyprus,” the Ambassador says.

Real Estate is another focus of Israeli investment.  The port/marina project in Larnaca to be undertaken by a consortium of Israeli & Cypriot interests, includes a port expansion with infrastructure for cruise ships and commercial uses and expansion of the marina with extensive land development. The one-billion-euro investment is considered the biggest ever made in Cyprus, as the Ambassador explains.

Another potential area for cooperation is the development of pharmaceuticals.

“Specifically, there were many projects for the treatment of the coronavirus in Israel. “We have in Israel some very successful treatments which are now in clinical trials. And it would be very logical to cooperate with Cyprus to develop these under very strict medical rules, and determine that they are safe for use. I think that we will see much more of this in the future.”

In terms of building collaboration, the so-called ‘Abraham accords’ have opened new markets for collaboration for Israel, and which have created opportunities for Israel is sharing with Cyprus

“It’s already happening. In April, this year, Cyprus hosted a forum in Paphos which brought together the foreign ministers of Israel, Cyprus, Greece, and the United Arab Emirates.”

But these accords are dramatic on the strategic level, the Ambassador continues.

“How do we translate this strategy to actual results? First of all, collaboration in shipping services, for which Cyprus is among the most important players in the world, should be possible with countries like the United Arab Emirates which is also very strong in shipping. Then we have areas like renewable energy which is critical for all three countries to develop. The UAE has made quite significant investments in solar energy, for example.

“We want to bring out these partners in the region which have signed normalisation agreements. It’s very important for young people from all these countries to get together. And hopefully, if we look to the future, this coexistence around common projects will make a change a significant change for peace.”

Partnership in education for technology is one of the most important areas of collaboration,” he continues.

“The future of Cyprus and Israel is in technology. So it is critical to get young minds educated and working and on the path to create innovation, from the startup stage to the pilot project stage to try out this technology and up to marketing it. I mentioned renewable energy, but we also want to collaborate in Cyber, water management, agritech, healthcare and tourism.

And of course, we identify that Cyprus has the characteristics to become an innovation eco-system, and there is solid encouragement for people on the ground.  We have very close ties with many incubators, accelerators, you know, whether it’s RISE (now known as CYENS), or Bank of Cyprus’ IDEA and also the Cyprus Universities.

We are also very proud that in the past three years, we have had about 130 Cypriots already in several rounds of courses on entrepreneurship and innovation in Israel, organized at the Carmel Institute in Haifa, with professors and businesspeople from all over our country. In 2021, it took place online because of the pandemic, with more than 90 participants. We got a lot of positive feedback from the young people who participated, who felt they had come out with the practical tools needed to turn their ideas into businesses.

We also got a lot of positive comments from those who visited Israel. They had a chance to ‘experience’ Israel, going out in the evening, trying new foods, etc. This cultural aspect again is really important for the partnership between Israel and Cyprus.”

We should also mention the Paphos-based Institute of innovation, which is a collaboration between Israel’s IDC and the Pafos Municipality.”

The health sector is one in which collaboration has become quite close, with some new medical centres, for example, soon to be moving in.

“Well, of course, in the health sector, we have traditional, deep relations between Israel and Cyprus. For many, many years. Israel is a country where you have very high-level hospitals like the Schneider Children’s Medical Centre, Sheba Hospital, the Hadassah Hospital in Jerusalem, or the Rambam Campus in Haifa for example. Cypriot private patients come to Israel for treatment from all around the world.

But what we have managed to do in recent years is to turn this contact into something much deeper.  During the pandemic, we established a hotline between Sheba, and the Nicosia emergency unit here at the Nicosia hospital, and also at the Famagusta hospital. At times, pharmaceuticals manufactured on the island were needed in Israel, and we managed to import them, which during the pandemic was not always easy. We also arranged emergency evacuations during the time of the pandemic.

So the synergy between Israeli doctors and Cypriot doctors is very good, very positive. And this close cultural affinity is, again, very important, because trust is a critical factor in the health sector. Because there is a high level of trust, you will see more investment once Cyprus emerges from the pandemic.”