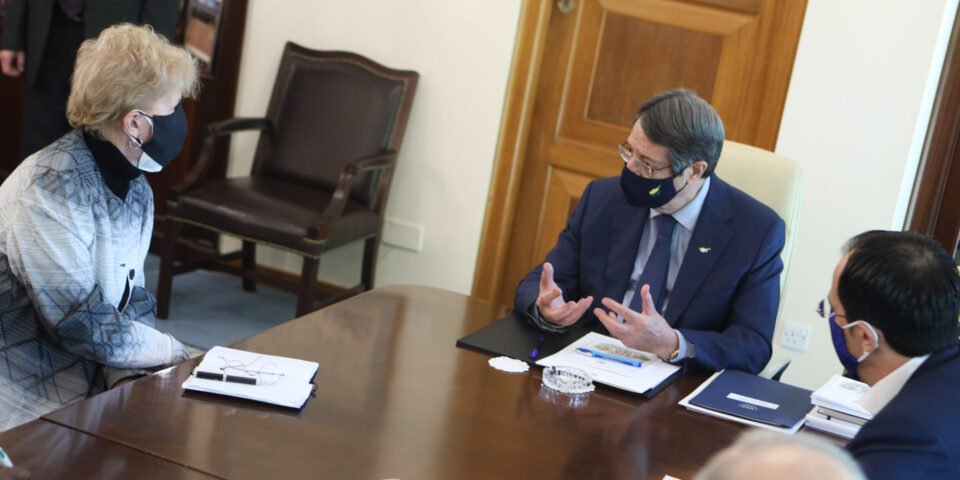 File photo of Lute meeting Anastasiades at the presidential palace

UNSG’s special envoy on Cyprus Jane Holl Lute will visit Cyprus on June 21 to hold contacts with the leaders of the two communities on the island, according a diplomatic source.

The UN is not very optimistic as regards the possibility of convening a new informal 5 + 1 meeting on Cyprus before September. Despite that, the meetings are considered to be useful in view of the UN Secretary-General’s good services report, which should be submitted to the UNSC before July 10.

On the same date, the report on the UN Peacekeeping Force in Cyprus (UNFICYP) should be submitted to the UNSC in view of the renewal of its mandate, which ends on July 31.

This will be the last renewal under the current Representative of the UNSG in Cyprus, Elizabeth Spehar, whose term ends.

Meanwhile, speaking to the foreign press at the UN on Monday, Farhan Haq Deputy Spokesman for the UN Secretary-General referred to the tete a tete between the UNSG and the British Prime Minister on the sidelines of the G7 meeting in the UK, during which they also discussed the Cyprus issue.

“On Saturday, the Secretary-General had a bilateral meeting with the host of the G7, Prime Minister Boris Johnson of the United Kingdom. The Secretary-General encouraged the leaders attending the G7 Summit to adopt bold commitments in the fight against climate change. They also discussed a host of other issues, including Myanmar, Cyprus, Yemen and Afghanistan, among others” he said.

Cyprus has been divided since 1974 when Turkey invaded and occupied its northern third. Repeated rounds of UN-led peace talks have so far failed to yield results.

A 5+1 Informal Meeting that took place in Geneva, on April 27-29, failed to find enough common ground to allow for the resumption of formal negotiations in relation to the settlement of the Cyprus problem.