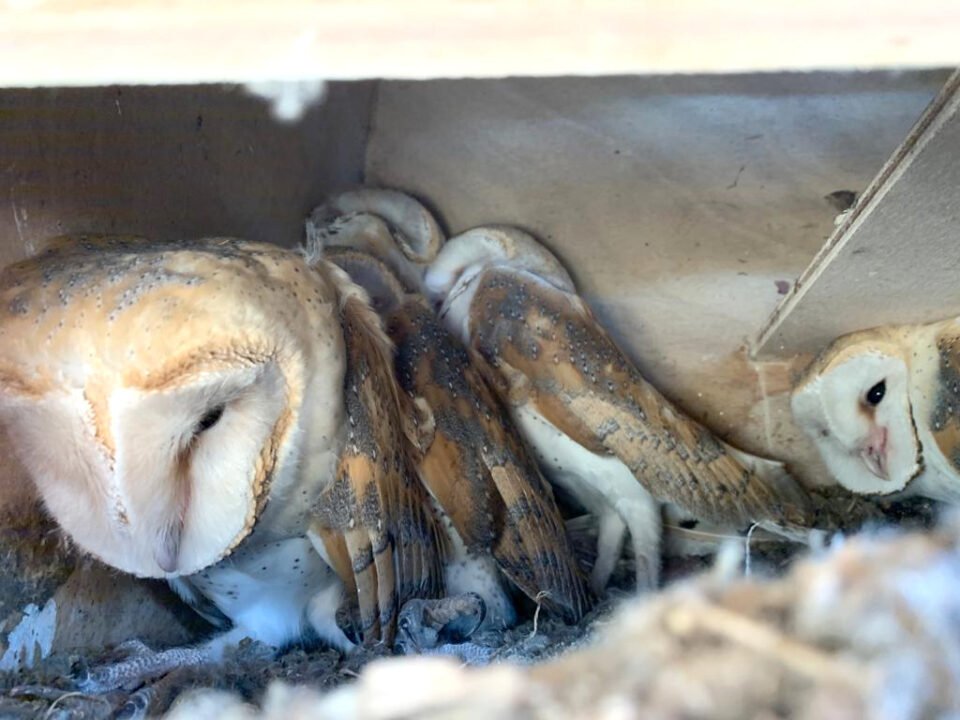 A barn owl family in a nest box: build the boxes and they will come. A pair of owls feeding their hungry young will consume hundreds of rats in a season (BirdLife Cyprus)

Using poison to control rat populations has a huge impact up the food chain. Providing nest boxes to help a natural rat-catcher is an ecological solution

Two social media posts – one good, one bad and ugly – were the spark for this column. Both posts were by hunting clubs in the Larnaca area, but that is only partly relevant. Both had to do with rat control, a hot topic for our hunting community and in our rural communities in general.

For many people, nothing seems to set the blood to ‘boil’ quite like a rat does. The widespread rodent – much like the mouse and fox, the crow and pigeon and all species of snake – falls into the ‘vermin’ category, a subjective and emotive label that leads to all manner of persecution. While the labelling is never warranted, the targeting might sometimes be, but not usually.

I will circle back to the ‘vermin’ discussion, but for now let us assume that some parts of our countryside do indeed sometimes have problems with rat over-population (this has a way of happening, after you persecute all the natural rat predators, such as foxes and snakes…).

If the social media posts are to be believed, the environs of the two villages our hunting clubs hail from are infested with rats. But the proffered solutions could not be more different. The first community – I am not naming them, because that is not the point – posted a picture of hunting club members proudly posing by a heap of bulging sacks. The sacks, we were informed, were full of poison bait for rats, freshly provided by the agriculture department. This poison was to be spread about the local countryside, as part of the hunting club’s ‘environmental mission’.

The rat poison used is based on warfarin, an anti-coagulant drug also prescribed for human use. In high doses, such as in the rat bait, warfarin causes severe internal bleeding and a slow death. Bad news for rats. Worse news for the ecosystem. The poison, mixed with grain and provided at a very low, subsidised cost by the government, used to be put out in the open. In a slight concession to ecology, it is now mostly placed in tubes or pots, with entrances big enough for rats but not wood pigeons or other birds that might be drawn to the deadly seeds. This helps, but not much. After eating the bait in the ‘bait station’, the rat does not drop dead immediately. Instead, it leaves the pot or tube and staggers around, becoming easy prey for natural predators such as foxes, Barn Owls and other raptors. These predators are then poisoned by the baited rat they eat (we know of a young Bonelli’s Eagle poisoned in this way a couple of years back, but most such victims are of course never found). The impact up the food chain and on the ecosystem as a whole is huge.

The second hunting club shared pictures of barn owl nest boxes being put up in trees around their village. The club catalogued the dozens of owl boxes put up over recent months, with the support of the game and fauna service. This is the ‘good’, the pole opposite to what the ‘beaming smiles by the stacks of rat bait’ club were sharing.

Providing nest boxes to help a highly effective natural rat-catcher is an ecological solution pioneered – to tremendous good effect – across the sea in Israel. Barn owls need a suitable cavity to nest in, and shortage of such holes often limits their numbers. Build them (the boxes) and the owls will come. In open habitats such as farmland, this natural approach can be tremendously effective. A pair of owls feeding their hungry young will consume hundreds of rats in a season.

Owl boxes are not something new for Cyprus, but the effort has taken off in recent years, thanks in large part to support from Agriculture Minister Costas Kadis, who is pushing for a relevant national action plan to be established, with natural rat population management in mind. BirdLife Cyprus is part of this NAP effort, with the support of SPNI, our BirdLife partner in Israel, and so are the game and fauna Service and the departments of forests and agriculture.

The catch in all this is that there is not much point putting up artificial nest boxes if poison bait is still being spread about. If it is, then the tempting new barn owl real estate will act to draw the birds to an area with deadly, poison-infused rats. As part of the NAP effort, BirdLife Cyprus is trying to convince the government to establish an agri-environment scheme that would reward farmers for putting up and maintaining owl boxes and for refraining from poison use. The compensation is a good idea because it takes a while for the owls to reduce rat numbers. In addition, though natural control is certainly more sustainable in the long-term, it does not always have the same short-term impact on rat numbers as poison does. This because natural predators don’t wipe out their prey, they tend instead to switch to other targets once one prey species becomes rare.

And this talk of natural balances brings me back to the ‘vermin’ issue.

With the notable exception of invasive alien species introduced by man (which rats and mice are on many small oceanic islands, for example), ecosystems simply cannot be said to be made up of ‘good’ creatures and ‘bad’ creatures. Foxes and rats – labelled ‘vermin’ by all-too-many hunters and farmers – are just as important in ecosystems as are more universally popular species such as Chukar partridges, Turtle doves and Hedgehogs. Imbalances do of course occur in natural systems, but understanding what lies behind such over-population issues is key. Remove the natural predators by persecuting them or over-simplify and degrade ecosystems (the intensive monocultures so characteristic of modern agriculture leap to mind here) and yes, some species will explode in numbers.

Once the bigger picture is seen, then sustainable solutions become more obvious. These deep solutions rest on restoring ecosystems. The big picture is about restoring biodiversity to systems such as farmland, something that has to become a real policy priority going forward. But in the meantime, and while we work on the big changes needed, providing targeted help for a natural predator such as the barn owl is no bad thing to do. Provided, that is, we can stem the flow of poison bait into our countryside. This is doable. In Israel, the barn owl programme has led to an 80 per cent decrease in rodenticide use since 2006.

Martin Hellicar is the director of local nature conservation NGO BirdLife Cyprus. A PhD ecologist and former journalist, he is fortunate enough to work for an organisation whose positions closely match his, though the opinions expressed here are entirely his own