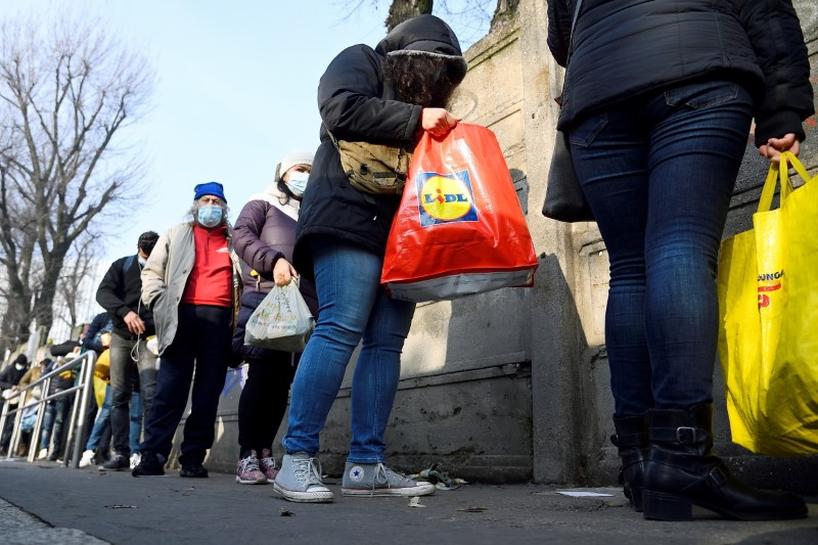 People queue for free food in Italy. Undeniably, a consequence of ultra-low interest rates is the resultant widening of wealth and intergenerational inequalities

In the aftermath of the global financial crisis central banks substantially lowered interest rates to support the recovery of their economies. In fact, the ECB by September 2015 had reduced its overnight deposit rate to a negative level of 0.5 per cent so as to contribute to bolster financial stability in Europe. And with the repercussions of Covid-19 depressing economies the hyper-accommodative monetary policies of the ECB manifested in central bank purchases of new bond issues at ultra-low interest rates have been maintained. However, it appears that with the easy monetary policies of the ECB producing adverse side effects it is probable that the sustained recovery of economies in the euro area could be hindered by the overall impact of such policies. Indeed, a prolonged period of very low interest rates is likely to increasingly produce unintended consequences or adverse side effects as reflected in excessively high debt, overvalued asset prices and underpriced risk, resource and credit misallocations, lower productivity and mounting wealth and inter-generational inequalities, all factors detrimental to sustaining healthy economic growth.

The ECB’s “quantitative easing” policy whereby the bank purchases large quantities of new government bonds from banks has enabled or even encouraged euro area countries to finance their burgeoning government expenditures and deficits with large issues of very low interest rate eurobonds. This has resulted in government debt surging to very high levels in a number of countries, in fact, reaching over 200 per cent of GDP in Greece, above 150 per cent in Italy, and over 120 per cent in Portugal, Spain and Cyprus by April 2021. Indeed, such “unconditional” government borrowing used mainly to finance mounting current expenditures instead of productive public investments and reforms has diminished the growth potential and jeopardised the financial stability of these European countries.

Regarding the private sector very low interest rates have induced investors to purchase riskier assets boosting prices of shares and property. These asset gains raise in turn concerns that if low and negative interest rates help the economy as intended including significantly boosting consumer price inflation, interest rates will move higher and puncture asset prices and possibly bring about a financial crisis. In addition, because bond prices have been rising and related  yields falling, a large portion of the huge purchases of government bonds have been bought for speculative reasons. This development could mean that any firm market expectation of an imminent significant rise in interest rates and consequently decline in bond prices could cause a massive sell-off of bonds and contribute further to financial instability.

What also should be of important concern for policymakers regarding the real economy is that overvalued asset prices and the underpricing of risk via low interest rates is continuing to lead to a gross misallocation of credit and resources that is diminishing the productivity of economies. With low interest rates failing to obliterate the difference in risk in investing in profitable and unprofitable activities it is funding for unproductive pursuits that has boomed and fuelled financial capitalism. Furthermore, the underpricing of risk and even its diminution with negative interest rates has produced a disconnect between funding and real wealth creation. In fact, ultra-low interest rates have encouraged a number of European companies to take on billions of euro in cheap debt to pay for share buybacks instead of undertaking productive investments.

Low and negative interest rates on assets such as bonds and bank deposits provide major problems for insurers, pension funds, and individuals that typically rely on these saving instruments for safety and positive returns. For existing and potential pensioners reasonable positive returns often provide income guarantees. Furthermore, with extremely low deposit rates the average citizen has no longer the safe interest-bearing assets to invest in. The younger generation in particular need to hold an asset which enables them to accumulate savings in order to finance house purchases, educate and take care of offspring, and even save for old age. However, it is noted that many younger persons are increasingly investing their meagre savings in crypto currencies, which is viewed generally as a risky asset.

Indeed, the wealthier home-owning older generation can beget more wealth by investing in property and shares and speculating in bonds, while the younger rent-paying generation is rendered little opportunity to accumulate wealth, especially in the form of a house to raise a family and add to healthy population growth. Undeniably, an unintended consequence of ultra-low interest rates is the resultant widening of wealth and intergenerational inequalities. This is particularly the situation in Mediterranean European countries such as Cyprus where the lack of productive investments and decent job opportunities for the young exacerbate inequalities.

With higher inflation now being experienced globally nominal interest rates should be raised in order to increase real rates and counter the adverse effects stemming from the prevailing ultra-low interest rate regime. And especially in the Mediterranean countries of the euro area there is a need for complementary fiscal action involving reducing heavy taxes on interest income (30 per cent rate in Cyprus) and moving away from financing government expenditures with large unconditional Eurobond issues at low interest rates and instead funding public investments and reforms with conditional grants and loans from the EU. Such conditional financing, particularly from the EU’s Recovery and Resilience facility, should lead to a better allocation of resources in these countries and in the process support their economic recovery, which unfortunately ECB policies reflected in ultra-low interest rates are finding it difficult to do.