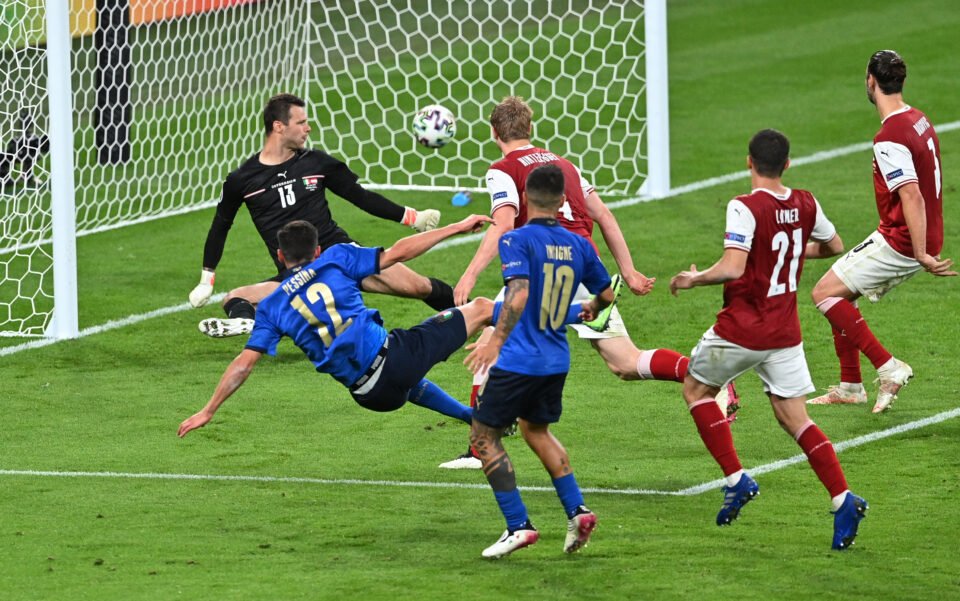 Italy survived a huge scare as they scrambled past outsiders Austria into the quarter-finals of Euro 2020 with substitutes Federico Chiesa and Matteo Pessina scoring extra-time goals to earn them a 2-1 win at Wembley on Saturday.

The Azzurri were the standout team during a perfect group phase but Roberto Mancini’s side misfired badly as they left their Roman fortress for the first time in the tournament and looked in danger of a shock exit.

In the end the old adage that good teams find a way even when below their best was apt as Italy extended their unbeaten run to a national record of 31 games, setting up a quarter-final clash against Belgium or Portugal.

Austria, playing in the knockout phase at the Euros for the first time, rocked the Italians in the second half and Marco Arnautovic headed past Gianluigi Donnarumma but his joy was cut short when a VAR check for offside saved Italy.

Mancini reacted by sending on four attacking substitutes late in the second half and Italy‘s depth proved decisive in the end as Juventus winger Chiesa and Atalanta midfielder Pessina got them out of jail with quality finishes.

Chiesa drove an angled shot past Daniel Bachmann in the 95th minute after showing great control to bring down a pass by Leonardo Spinazzola. Pessina, who also scored against Wales, gave Italy breathing space 10 minutes later with a clinical left-foot strike.

But a courageous Austria were not done.

Substitute Sasa Kalajdzic scored with a stooping header with six minutes left and Italy‘s nerves were well and truly frazzled by the time the final whistle sounded.

Mancini has used all but one of his 26-man squad in guiding Italy to the quarter-finals — the stage they reached in 2016 only to lose to Germany on penalties.

Having players like Chiesa and Pessina in reserve when Plan A is not working will fuel belief that Italy, despite Saturday’s stutter, can claim the title for the first time since 1968.

“We knew we had to suffer because Austria are the typical side who do not allow you to play well,” Mancini said.

“The substitutes made the difference for us, but everybody gave their best tonight. I’m happy because the lads gave everything to win even when we were tired.”

The Azzurri had swaggered their way through their group games in Rome, scoring seven unanswered goals, and Mancini’s side began in slick fashion on a perfect night for football.

With powerhouse wing back Spinazzola marauding at will down the left flank, Austria manager Franco Foda’s pre-match assertion that his side had a 10% chance of stopping the Azzurri machine looked about right.

Spinazzola lashed one shot wide before cutting a dangerous ball back for Nicolo Barella whose sweet strike was saved by the outstretched foot of Bachmann.

Ciro Immobile, back after being rested along with the rest of Mancini’s first-choice attack for the final group game against Wales, then sent a dipping right-foot effort thudding against the post from 25 metres.

But it was not all one-way traffic as Austria exploited space in behind Italy‘s defence and on one such occasion Arnautovic blazed a shot over the crossbar.

Foda would have been the more satisfied manager at halftime and, as his side’s confidence grew after the break, Italy‘s strangely oozed away as their fans went quiet.

Austria skipper David Alaba curled a free kick just over the bar and it all began to get a little fraught for Italy when Xaver Schlager and Arnautovic both went close.

Arnautovic then thought he had broken the deadlock with a close-range header from a tight angle in the 65th minute but a VAR check ruled he had been fractionally offside.

Mancini looked stone-faced in the technical area and acted immediately, hauling off the disappointing Marco Verratti and Barella, replacing them with Manuel Locatelli and Pessina.

Next he threw on Chiesa and Andrea Belotti as extra time loomed. The changes eventually paid off to crack the Austrian resistance and get the job done, but only just.

“It’s hard for me to find the words,” Arnautovic said. “If luck goes our way, we win the game in 90 minutes.”