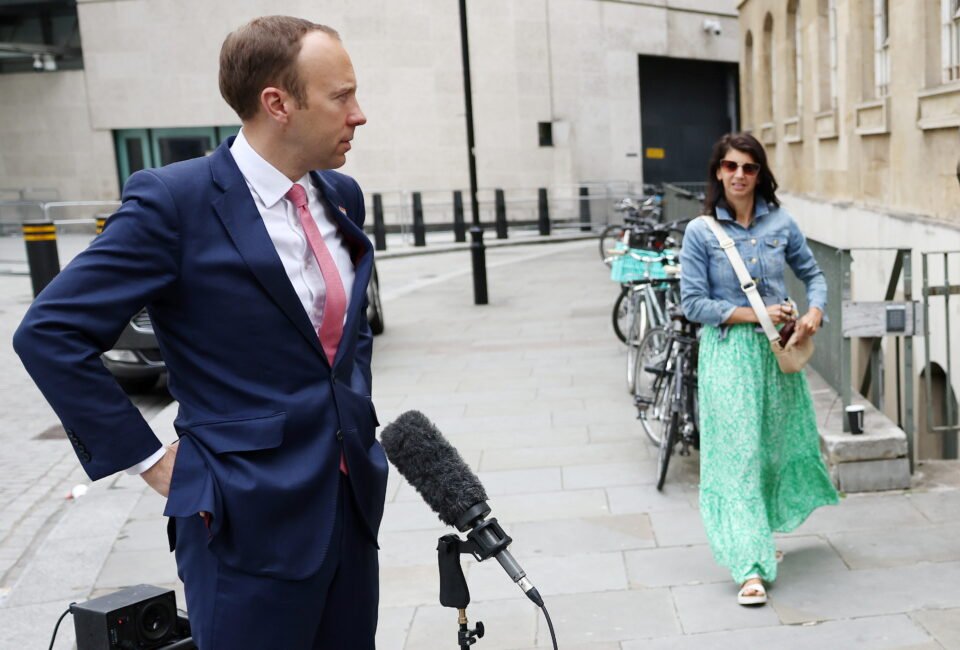 Britain’s government will investigate how footage of former minister Matt Hancock kissing and embracing his aide found its way into the media and forced his resignation, in the latest scandal to hit Prime Minister Boris Johnson’s government.

After first facing down calls for Hancock to be sacked or resign as health minister after pictures were published of him embracing a woman he had appointed to a taxpayer-funded role, Johnson accepted his decision to step down on Saturday.

Johnson’s government has overseen one of the highest official death tolls from the pandemic and has been criticised for its early handling – led by Hancock – of the coronavirus pandemic which was characterised by missteps.

A report by the BBC on Sunday that sensitive documents from the Ministry of Defence were found by a member of the public at a bus stop did little to dispel a feeling of chaos in government.

Asked whether the health ministry was investigating how the pictures of Hancock had been taken in his government office and leaked, Northern Ireland minister Brandon Lewis told Sky News: “It is a matter I know the department of health will be looking into to understand exactly how that recording … got out of the system.”

Since the pictures were published on Friday, an increasing number of his fellow Conservative lawmakers had privately called for Hancock to go, saying his position was untenable after he admitted to breaking coronavirus restrictions.

Johnson, who has faced down criticism of various scandals including the funding of refurbishment of his apartment in Downing Street, stood by his health minister initially. He accepted Hancock’s resignation on Saturday but suggested he might return to a higher public role.

He then swiftly appointed former finance minister Sajid Javid to the role.

“It’s ultimately why he’s taken the decision that his position was untenable and distracting from the wider work we all have to do … to move out of the pandemic.”