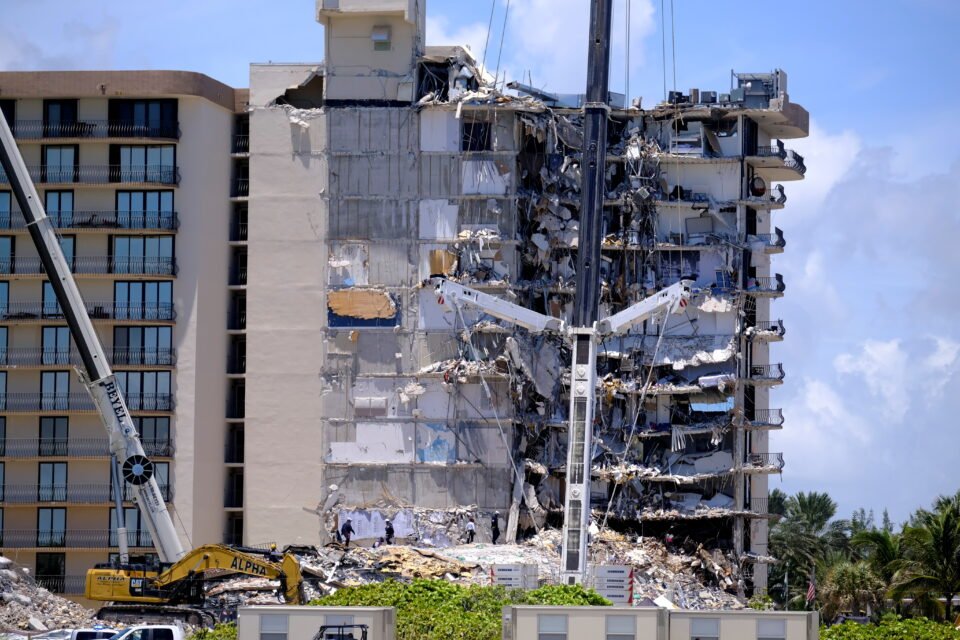 Search-and-rescue teams pulled two more bodies from the concrete and steel rubble of a partially collapsed Florida condominium tower on Monday, bringing the death toll to 11 with 150 people still listed as missing four days after the disaster.

Pouring rain and slabs of cement hampered round-the-clock efforts to pick through debris left from the unexplained cave-in of nearly half of the 12-floor, 156-unit building, in what may end up as the deadliest unintentional structural failure in U.S. history.

No survivors have been pulled from the ocean-front ruins of the Champlain Towers South condo in the town of Surfside, near Miami, since the first hours after the building abruptly crumbled into a heap early on Thursday as residents slept.

“They are coping with the news that they might not have loved ones come out alive and still hoping that they will,” the mayor said. “Their loved ones may come out as body parts.”

Rescue crews, including experts sent by Israel and Mexico, were using cranes, dogs and infrared scanners to identify signs of life in the ruins, although hope was diminishing as time wore on.

What caused the 40-year-old high-rise to give way remained under investigation, but initial attention focused on structural deficiencies identified in a 2008 engineer’s report released by Surfside city officials.

The condo association president warned residents in an April 2021 letter that visible concrete deterioration in the parking garage beneath the building had “gotten significantly worse over the years,” along with roof damage, and urged them to pay some $15 million in assessments needed make repairs, The Wall Street Journal and USA Today each reported on Monday.

As darkness fell over the site on Monday, more than 100 people gathered somberly, some holding candles, a short distance from where one crane stood illuminated against the night sky. A woman led the group in a meditation, and someone sounded a gong. Behind them, in enormous letters, the word “HOPE” had been inscribed in the sand.

Some relatives of the missing have provided DNA samples to officials for use in positively identifying remains. Family members were permitted to visit the site on Sunday.

“Not to say that we have seen anyone down there, but we’ve not gotten to the very bottom,” he said.

Jadallah said searchers have heard some sounds, such as tapping or scratching, that could possibly be made by a survivor, though he acknowledged they could also be caused by shifting metal.

The 2018 engineer’s report found severe concrete erosion in the underground parking garage and major damage in a slab beneath the pool deck. The report’s author, Frank Morabito, wrote that the deterioration would “expand exponentially” if not repaired.

Ross Prieto, then Surfside’s top building official, met residents the following month after reviewing the report and assured them the building was “in very good shape,” according to minutes of the meeting released on Monday.

After the meeting, Prieto emailed the town’s manager to say it “went very well … All main concerns over their forty year recertification process were addressed.”

Reuters was unable to reach Prieto, who is no longer employed by Surfside. He told the Miami Herald newspaper he did not remember getting the report.

The engineer’s report was commissioned as the condo, which was built in 1981, sought recertification, which is required for buildings 40 years old. An estimate prepared by Morabito Consultants in 2018 put the cost of repairs at $9.1 million.

Guillermo Olmedillo, Surfside’s town manager in 2018, told Reuters he did not recall hearing about structural issues.

“The last thing I knew was that everything is OK, reported by the building official,” Olmedillo said.

Gregg Schlesinger, a lawyer and former general contractor who specializes in construction-failure cases, said it was clear the deficiencies identified in the 2018 report were the main cause of the disaster.

But Donna DiMaggio Berger, a lawyer who works with the condo association, said the issues were typical for older buildings in the area and did not alarm board members, all of whom lived in the tower with their families.

Morabito Consultants said on Saturday that roof repairs were under way at the time of the collapse, but concrete restoration had not started.

“We are deeply troubled by this building collapse and are working closely with the investigating authorities to understand why the structure failed,” the firm said.

Given the scores of those still missing, the disaster may wind up ranking as the greatest loss of life from an accidental U.S. building collapse.

Two interior walkways collapsed into the lobby of the Hyatt Regency hotel in Kansas City, Missouri, during a party in July 1981, killing 114. And 98 people perished when the roof of the Knickerbocker Theatre in Washington, D.C., gave way from the weight of snow during a movie screening in January 1922.

Abu Dhabi will only allow vaccinated people in many public spaces