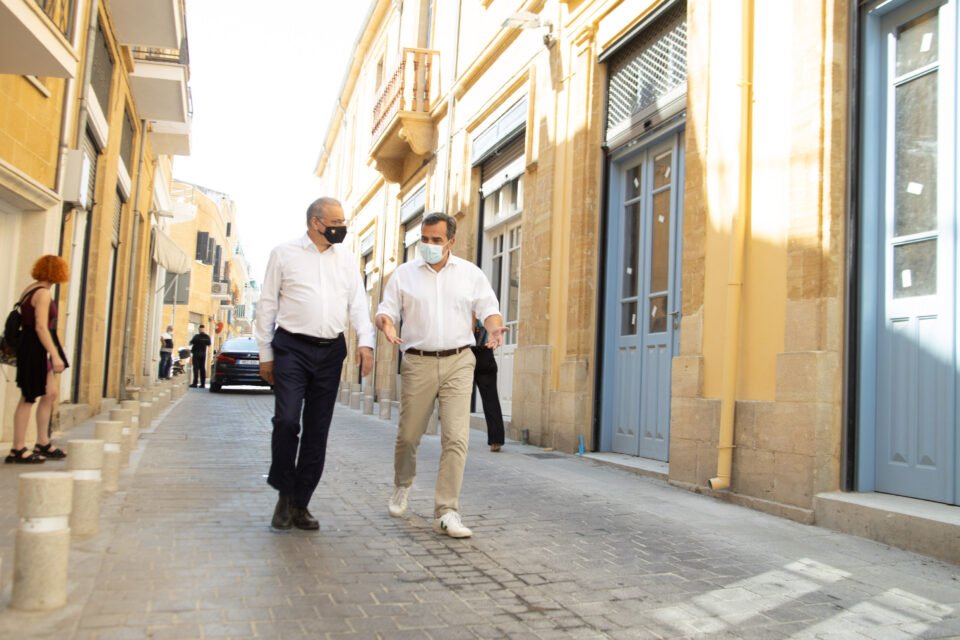 Old Nicosia is coming back to life, Nouris said, adding that the city within the walls is leaving behind the abandoned alleyways, rusty shop signs and derelict buildings that defined it in the past, especially areas closer to the Green Line.

The project was part of the Competitiveness and Sustainable Development scheme which ran from 2014 to 2020, and was co-financed by the European Regional Development Fund, the Republic of Cyprus and the municipality of Nicosia.

He added that the goal was to restore this specific area and create a district that will combine commercial and creative workshops, with a focus on creative businesses. Together with other projects nearby, like the old municipal market and Phaneromeni school, it will help change the face of the area.

The first phase, which was handed over on Tuesday, cost around €1.3 million and involved the redesign of roads and pavements and the rejuvenation of Nicosia’s historic centre.

In addition, 15 building facades have been restored, with the second phase of the project intending to restore 53 more, 16 of which belong to listed buildings.

“I am very happy to announce that things are looking optimistic, with many building owners starting to renovate the inside of their properties as well,” Yiorkadjis said.

“This means that all of these buildings, with their unique architecture and character, can be gradually used to rejuvenate the area”.

This project is not a one-off, Nouris added, but part of a range of EU and government funded projects such as the rejuvenation scheme for areas along the Green Line, which started in 2017 and ends this year.

With 271 applications already submitted within Nicosia and Ayios Dhometios , Nouris said that “We were pleased to see these schemes embraced by the youth,” who are giving previously abandoned areas a new lease on life.

Promoting entrepreneurship, innovation and culture in the old city has been and is still one of the municipality’s greater goals, with a focus on investments that give permanent uses to the area, such as the CYENS Centre of Excellence which now operates at the STOA building next to the under-renovation old municipal market, Yiorkadjis said.

“We believe that this will attract similar activity to the area’s empty or underused buildings, and aim to build closer bonds between scientists, business owners and local authorities to cultivate a culture of innovation and creativity through knowledge exchange”.

The much talked about transfer of the University of Cyprus Architecture School to the Phaneromeni school building is “proof of our commitment to our vision and goals for the city and will be complemented by the allocation of €15 million from the Recovery Fund for the creation of student dormitories and other relevant buildings,” Nouris said.

“We want to permanently move away from the dereliction and withering aura that defined this part of town and trigger a process of revitalisation, restore economic activity, attract even more visitors and residents, and encourage better use of public building and activity among the young”.

Lastly he said that in the coming days the government will be announcing generous housing and financial schemes for properties within the walls of Nicosia.