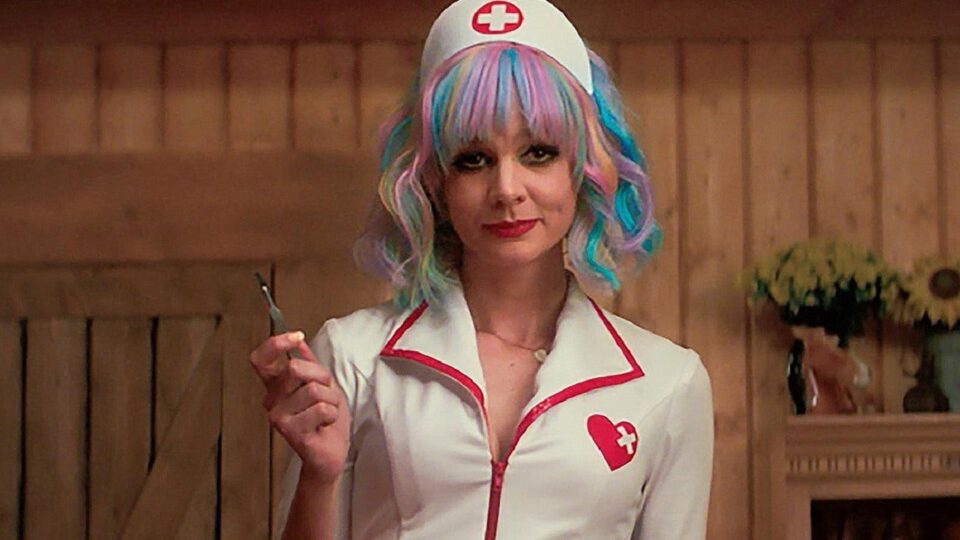 Cyprus is a bit late in getting this movie into its theatres, but I suspect those who go and see it will find it worth waiting for. Of all the Oscar nominees from this year’s awards season, Promising Young Woman is the easiest to recommend. It’s really entertaining, has a lot of spunk, and doesn’t care one bit that it’s basically painting the entire male college experience with one broad bloody brush. Oh and, perhaps most importantly for our times, it’s not super depressing! Just a little bit. Anchored by an excellent central performance and building up to a genuinely twisted plot-twist people won’t soon forget, Promising Young Woman is a thrilling ride despite the plot holes along the way.

The woman in the film’s title is Cassandra (Carey Mulligan), deeply troubled by a high school event that is very much part of the mystery and narrative, so I won’t spoil it for you. Suffice it to say, she’s bitter, enraged and volatile, and she’s taking it out on the world. Especially the guys. We first meet her as she lures one of her ‘victims’ (Adam Brody) from a nightclub and into his house to teach him a lesson. Again, I’m being purposefully vague here with the details because the movie functions on the element of surprise from the very first scene.

Cassie is set to coast through her early 30s with this huge chip on her shoulder, unable to emotionally reconnect with her parents (Clancy Brown and Jennifer Coolidge) and having a love-hate relationship with her barista job. Everything changes the day Ryan (Bo Burnham) walks into her diner, and charms her by drinking a coffee she spat in. Not only has she finally met her match in wit, but Ryan is an old high school classmate – and it’s because of him that she finds out about Alexander Monroe’s (Chris Lowell) wedding. One she fully intends to crash, because all her angst and thirst for revenge started with him.

Nothing’s stopping you from going online to find out more about the plot of Promising Young Woman, but you’d be doing yourself a big favour if you walked into this film with as little information about the plot as possible. Before I get into the film’s flaws, I’ll get the good stuff out of the way.

Carey Mulligan is perfect. She bites into this role like a savage and squeezes just about every drop out of her acting skillset. She’s psycho, she’s funny, she’s serious, she’s sympathetic, she’s antipathetic, she’s dangerous, she’s innocent… she nails every bit of Cassandra’s complex personality on the head. In fact, if this film deserved to win any Oscar of the five it was nominated for, it was Best Actress. Next up, Bo Burnham – the guy you should now know from his recently released, brilliant Netflix comedy special Inside – goes toe-to-toe with Mulligan as the seemingly perfect boyfriend; their banter is a joy to watch.

The directorial style is something of a pastiche – a patchwork of Quentin Tarantino and Sofia Coppola – which is more easily forgiven when it’s a directorial debut and, in this case, isn’t a bad thing at all. Emerald Fennell has officially burst onto the scene as a writer-director and made history by being the first woman to be nominated for both Screenplay and Directing for her first film. That she won for Screenplay is something of an irony, since that’s exactly where the movie fails the hardest.

Once you start thinking about Promising Young Woman a bit more deeply, the plot holes start to become more and more apparent, and the film’s lackadaisical attitude with its feminist bias sticks out to the point of looking lazy. That’s when you remember that greater directors like a Tarantino would never allow themselves to lose control of their story in the way that Fennell loses control of hers.

That said, I’m still feeling generous enough to give this movie three stars (in a grumpier mood, it’d be an easy two). The performances are really wonderful, the story – as patchy as it is – still holds enough emotional weight so that the shocking finale hits all the right spots, but above all else, it’s really entertaining. And these days, pure entertainment, even when it’s anchored by a really dark and tragic event, is priceless. Especially when the ultimate payoff is so bloody satisfying.

How a blind rescue dachshund lights up his human home

Summer cinema at Constantia is back