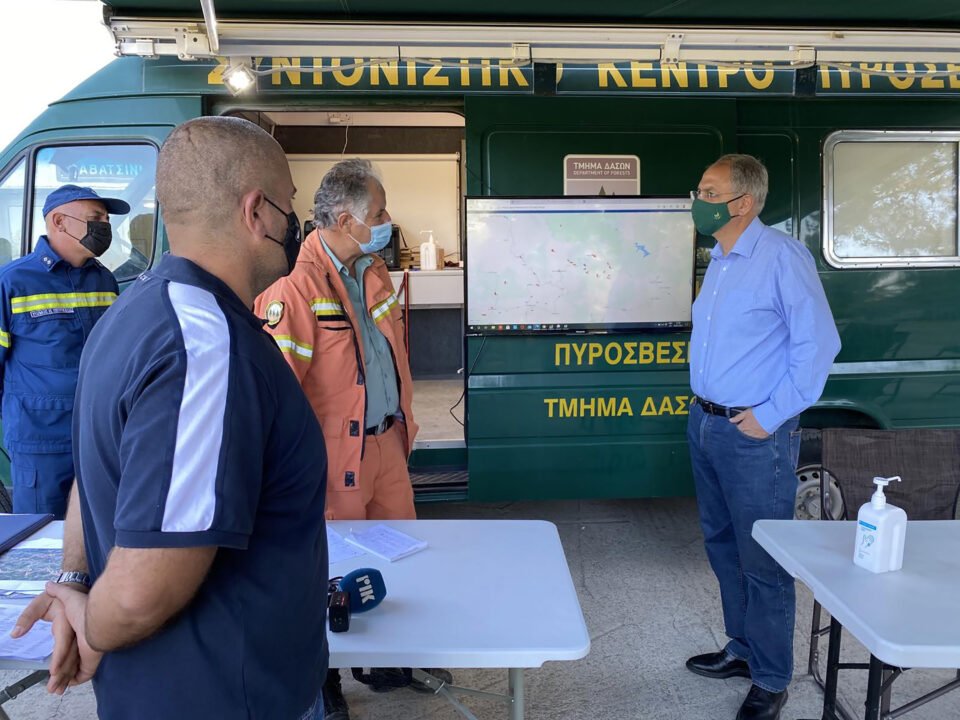 Farmers who were affected by the weekend’s fires will soon be able to apply for compensation for their losses, the agriculture ministry said on Tuesday.

The ministry announcement backed up Agriculture Minister Costas Kadis’ statements earlier in the day that the government would stand by them.

From Wednesday until July 27, owners and tenants of affected properties will be able to make a claim for damages, either on the ministry’s website or by visiting the Pitsilia and Larnaca district agriculture offices, or their local community councils.

Earlier in the day, Kadis visited the affected areas in the mountainous areas of Larnaca, saying it was a “heartbreaking picture”.

The fire left behind it a charred landscape spanning around 55 square kilometres, which included houses, businesses, pine forest, crops, and left 10 communities reeling. It was, the government said, the worst fire in living memory.

“We are here to see for ourselves the damages our farmers have suffered, and to send them the message that the government is by their side,” Kadis said.

Kadis said that agriculture ministry officials are already recording damages in order to formulate a proposal that will be presented to Cabinet on Wednesday to figure out how to help reimburse farmers as soon as possible.

“This will happen quickly, so that there are no gaps or inaction, and I believe with the state’s support our farmers will be able to stand on their own two feet.”

During a meeting with community leaders, he said that the ministry will be proposing three actions, starting with a one-off grant that will be arranged “without much bureaucracy” for immediate relief.

The second proposal is the damages compensation scheme mentioned above, and the third infrastructural repairs to help reinstate irrigation systems.

Odou community leader Menelaos Philippou told the Cyprus News Agency that damages are still being recorded in the aftermath of the fire with the help of volunteers.

Farmers in the region, which is known for its tomatoes and honey, suffered devastating losses, with whole tomato plantations gone, hundreds of beehives ruined and 26 tonnes of honey burnt.

“We are expecting immediate help and support to recover from this disaster, set up our estates again and continue with our lives,” Philippou said. “We never expected that such thing would ever happen to us.”

Melini community leader Christoforos Alecou described the destruction as “biblical,” especially because it spread so fast.

“I am dismayed by the destruction farmers in the community are facing. Fruit and vegetable crops were destroyed, as well as irrigation systems and equipment worth thousands of euros. People need immediate support. They have nothing to turn to now,” he said.

A delegation of the Cyprus Agricultural Payments Organisation chaired by Andreas Evangelou said the organisation will stand by the farmers and expressed hopes they will receive their compensation in due course.

What the agriculture ministry wants is for farmers to be active and sustainable from an early age, he said. “We will support our youth, so they can successfully continue to do what they started”.

Kadis pointed out the importance of agriculture in stopping fires, “another reason we want farmers to continue to operate”.

Farmland used to act as a fire break, but its abandonment in recent years meant that the area that burned down had filled with large solid sections of vegetation that acted as fuel.

“It is obvious that the blaze was contained in spots of human activity, where there were crops and water,” he said.

How to thoroughly enjoy your car rental abroad