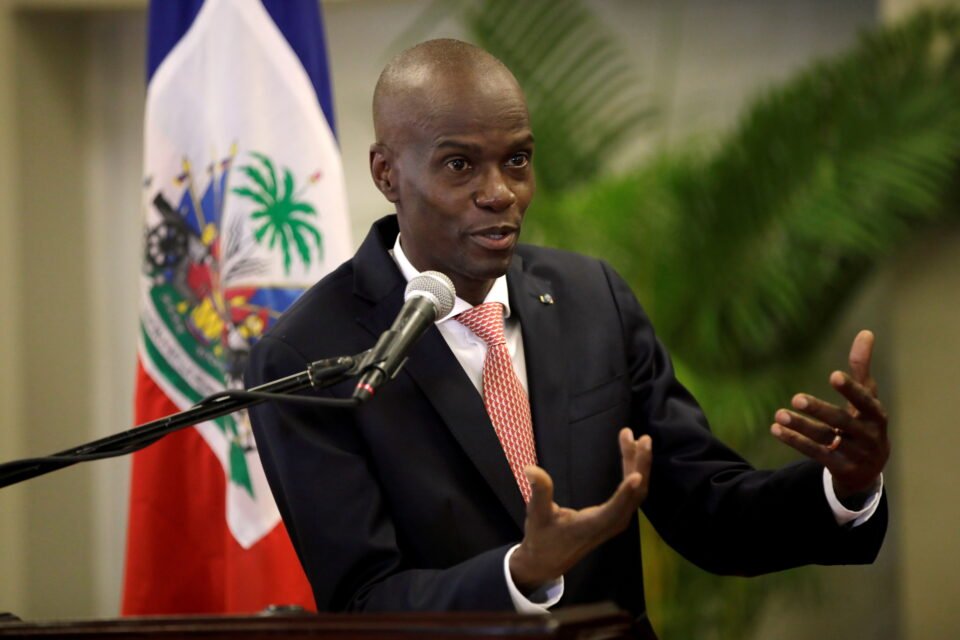 Haiti‘s security forces were locked in a fierce gun battle on Wednesday with assailants who assassinated President Jovenel Moise at his home overnight, plunging the already impoverished, violence-wracked nation deeper into chaos.

The police had killed four of the “mercenaries” and captured two more, Police General Director Leon Charles said in televised comments late on Wednesday, adding that security forces would not rest until they had all been dealt with.

“We blocked them en route as they left the scene of the crime,” he said. “Since then, we have been battling with them.”

“They will be killed or apprehended.”

Moise, a 53-year-old former businessman who took office in 2017, was shot dead and his wife, Martine Moise, was seriously wounded when heavily armed assassins stormed the couple’s home in the hills above Port-au-Prince at around 1 a.m. local time (0500 GMT).

Haiti‘s ambassador to the United States, Bocchit Edmond, told Reuters in an interview the gunmen were masquerading as U.S. Drug Enforcement Administration (DEA) agents as they entered Moise’s guarded residence under cover of nightfall – a move that would likely have helped them gain entry.

The brazen assassination, which drew condemnation from Washington and neighboring Latin American countries, came amid political unrest, a surge in gang violence, and a growing humanitarian crisis  in the poorest nation in the Americas.

The government declared a two-week state of emergency to help it hunt down the assassins, whom Edmond described as a group of “foreign mercenaries” and well-trained killers.

The gunmen spoke English and Spanish, said interim Prime Minister Claude Joseph, who assumed the leadership of the country, where the majority speak French or Haitian Creole.

“I am calling for calm. Everything is under control,” Joseph said on television alongside Police General Director Charles. “This barbaric act will not remain unpunished”.

The first lady had been airlifted to Florida for treatment where she was in a stable condition, Joseph said.

Haiti, a country of about 11 million people, has struggled to achieve stability since the fall of the Duvalier dynastic dictatorship in 1986, and has grappled with a series of coups and foreign interventions.

U.S. President Joe Biden denounced the killing as “heinous” and called the situation in Haiti – which lies some 700 miles (1,125 km) off the Florida coast – worrisome.

“We stand ready to assist as we continue to work for a safe and secure Haiti,” he said.

Many people in Haiti had wanted Moise to leave office. Ever since he took over in 2017, he faced calls to resign and mass protests – first over corruption allegations and his management of the economy, then over his increasing grip on power.

Lately, he presided over a worsening state of gang violence that rights activists say is linked to politics and business leaders using armed groups for their own ends.

In recent months, many districts of the capital Port-au-Prince had become no-go zones and one of Haiti‘s most powerful gang leaders warned he was launching a revolution against the country’s business and political elites https://www.reuters.com/world/americas/haiti-gang-leader-launches-revolution-violence-escalates-2021-06-24 – although rights activists said he was more linked to Moise than the opposition.

Moise himself had talked of dark forces at play behind the unrest: fellow politicians and corrupt oligarchs unhappy with his attempts to clean up government contracts and to reform Haitian politics. He provided no proof of this.

The streets of the usually bustling capital were mostly deserted on Wednesday and the airport was closed although gunshots rang through the air.

A caravan of vehicles including the ambulance carrying Moise’s corpse to the morgue had to change route because of gunfire and roadblocks, according to local reports.

With Haiti politically polarized and facing growing hunger, fears of a breakdown in order are spreading.

The Dominican Republic closed the border it shares with Haiti on the island of Hispaniola, except to returning nationals, and beefed up security.

“This crime is an attack against the democratic order of Haiti and the region,” Dominican Republic President Luis Abinader said.

The U.N. Security Council expressed deep shock and sympathy over Moise’s death ahead of a closed-door meeting on Thursday, requested by the United States and Mexico, to evaluate the situation.

A U.N. peacekeeping mission – meant to restore order after a rebellion toppled then-President Jean-Bertrand Aristide in 2004 – ended in 2019 with the country still in disarray https://www.reuters.com/article/us-haiti-politics-idUSKBN1WU2SP. In recent years, Haiti has been buffeted by a series of natural disasters and still bears the scars of a major earthquake in 2010.

Moise’s murder comes amid a power vacuum. The banana exporter-turned-politician, who took office in 2017, had ruled by decree for more than a year after the country failed to hold legislative elections. There are only 10 elected officials in the Haitian government, all of them senators.

Just this week he nominated a prime minister to replace Joseph – who was only meant to be an interim PM – but the official has yet to be sworn in. The head of the Supreme Court of Justice died last month of COVID-19 amid a worrying surge in infections and has yet to be replaced.

An extraordinary issue of the official gazette on Wednesday said the prime minister and his cabinet – meaning Joseph’s government – would assume executive powers until a new president could be elected, as per Haiti‘s constitution.

An election had already been scheduled for September, alongside a controversial referendum on a new constitution that Moise had said would help finally bring political stability to the country.

Opposition leaders said it was part of his attempts to install a dictatorship by overstaying his mandate and becoming more authoritarian. He denied those accusations.

The U.S. Embassy said it would be closed on Wednesday due to the “ongoing security situation.”

The United States, which is Haiti‘s top aid donor and has long exerted an outsized weight in its politics, had on June 30 condemned what it described as a systematic violation of human rights, fundamental freedoms and attacks on the press in the country. The Biden administration urged https://www.reuters.com/world/americas/us-condemns-wave-violence-haiti-says-human-rights-violated-2021-06-30 the Haitian government to counter a proliferation of gangs and violence.

The Pan American Health Organization (PAHO) expressed concern on Wednesday that the violence could deal a setback to efforts to fight COVID-19 in Haiti – one of only a handful of countries worldwide that has yet to administer a single shot of coronavirus vaccine.

US, under pressure, slowly seeks to lift Covid travel restrictions