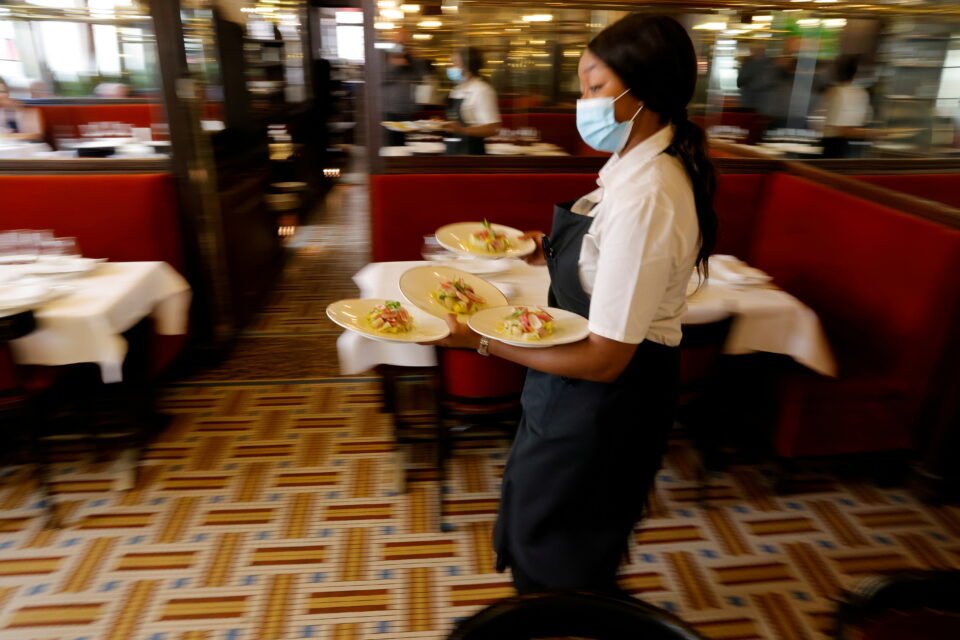 Macron said on Monday that a health pass required to attend large-scale events would now be used much more widely, including to enter restaurants REUTERS/Pascal Rossignol/File Photo

Hundreds of thousands of people in France rushed to set up appointments to get vaccinated against the coronavirus after the president warned that the unvaccinated would face restrictions aimed at curbing the quick spread of the Delta variant.

Unveiling sweeping measures to combat a surge in infections, President Emmanuel Macron said on Monday night that vaccination would not be compulsory for the public for now but stressed that restrictions would focus on those who are not vaccinated.

The president said health workers had to get vaccinated by Sept. 15 or face unspecified consequences, a proclamation that outraged some employees.

Stanislas Niox-Chateau, who heads Doctolib, one of the country’s biggest online websites used to book vaccine appointments, told RMC radio there were record numbers seeking vaccines after the president’s announcement.

In nearly 24 hours, some 1.7 million vaccine appointments had been booked through Doctolib, the website said.

“Today you are 792,339 to have received a first jab, a new record. This drive must amplify and continue in coming weeks,” Prime Minister Jean Castex said on Twitter.

For most of June and July, the country averaged roughly 570,000 shots a day, according to Our World in Data.

France has given nearly 53% of its population at least one dose of the vaccine and 37% are fully vaccinated. (Graphic on global vaccinations) https://tmsnrt.rs/3tUM8ta

Macron said on Monday that a health pass required to attend large-scale events would now be used much more widely, including to enter restaurants, cinemas and theatres.

It will also be required to board long-distance trains and planes from the beginning of August, giving a further incentive for people to get the shot as the summer holiday season kicks in.

French retailers were puzzled over how the government expected them to block people not vaccinated against COVID-19 from shopping malls and other public places.

A slowdown in vaccination rates and a sharp upturn in new infections due to the highly contagious, now dominant, Delta variant, have forced several countries to rethink their strategies https://tmsnrt.rs/2TbE5vy.

In France, new infections peaked at more than 42,000 per day in mid-April before falling to 2,000 per day in late June. Now the country is recording on average 4,000 new cases a day, with the rate of new infections doubling every five days. (Graphic on cases) https://graphics.reuters.com/world-coronavirus-tracker-and-maps/countries-and-territories/france

Finance Minister Bruno Le Maire warned on Franceinfo radio that the only obstacle to France achieving 6% economic growth in 2021 would be an uptick in COVID-19 due to the Delta variant.

Beyond school: a day in the life of a software engineer