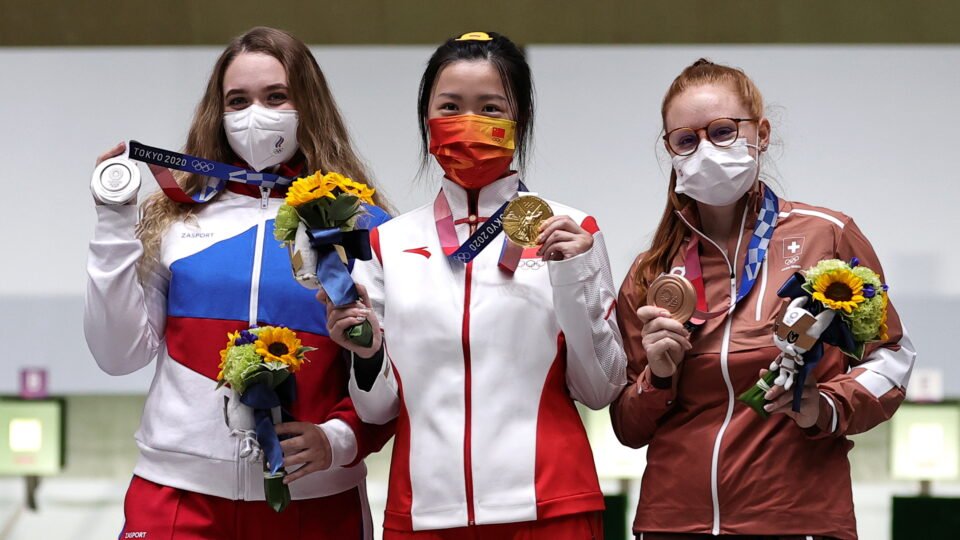 China’s Yang Qian claimed the first gold medal of the Tokyo Olympics on Saturday after prevailing in a battle of nerves with Russian Anastasiia Galashina in the women’s 10-metre rifle competition.

Galashina barely made it to the final, grabbing the last of the eight qualifying slots, but was in pole position for gold until she cracked under the pressure.

Her last shot of 8.9 was the lowest of any competitor in the final, leaving her on a total of 251.1.

Yang was not immune to the pressure at the Asaka Shooting Range but her below-par final shot of 9.8 was still enough to snatch the gold with an Olympic record total of 251.8.

Supporters and team mates watched the nail-biting final in the stands, cheering to the rock music piped into the venue.

When International Olympic Committee President Thomas Bach presented the medals, the athletes all waved their sunflower bouquets towards the crowd, their smiles obscured behind their masks.

“I was really nervous. The competition was really tight, but I’m so happy that I could win,” Yang said after winning an event which did not feature a single medallist from Rio.

“We did train how to perform under pressure. The coaches would actually create a nerve-wracking atmosphere and try to pressure us,” she later told reporters through a translator, her long hair pinned back with a yellow barrette.

Galashina said the pressure got to her on the final shot.

“I got too nervous, held on too long. My thoughts were not in the right place. I lost concentration. The explanation is very simple,” Galashina said, adding she was still “euphoric” with a medal in her first Olympics.

Russian athletes are competing under the flag of the Russian Olympic Committee (ROC) at the Tokyo Olympics this year as part of sanctions for several doping scandals.

Norwegian Jeanette Hegg Duestad had set an Olympic qualifying record of 632.9 to reach the final but finished just outside the medals.