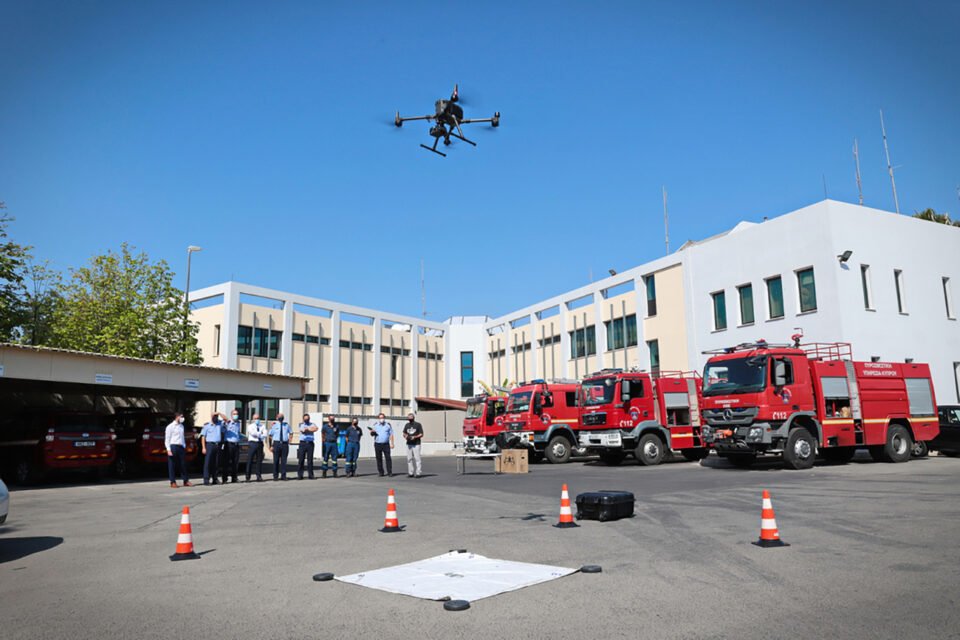 The fire service has received a donation of two state-of-the-art drones worth more than €40,000, which are expected to boost firefighting capabilities, it was announced on Wednesday.

The CEO of Hellenic Petroleum Cyprus Ltd (EKO) George Grigoras donated the drones at the headquarters of fire brigade in Lakatamia on Tuesday, saying the company aimed to provide “a modern solution in the prevention and management of fires” so the country does not face again a “catastrophe of a similar scale” with the fires in the mountainous areas of Limassol and Larnaca earlier in July.

The donation includes training of firefighters to how to operate the drones in locating fires so that the department can react more quickly.

Thanking the company for their important donation, the acting director of the fire brigade Polivios Hadjivasiliou said the new equipment would facilitate and upgrade “the difficult work of the service”.

In the recent fire which started in Arakapas on July 3, as well as in previous cases, the service borrowed drones from other government departments.

“Having our own state-of-the-art equipment we can immediately have all the data from the front and save the lives of those at risk,” the acting director said.

The two drones are DJI Matrice 300 RTK models equipped with high-resolution cameras including a radiometric thermal camera and a laser rangefinder. According to the manufacturer, they have autonomy for up to 55 minutes of flight and advanced artificial intelligence (AI) functions.

They can fly up to 7,000 metres while remote control transmission can reach up to 15 kilometres.

According to the fire brigade’s press release, “drones are essential supplies of every modern fire service,” as with the capabilities of mapping and monitoring, from a distance, they provide, in real time, necessary information and multiply the efficiency of firefighting operations.

These drones have the ability to fly to the point of fire, even in conditions of dense smoke, and to collect data accurately and send it quickly to firefighters, the service added.

The radiometric thermal camera can also be put into operation at night to magnify and accurately present the critical data needed to reduce the extent of a disaster and to save lives.

Moreover, the operations of the drones are not limited to the time of fire, but they can patrol normally and detect potential outbreaks or hazards.

However, their use is not limited to the prevention and extinguishment of fires.