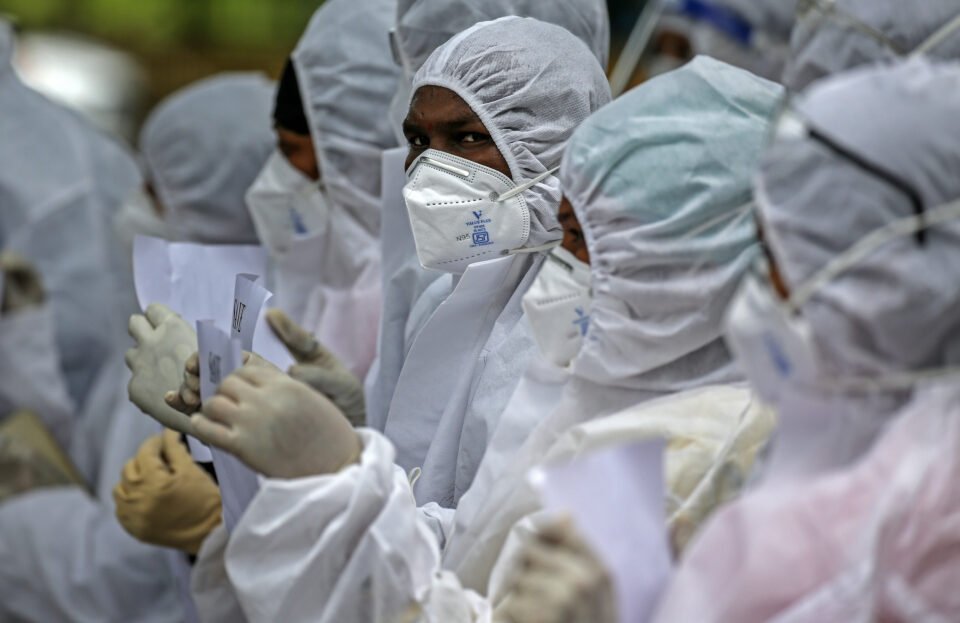 From surgical masks and gloves to disposable hospital gowns and aprons, the Covid-19 pandemic is creating a mountain of plastic medical waste that is polluting the land and sea – alarming doctors and environmentalists alike.

One young entrepreneur in Mexico has now invented a range of reusable PPE (personal protective equipment) she hopes will stop tonnes of single-use medical wear ending up in landfill, incinerators and waterways – and save hospitals a fortune.

Tamara Chayo said disposable PPE not only caused environmental damage, but could spread the virus which survives up to three days on plastics – a particular concern in countries where medical waste management is poor.

“Most of my family are doctors and nurses. They think, ok, I’m saving humans, but I’m not saving the planet,” Chayo told the Thomson Reuters Foundation.

“And if everything is thrown away it will create more disease, so it becomes a never-ending cycle.”

Chayo, a 21-year-old chemical engineering student, co-founded MEDU Protection in mid-2020 to develop a sustainable suit to protect health professionals treating Covid-19 patients at a time when PPE was in short supply.

The garments are made from a fabric similar to the coating used on surfaces in viral research laboratories.

Chayo says a doctor can use four disposable gowns a day whereas her PPE can be worn all day and washed 50 times without losing its protective properties – meaning each garment saves 200 plastic items from landfills and incinerators.

“I’m really excited about this,” said Chayo, many of whose family members have been working on the Covid-19 frontline.

“We’re not just making medical apparel, we want to create a movement for a greener medical industry.”

MEDU’s garments are embedded with QR technology which informs health workers, via a smart phone app, how many times an item has been washed.

After 50 wears the PPE is returned to MEDU which disinfects it and converts it into cotton scrubs and bags for packaging its products.

Chayo, who plans to expand to the United States and France, estimated reusable medical apparel could slash hospital PPE spending by 90 per cent.

Approximately 129 billion disposable masks, mostly made from plastic microfibres, and 65 billion disposable gloves have been used every month during the pandemic, according to a study in the journal Environmental Science and Technology.

The United Nations estimates about 75 per cent of plastic generated by the pandemic – including medical waste and packaging from home deliveries during lockdowns – will likely end up in landfills or the sea.

The production of plastic which uses fossil fuels as a base material – and its incineration when discarded – is also a significant driver of climate change.

Tom Dawson, founder of Revolution-ZERO which has developed a range of “planet-saving PPE” in Britain, said the pandemic had reversed recent progress on cutting plastic use.

While there was “phenomenal” interest in reusable PPE, he said there were obstacles to its adoption.

When the pandemic struck many governments stockpiled disposable PPE which they are supplying free, meaning hospitals have no economic incentive to buy reusable products.

Another problem is the lack of clinical grade laundries which have disappeared as hospitals switched to disposable PPE.

From Britain to India, entrepreneurs are also looking at how to recycle plastic PPE – turning it into everything from toolboxes to bricks.

The plastic can be used to manufacture anything from school chairs to 3D printer filament and yarn for clothing.

“It takes what’s designated as a single-use product and actually turns it into a multi-use product,” said TCG managing director Mat Rapson.

Five UK hospitals have begun using the machines with more placing orders. TCG is also liaising with distributors in Canada, Australia and Hungary among other countries.

About 6,500kg of CO2 emissions are saved for every 10,000kg of material processed, Rapson said – mostly due to savings on transporting and incinerating the waste.

In India, entrepreneur Binish Desai is turning PPE into grey bricks and construction panels to build low-cost housing and schools.

Desai, 27, who started making bricks from waste as a teenager, has invented a new brick made from disinfected and shredded masks and other PPE mixed with paper mill waste and binder.

The entrepreneur, nicknamed “The Recycle Man of India”, said the bricks were three times stronger than earth bricks, twice the size and almost half the cost.

Some of the masks are collected from “eco-bins” installed in hospitals, restaurants and other public places.

Desai, whose story is being turned into a film by a major Indian production company, is looking to expand to Britain, the United States, Canada and Brazil.

The entrepreneur, who founded Eco-Eclectic Technologies in 2016, initially plans to export his bricks to Brazil, but eventually wants to build a plant there to process local waste.

“We believe in micro social enterprise so instead of having one big factory we have multiple factories across India so we create local jobs as well as recycle local waste,” he said.

Desai believes India – with its tradition of recycling and a less established throwaway culture than many Western countries – can become a global leader in zero waste technology.

“Attitudes are changing – absolutely,” he said. “The pandemic has made us far more aware of how much waste we’re generating and that it’s not sustainable.”