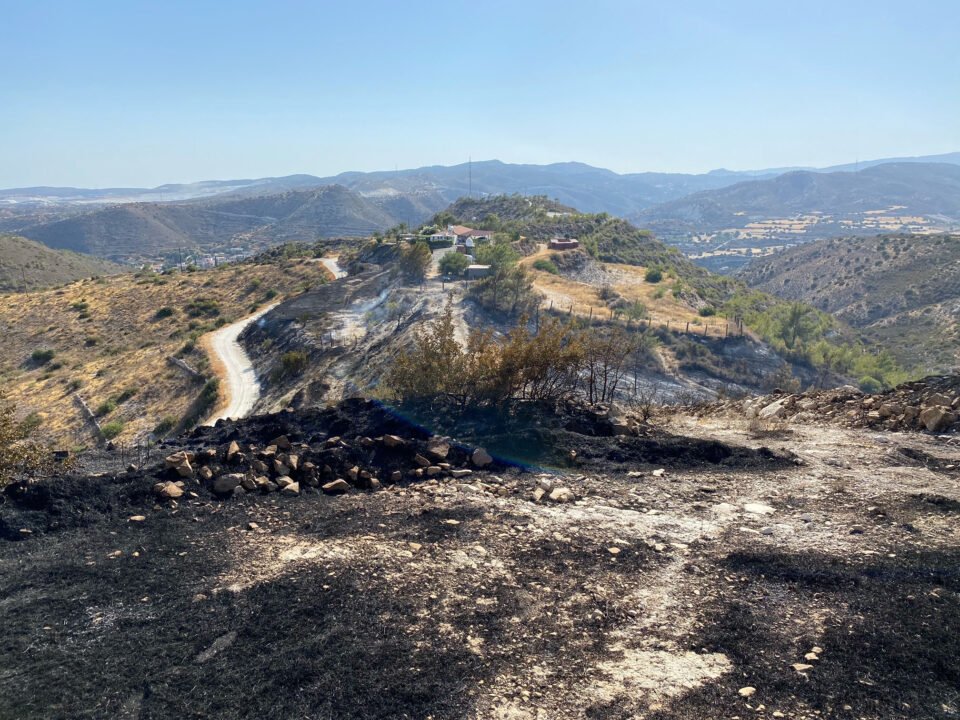 The area near Kalavasos affected by the fire

Houses had to be temporarily evacuated near Governor’s beach on Wednesday as fire fighters battled fires in Limassol district that led to the closure of a section of the Nicosia to Limassol motorway for several hours and heavy traffic congestion.

The old Nicosia to Limassol road was also closed to traffic with police urging drivers to use the Kakopetria route to reach Limassol. Both roads reopened at 4pm.

The fire in Pentakomo started at around 12.20pm. According to fire service spokesman Andreas Kettis, the fire had broken out in dry grass and wild vegetation due to a mechanical problem in a moving vehicle.

The car, which was on the motorway, was destroyed but no passengers were injured, media reported.

Eleven fire engines from Limassol and Larnaca, as well as two forestry department helicopters were at the scene.

About an hour after the blaze broke out, the civil defence, collaborating with the police, evacuated some houses in the area.

An action plan was also set up by the civil defence and lifeguards to transport people by sea.

The fire was near the camping site, the community leader of Pentakomo Pampos Charalambous told the media, adding that the fire “threatens individual houses and efforts are being made to protect them”.

Shortly afterwards at around 1.30pm another fire broke out in nearby Kalavasos in wild vegetation.

Efforts to extinguish the fire were also joined by a Forest Department aircraft and two helicopters of the British Bases.

To help put out the fire near Governor’s beach in Kalavasos, aerial operations which were participating operations to extinguish the fire in Pentakomo and yet another one in Analionta village, Nicosia, also joined efforts in Kalavasos later in the day, Kettis said.