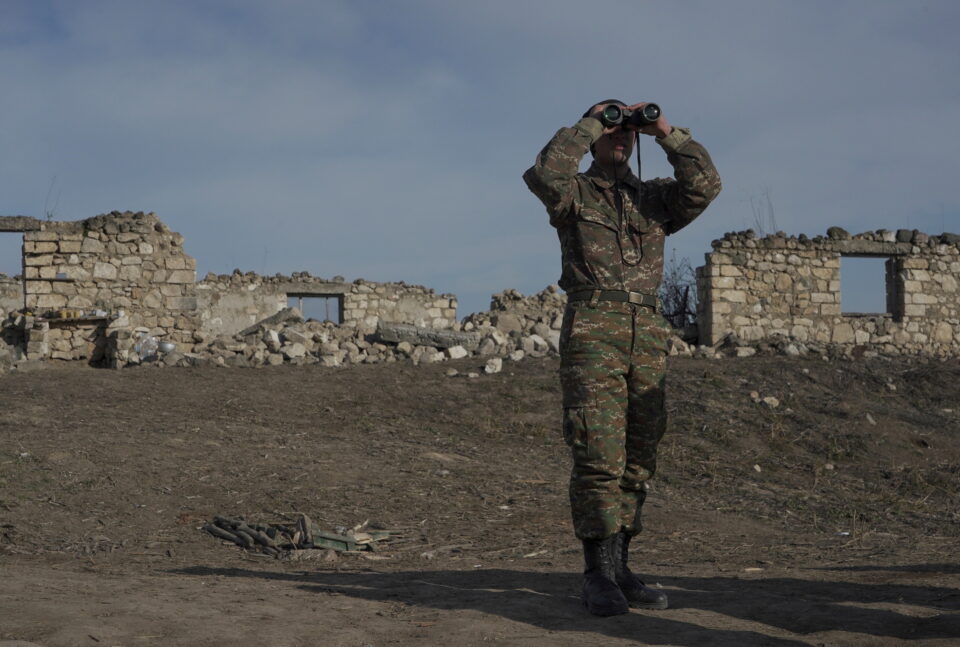 FILE PHOTO: An ethnic Armenian soldier looks through binoculars as he stands at fighting positions near the village of Taghavard in the region of Nagorno-Karabakh, January 11, 2021. Picture taken January 11, 2021. REUTERS/Artem Mikryukov/File Photo

Armenia said that three of its soldiers had been killed in an exchange of gunfire with Azerbaijan and both sides later accepted a Russian ceasefire proposal to try to calm tensions.

Armenia’s defence ministry said in a statement that Azeri forces had attacked Armenian positions near the border between the two countries. Four Armenian servicemen were injured in the same incident, it said.

Azerbaijan’s defence ministry said two of its soldiers had been wounded by shelling. In a statement, it accused Armenian forces of what it called “provocations” in the Kalbajar district and said its army would continue to retaliate.

The incident was one of the deadliest since a six-week war between ethnic Armenian forces and Baku over the Nagorno-Karabakh region and surrounding areas ended last year.

U.S. State Department condemned the recent clashes between Armenia and Azerbaijan on Wednesday and urged the countries to uphold their ceasefire commitments.

“The U.S. urges Armenia and Azerbaijan to return as soon as possible to substantive discussions under the auspices of the OSCE Minsk Group Co-Chairs to achieve a long-term political settlement to the conflict,” State Department spokesperson Ned Price said in a statement.

In Azerbaijan on Wednesday, a court sentenced two Armenian soldiers to 15 years in jail on espionage charges. The soldiers were arrested in December after the conflict.

In fighting last September to November, Azeri troops drove ethnic Armenian forces out of swathes of territory they had controlled since the 1990s in and around the Nagorno-Karabakh region, before Russia brokered a ceasefire.

A simmering border dispute between the two has since flared up, with both sides accusing each other of separate incursions into each others’ territory in recent months, highlighting the fragility of the ceasefire.