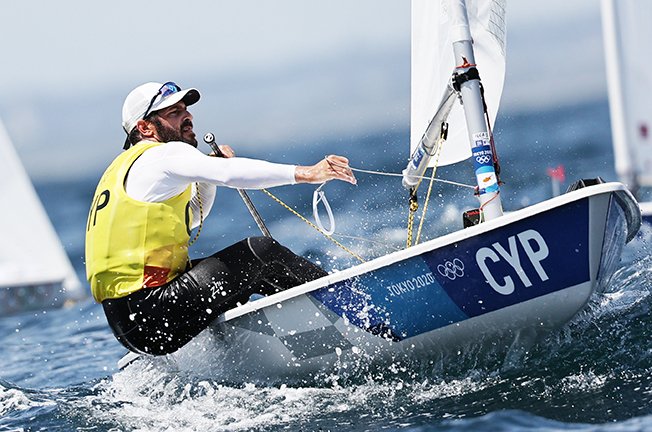 Pavlos Kontides in action at the Enoshima Yacht Harbour on Thursday

Cypriot sailor Pavlos Kontides suffered what was described as the biggest injustice of his career at the Tokyo Olympics on Thursday when he was punished for allegedly ‘pumping’ during the seventh race of the laser event.

Spanish judge Maria Torrico decided that shortly before the end of the race, Kontides violated regulation 42.2 (a),

The Limassol native was warned over the same offence in the fourth race earlier this week, and as a result, was given a 36-point penalty on Thursday.

According to Cyprus Olympic Committee correspondent Argyris Argyrou, Kontides did not need to pump, as he was clear in second place, behind Australian Matt Wearn and well ahead of American Charlie Buckingham.

The Cyprus delegation did not appeal the decision, despite a feeling of huge injustice over the ruling and the London 2012 silver medallist must now forget all about the day’s drama and be ready to go again on Friday in his quest for a medal.
Kontides began the day in gold medal position and was in a focused mood as he began strongly in his battle with closest challenger Wearn.
The duo surged ahead of their rivals and were involved in a tight battle until 300 metres from the finishing line, where the offence was adjudged to have taken place
Despite his obvious disappointment, the Cypriot managed to keep his composure in the eighth race. Staying close to the leaders, he finished sixth, with Warren first again.
Therefore, at the end of the competition’s first eight races, Kontides slips down to second place with 44 penalty points, behind Wearn, who has 29 penalty points. Norwegian Herman Tomasgaard is third with 49 penalty points.
The final two races will be held on Friday, with Kontides ideally needing to reduce the 15-point difference that separates him from Warren, in view of the medal race on Sunday.

Pumping is the action of letting a sail (usually the main sail) out before bringing it back in, to create forward momentum. It is typically done repeatedly in short succession. This artificially creates additional wind pressure in the sail and with it boat speed.

It’s usually windsurfers or dinghy sailors who pump their sails to gain an advantage on the downwind legs or to initiate surfing on a wave.

However, even on larger boats it is theoretically possible to pump a sail, although the size and weight of mainsails and booms on larger boats usually makes pumping too difficult to perform.
There have been different rules on pumping, ranging from a ban to complete freedom to pump, as well as variants inbetween.

At the Olympics, there is a controversial rule for the Finn class, allowing unlimited pumping downwind.
But most racing follows the ISAF’s Racing Rules of Sailing rule 42.3, which limits pumping to one pump per wave and only where pumping may assist in initiating surfing.