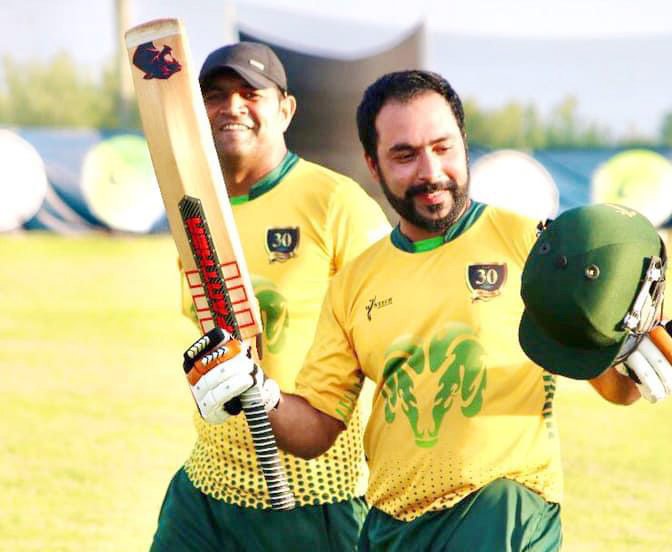 A fluctuating match in the 2021 CCA #BAOFINANCIAL 40 Over Cup presented by Abbeygate Insurance saw Moufflons eventually triumph over Cyprus Eagles CTL by two wickets at the Ypsonas cricket ground.

The Eagles initially had no answer to the bowling of Gagandeep Singh as they slumped to 76 for 7, before a superb recovery was started by Jawad Ali Shah (52) and Poluri Rajasekhar (57) and continued by Ranimekala Manikanta, who also made 57 batting at no.10.

The Eagles’ all-out total of 257 was far more than they could have dared to hope for. Gagandeep finished with 5 for 60.

Moufflons started well in reply through Gurdeep Sharma (44) and Zeeshan Sarwar (32), and with their top batsman Mehran Khan weighing in with 60 they seemed well set for victory. However a middle order collapse swung the game back towards Eagles as more than 30 runs were still needed with just three wickets left. But Gagandeep reinforced his man of the match credentials by hitting a vital unbeaten 27 to see his team over the line for a famous win.

Mehran Khan made an even more telling contribution the following day, helping Cyprus Moufflons beat Limassol Thunders in the 2021 CCA #BAOFINANCIAL T20 Cup. Thunders were restricted to 142-5 from their 20 overs, a target which Moufflons knocked off in a remarkable nine and a half overs.

Mehran reached an undefeated 104 off just 28 balls, his innings including 9 sixes and 11 fours.
The Limassol Moufflons fared less well, going down by 8 wickets to Amdocs, whose captain, Chaitas Shah, contributed 68 towards his team’s winning score of 164-2, comfortably chasing down the Moufflons total of 163-6, of which Asad Ali made 49 and Amir Sohail 35 not out.

Limassol Qalandars looked likely to set Sri Lankan Lions a challenging target while the consistent Jawad Ali Shah was at the crease. But after he fell for 51 the innings subsided to a meagre 127 all out, with three wickets apiece for Sujith Tennekoon and Ruwan Manawasingha.

Lions captain Nalin Pathirana top-scored with 33 to help his team to a 5-wicket win, with Ruwan again in the action, hitting the winning 6.

The wins for Sri Lankan Lions and Amdocs have lifted them to joint third place in the West group table, behind Cyprus Moufflon and Cyprus Eagles who both still have 100 per cent records.

In the East group, where no games were played this weekend, Black Caps lead the way as the only unbeaten team, with a host of traditionally strong sides trailing behind them.