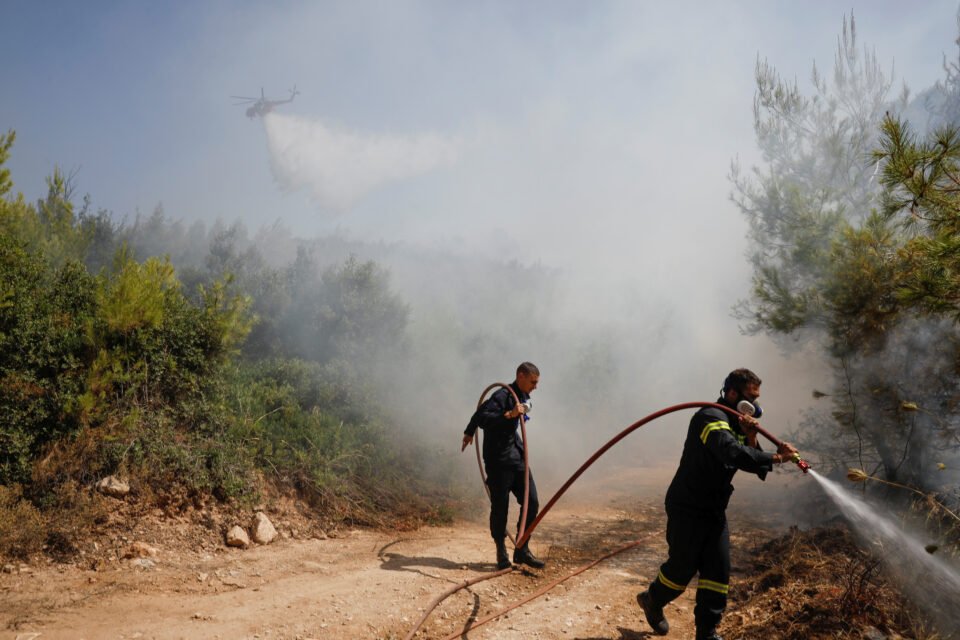 Greek authorities told people in Athens to stay indoors on Wednesday as a wildfire raging uncontrolled north of the city covered the sky in a thick cloud of smoke.

More than 500 firefighters battled the blaze on the lower slopes of Mount Parnitha, on the city outskirts, assisted by nine helicopters, five aircraft, policy and the army in a densely vegetated area in the region of Acharnes.

“The fire is still raging, its perimeter is very wide and the heat load is very strong,” a fire brigade official said.

Despite sweltering heat and stifling conditions, the national observatory advised people in the city to keep windows shut and to reduce movement outside because of the harmful particles in the sky.

Temperatures have been over 40 Celsius (104 Fahrenheit) but Deputy Civil Protection Minister Nikos Hardalias said the situation on Wednesday appeared somewhat better, helped by lower winds and humidity. One front was burning strongly but another three were abating and no casualties were reported.

The blaze broke out on Tuesday in the town of Varympompi some 20 km north of central Athens. In scorching temperatures, it spread to nearby towns burning homes and cars and forcing residents to flee.

“Thank God we haven’t had any loss of human life so far,” Prime Minister Kyriakos Mitsotakis said after an inspection visit early on Wednsday.

Power grid operator IPTO was trying to restore power in parts of the metropolitan region after the fire damaged parts of the grid.

Europe is grappling with a summer of extreme weather, from heavy flooding in the north to the severe heatwaves and fires that have engulfed several areas in the Mediterranean with Greece’s neighbour Turkey battling fires for the past week. (

“It is a difficult day for the country, we had 81 forest fires in the last 24 hours due to the extreme weather conditions,” Deputy Civil Protection Minister Nikos Hardalias told reporters.

The blaze north of Athens had three main fronts at the towns of Varympopi, Adames and Thrakomakedones, scorching homes and cars and forcing residents to flee.

Authorities had removed valuables at the former royal estate at Tatoi nearby and the civil protection service ordered residents of the Olympic Village to leave their homes. They could stay at designated hotels at the state’s expense.

Seven people were taken to hospital with breathing problems.

Earlier, children were evacuated from a summer camp and residents were ordered out of their homes in the suburbs of Varympopi, Adames and Thrakomakedones, some 20 km north of central Athens.

Some stayed on to defend their houses with garden hoses. Explosions sounded as the wildfire engulfed an unknown number of homes. Equestrian clubs let horses loose to flee the fire.

Prime Minister Kyriakos Mitsotakis visited a fire brigade operations centre coordinating efforts to contain the blaze and other fires, in the Peloponnese Peninsula and on the islands of Evia and Kos.

“All available means and resources have been deployed in the fight on multiple fronts,” his office said in a statement. “In these difficult times, the priority is to protect human lives.”

In Athens, the power grid operator IPTO said the fire had damaged parts of the grid, posing a major risk to the electricity supply in parts of the metropolitan region.

“Dozens of homes are being burnt,” Michalis Vrettos, deputy mayor of the Acharnes region, told Open TV as thick plumes of smoke rose over the houses behind him.

The fire disrupted train services and forced authorities to seal off part of a national motorway.

Europe is grappling with a summer of extreme weather, from heavy flooding in the north to the severe heatwaves and fires that have engulfed several areas in the Mediterranean region.

Greece’s neighbour, Turkey, was fighting wildfires near some of its most popular tourist resorts for a seventh consecutive day on Tuesday.

Man arrested for raping a minor