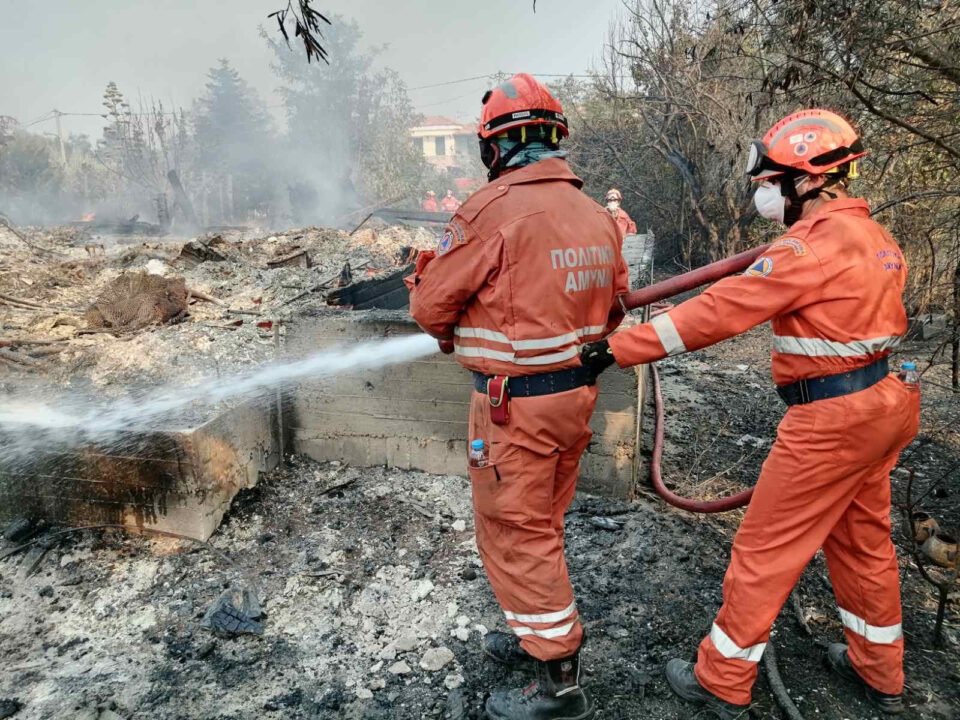 In a message on Twitter, Kettis said that the community has been evacuated and the firefighters are securing houses and demarcating the area.

“There are active fronts everywhere and the situation is constantly changing. All are in good health,” he said, adding that Cyprus’ ambassador in Athens Kyriakos Kenevezos visited the team during the day.

Earlier, a civil defence official said the firefighters had had “a difficult night” fighting flames alongside the Greek infantry fire brigade in the area of Tatoi and Afidnes, where the fire is still raging.

“The situation was and remains very difficult, as the fire is fanned by strong winds and spreads uncontrollably,” civil defence spokeswoman Olivia Michaelidou told the Cyprus News Agency.

On Friday, the fire brigade was battling 56 forest fires according to deputy minister of Civil Protection Nicos Hardalias.

After a few hours of rest, the Cypriot crews headed to the coordination centre early in the morning where they were expecting instructions as to which areas they will be sent to next, Michaelidou said.

“Soon we will know the exact areas in which our members will operate,” she said.

Asked whether further assistance has been requested by Greece either for additional crews or if the existing groups will be replaced, the spokeswoman said that for now, it is preferable to maintain the current Cypriot mission, which has already become familiar with the difficult situation in the area.

The Cypriot mission includes 20 firefighters and 20 members of the civil defence along with equipment.

Meanwhile, two aircrafts with two operators each, as well as four ground operators sent by the forest department to battle the fires in Rhodes were transferred to Crete late on Thursday.

Greece also asked for help from Russia, which sent a Beriev firefighting aircraft, and Israel, to deal with the uncontrolled fires in Attica, Evia and Ilia in the north of Athens.

So far, seven nations have responded to Greece’s call for aid in the fires, as part of the EU Civil Protection Mechanism.

Hundreds of people were asked to evacuate their houses, with some resisting to leave thinking they can protect their houses alone, Greek media reported.

Dozens of houses were burned as wildfires raged uncontrolled due to the extreme weather conditions.

Hardalias told the media that efforts were made to control the new front in Ancient Olympia, as large fires were raging in Attica, Evia, Mesinia, Eastern Mani, Tolofona, Grevena and Ilia.

The conditions are “extremely dangerous” Hardalias said and asked residents to collaborate with the authorities.

The situation was described as “frightening” by Government Spokesman Marios Pelekanos in a tweet.

“It is frightening what is happening in Greece and the surrounding areas,” he tweeted. “There are many fronts while the firefighting teams, that have been battling for days, are exhausted”.