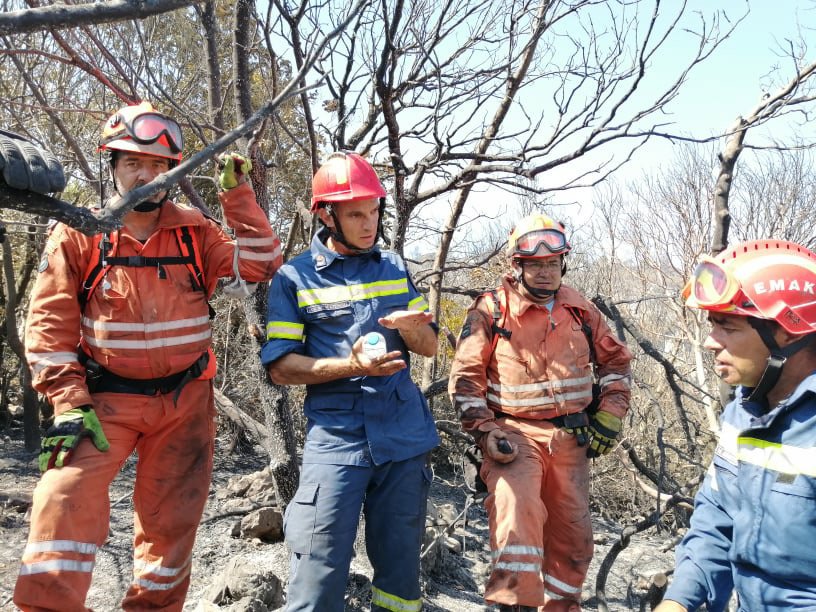 The Cypriot firefighting mission in Greece is being taken with an all-terrain military vehicle to Flabouri and Koromilia areas in Parnitha to continue efforts to extinguish the fire alongside the Greek fire brigade.

According to fire service spokesman Andreas Kettis, the crews, which were in the area on Sunday as well, had to be transferred to the specific points with a military vehicle due to the rough terrain.

They will demarcate the burned area and tackle any possible flare ups, Kettis said.

The crews, “are all in good health and continue with all their might to carry out their mission,” the spokesman added.

Olivia Michaelidou, spokesperson of the Civil Defence said the terrain was difficult.

“This is an area with steep slopes, without special road accesses or paths. The Cypriot mission was faced with a large number of flare ups, which they successfully contained,” Olivia Michaelidou told the Cyprus News Agency.

The 20 firefighters and 20 rescuers of the civil defence will continue to operate in Greece until the middle of the week, she said.

“They are familiar with the adverse conditions prevailing in Greece and despite their fatigue, their efforts are seen as particularly effective,” she added.

A volunteer with the civil defence spoke to the news agency about their experience in the fires and highlighted their fatigue, but said the situation is much better this week.

“Legs swollen and full of wounds, hands full of abrasions, hearts even more wounded by the daily images we experience but we are here, volunteer rescuers and firefighters, baptised in the same smoke to work in complete harmony to achieve the goal,” the volunteer said.

Meanwhile, two aircrafts sent by the forestry department were involved in fire-fighting efforts in the southern Peloponnese and Ilia on Sunday.

The EU Civil Protection Mechanism continues to channel support to help combat unprecedented forest fires in Greece and the rest of the Mediterranean.

Nine planes, close to 1,000 fire fighters and 200 vehicles are currently being deployed in Greece, the EU Commission said.

Thousands of people have fled their homes on the Greek island of Evia, Greece’s second-biggest island, as the flames engulfed homes in five villages. The full extent of the damage was not immediately known.

Wildfires have broken out in many parts of the country during a week-long heatwave, Greece’s worst in three decades, with searing temperatures and hot winds creating tinder-box conditions.

Across the country, forest land has burned, and dozens of homes and businesses have been destroyed.

The Minister of Finance, Christos Staikouras, announced the immediate financial support of fire-affected households and businesses adding that the relevant announcements will be made by the prime minister.

Following a communication with the president of the Central Union of Greek Municipalities (KEDE) Demetris Papastergiou, the head of the Cyprus Union of Municipalities Andreas Vyras said the two countries will coordinate regarding the huge rehabilitation effort once the fires are under control.

“At this moment the assistance to the fire brigade and the implementation of first aid measures for the victims are paramount.

“In the next few days, we will coordinate together for the titanic effort that we will have to make together to mitigate and compensate the damage,” Vyras said.

The Covid drug the Australian government has bought before being approved for use?