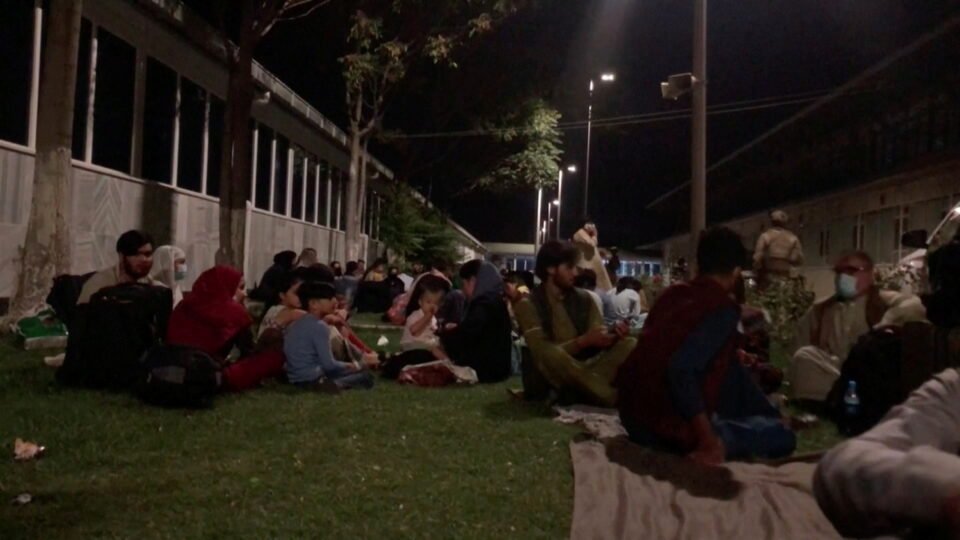 People wait by the roadside at Kabul airport, Afghanistan, August 23, 2021

Leaders of the Group of Seven countries were set to discuss on Tuesday whether to seek an extension to a Aug. 31 deadline for the evacuation of thousands of people trying to flee Afghanistan and whether to recognise or sanction a Taliban government.

Widespread chaos punctuated by sporadic violence has gripped Kabul’s airport since the Taliban took over the Afghan capital on Aug. 15, with Western and Afghan forces driving back crowds desperate to flee.

Evacuations were being conducted on a “war footing” as foreign forces try to meet the Aug. 31 deadline, a NATO diplomat told Reuters on Tuesday.

Thousands of Afghans have returned to their homes after learning that situation is “relatively calm” in provinces across the country, said the diplomat, who asked not to be identified, while cautioning that scant intelligence and security reports were coming in from remote districts.

U.S. President Joe Biden, who has said U.S. troops might stay beyond the deadline, has warned the evacuation was going to be “hard and painful” and much could still go wrong. Democratic U.S. Representative Adam Schiff, chairman of the House of Representatives Intelligence Committee, told reporters after a briefing on Afghanistan by intelligence officials that he did not believe the evacuation could be completed in the eight remaining days.

“I think it’s possible but I think it’s very unlikely given the number of Americans who still need to be evacuated,” Schiff said.

A Taliban official said foreign forces had not sought an extension and it would not be granted if they had. Washington said negotiations were continuing.

‘DOES IT STILL HURT? YES’

Many Afghans fear reprisals and a return to a harsh version of Islamic law that the Taliban enforced while in power from 1996 to 2001, and there have been isolated, but numerous incidents posted on social media that have fanned those fears.

Australia evacuated more than 50 female Afghan Paralympians, athletes and their dependents after securing visas for them, the Australian Broadcasting Corp reported on Tuesday.

Leaders of the United States, Britain, Italy, France, Germany, Canada, and Japan who meet virtually later on Tuesday may use the possibility of unified official recognition, or renewed sanctions to push the Taliban to comply with pledges to respect women’s rights and international relations.

“The G7 leaders will agree to coordinate on if, or when to recognise the Taliban,” said one European diplomat. “And they will commit to continue to work closely together.”

Leaders of the Taliban, who have sought to show a more moderate face since capturing Kabul, have begun talks on forming a government, while their forces focus on the last pockets of opposition.

Recognition of a Taliban-led Afghan government by other countries would have important consequences, including allowing the Taliban access to the foreign aid that previous Afghan governments have depended upon. A 2020 agreement signed by the former Trump administration explicitly states that the group “is not recognised by the United States as a state.”

Biden will face pressure from other leaders to extend the Aug. 31 deadline for evacuations. France has said more time was needed, and German Foreign Minister Heiko Maas said on Monday the G7 needed to consider whether to remain beyond that date.

Biden has faced widespread criticism over the withdrawal, which was initiated by his Republican predecessor, Donald Trump, and his opinion poll ratings have slipped.

For its part, the powerful U.S. military has been grappling with the collapse of U.S.-backed Afghan forces after 20 years of training. “Was it worth it? Yes. Does it still hurt? Yes,” General David Berger, the commandant of the Marine Corps, wrote in a memo to Marines.

Bitcoin price rises past $50,000 then retreats on profit-taking