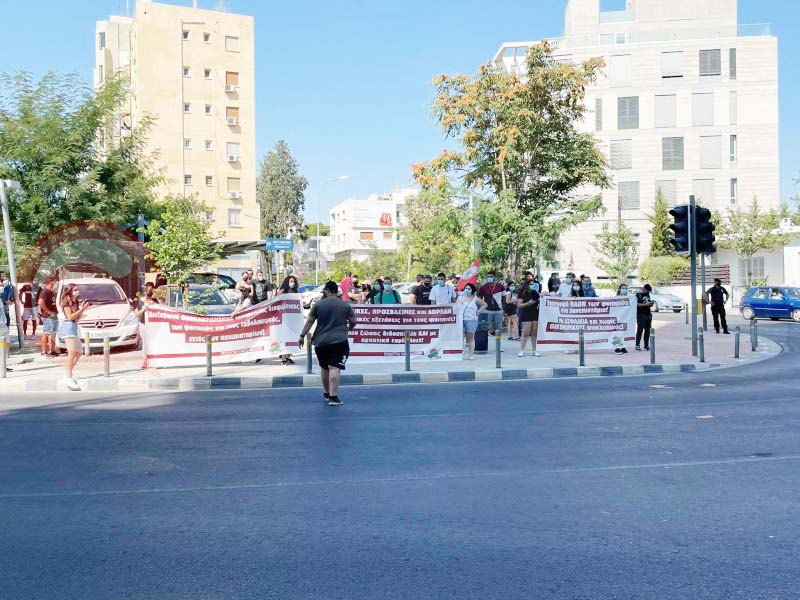 The health minister said on Wednesday that he cannot interfere in the University of Technology’s (Tepak) decision to only allow vaccinated and recovered students on campus for the new semester.

“Tepak is an autonomous organisation. If the universities themselves, however, decide to take stricter measures, it is something over which we cannot intervene,” Michalis Hadjipandelas said.

He was speaking after meeting Tepak students who staged a protest outside the health ministry in Nicosia after the university announced on Tuesday that unvaccinated students would not be allowed to attend courses physically, even if they have a negative PCR test result.

The University of Cyprus, however, has stopped short of such a move, announcing on Wednesday that all students and staff members will only be required to have a SafePass in order to access the premises during the winter semester.

“The Senate of the University of Cyprus in today’s meeting reaffirmed its decision, dated July 7, 2021, to conduct winter semester courses with a physical presence and with the presentation of the European digital certificate Covid SafePass,” the university announcement said. According to the July decision, either a PCR or rapid test is suitable for a SafePass.

It added however that if classroom size does not allow a course to be conducted with physical presence for all students, then priority will be given to students who have a vaccination certificate or have recently recovered from Covid-19.

The government has been debating whether students at universities would be allowed to return only with a PCR or with a cheaper rapid test. The decision, expected to be announced two days ago, was postponed until next Wednesday.

“We decided to postpone the decision for a few more days, to see if the epidemiological situation allows us to return to universities with PCR test and rapid test,” Hadjipandelas said on Wednesday, but stressed that the government could not intervene in Tepak’s decision on the vaccinations.

Michalis Damianidis, president of Proodeftiki Tepak, was one of the students outside the ministry. He said that the protest had been planned before Tepak’s announced its decisions on vaccinations and had been arranged to protest the possibility that only PCR tests and not the cheaper rapid tests would be allowed to enter the premises.

“The university’s decision for mandatory vaccination to attend classes physically is even worse,” he told the Cyprus Mail.

“The university of technology cannot work with online courses. It is much more difficult than classical studies. A physical presence is extremely important because of the nature of our studies. How can a civil engineering student who takes technical drawing lessons at home study as effectively as the one in the classroom?” he said.

“Students must be given the freedom to decide whether they want the vaccine or not.”
“I want to make it clear that Proodeftiki is in favour of vaccination. I have received the jab myself,” he clarified.

He said that “bullying students with tyrannical measures” was not the way to increase the vaccination rate among young people but a better and more effective communication campaign to make them aware of vaccination benefits.

Brandishing a sign saying, ‘Return of all students to universities, safely and without financial exclusion’, students gathered outside the ministry on Wednesday morning to protest the vaccination policy and to insist that rapid tests be allowed for admission to the university premises instead of pricey PCR tests.

“Punishing students with exclusion from live lessons or imposing mandatory test fees is financial elimination,” Damianidis said. “We are already burdened with the high rents in Limassol, the cost will get even worse if people need to give extra €120 euros per month at least for PCR tests.”

He said what the students were asking for was to have PCR tests – if that is imposed – to be free of charge, “or at least to decide on the use of rapid antigen tests”.

Damianidis said If the students’ requests were not met, they would take measures, even abstaining from classes.

“Universities are autonomous entities whose decisions are determined only by the senate. No decision by the state for future PCR or rapid test will not affect ours. We are legally covered,” he told the Cyprus News Agency.

Zafeiris explained the reasons for the decision, saying that it is the only solution since students have an increased number of contacts.

“It’s difficult to tackle the spread of the virus in a university. Tepak conducts 400 lessons per week. Exercising proper control in such a situation is very challenging since half of the administrative staff would have to participate in the control process, there is a risk of not being done properly,” he said.

“Legal advisers have told us that we have every right to do this and there is no question of discrimination because we give students the choice to attend classes online. Those who chose to receive the jab are returning normally. Those who don’t, have time to think and choose if they want to be vaccinated. If they choose to do so three weeks later, they will return too,” he added.

The rector said he is optimistic that the students would eventually understand that the decision was in their best interest.

The university decided to support the vaccine by calling on all its members to receive the jab. Yesterday’s decision was voted by the members of the senate with 16 votes in favour.