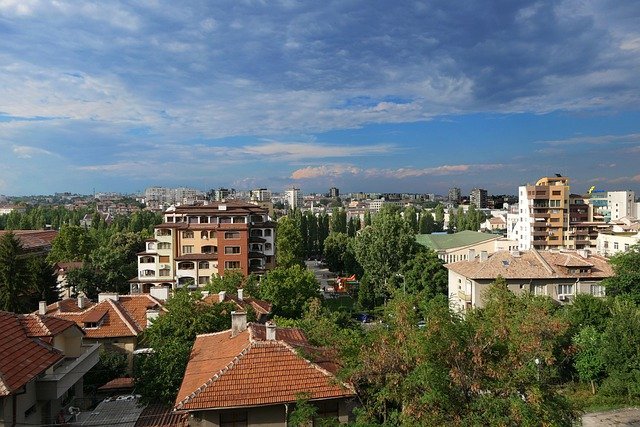 Obviously, planting trees is no new idea. But the simple fact is that we just do not do nearly enough to implement it. Pictured: the city of Haskovo in Bulgaria

One of my favourites from among the rich variety of names sometimes flung at nature conservationists, is that of ‘tree-hugger’. Not sure where the term comes from, whether it has ancient druidic roots (less likely, I would guess) or relates to more contemporary environmental activists chaining themselves to trees in a desperate bid to stop bad road developments, or neither. In any case, I have a fondness for the epithet, even if it is intended as an insult suggesting an over-simplistic approach. For most conservationists are indeed inordinately fond of trees (and not averse to the occasional trunk embrace).

Hardly surprising, you might say. It is after all hard to find anyone who actually dislikes trees. (Developers in whose way they stand are a possible exception, though even in this instance, a love for trees is oft professed!). Trees are wonderful and oh-so-important, whether as part of a native forest or as shady relief in a built-up place. This then is a simple piece about the value of trees and the need to plant more … in the right place and of the right species, of course.

The trigger for this came from an unhappy, sweaty experience I endured late one morning last month. Foolishly, I walked across the empty, concrete wasteland that is the recently revamped Eleftheria Square, our capital city’s new architectural “marvel”. I know this sounds like me jumping on the bandwagon of criticism circling round this concrete plug forced into the heart of our ancient capital, but my particular point is this: where are the trees?! For half the year, the shade-free expanse of the square will have all the allure of a … well of something desperately devoid of allure. Not one tree for people to meet under, to sit playing ‘tavli’ under?

However, let us move on from the specific insult to common sense, and get to the big picture. We need more trees. Hundreds of thousands more trees. From the dozen plane trees that should already be being nurtured to provide deep shade in Eleftheria square, to the arboreal spread that should be occupying every pavement, vacant plot, parking lot and all other available space in Nicosia and all other towns across our increasingly hot island.

Unless you have been living in a cave (under Eleftheria square, maybe?) then you will have seen the latest, unequivocal warnings from the world’s top experts about the climate crisis fast morphing into a global disaster. I will not attempt to regurgitate the International Panel on Climate Change (IPCC) findings here, but barring drastic and collective action, we face an uncertain future wrought by greenhouse gas emissions and failure to preserve forests and other carbon sinks on land and seabed. For Cyprus, we can expect more of what we have already been experiencing in recent years: lower rainfall, higher average temperatures and more heat waves. “It is indisputable that human activities are causing climate change, making extreme climate events, including heat waves, heavy rainfall, and droughts, more frequent and severe,” the IPCC states.

Important to add that the IPCC were not all doom-and-gloom; there is much in the experts’ landmark report about solutions that can still make a real difference. Reducing emissions, of course, and turning to appropriate new technologies like renewable energy. Protecting forests, wetlands and seagrass beds – all vital carbon sinks – while allowing space for restoration of these crucial habitats, to expand the carbon lock-up and build ecological strength on our beleaguered planet. There are more high-tech solutions on offer too, such as carbon-capture technology.

I would rather though, put faith in trees, an ancient and natural carbon-capture technology that simply has no downside. Planting more trees, and making sure we protect what we have, has to be a massive part of the climate change solution. Obviously, this is no new idea. But the simple fact is that – as with many sound ideas that enjoy widespread acceptance in society – we just do not do nearly enough to implement it.

Having abandoned Eleftheria square, I walked around the capital for a wee bit, trying to draw a simple mental picture of how many more trees could be planted on pavements, in squares, on vacant lots or even down the middle of roads. No exact calculation is offered here: but the answer is surely thousands, many, many thousands. What about the inconvenience of upheaved pavements, clearing lots when the time to build comes, aphid juice, autumn leaves and the droppings of roosting birds, you might ask. Well, yes, inconvenience. However, the time for considerations of inconvenience outweighing climate emergency necessity is long gone. Trees and the carbon they soak up (not to mention the wonderful benefits of summer shade and a greener city) must take clear precedent over inconvenience.

The list of native and naturalised trees that would fit the bill is long, we only need avoid invasive aliens like acacia, which can spread to overrun rich natural habitats. To name a few: plane trees and carobs, cypress and almonds, pines and walnuts, terebinth and pepper trees, with some lentisc, tamarix and terebinth bushes thrown into the mix. Choose native plants and watering is needed only early on, to secure establishment. And this tree-planting ‘blitz’ should not be confined to cities and suburbs, our villages can play host to thousands more trees too.

No reason to stop at built-up areas, either. Our more intensive farmland areas would benefit hugely from the establishment of hedgerows, tree-lines and small copses, again using native trees and bushes. In other, less intensive and generally more upland farmed areas, it is more a case of preserving the native bushes and trees already there within complex mosaics of small fields. Native vegetation, whether freshly planted or just preserved, helps prevent soil erosion, provides refuge for pollinators and for natural predators of crop pests, while locking up CO2 as wood to boot.

The exception to this planting frenzy should and must be natural habitats. Wetlands, scrublands and forests do not need ‘improving’ through tree-planting, however well-intentioned. Most trees are not suited to the drier expanses of our island, and the low, scrubby vegetation found in such areas is often the best suited to the local climate – and a wonderfully rich wildlife habitat to boot. Even after a fire disaster, the best thing is to allow time and room for natural recovery, with planting kept to an absolute, and targeted, minimum. That crucial caveat apart, let us have a significant portion of the next national budget devoted to a tree-planting blitz. Then let’s draw up a proper plan for all to get on board and get planting – volunteer support would not be lacking – to turn our grey, built-up spaces into living, green, carbon sink oases.

Our View: Healthy banks limit the dangers of poverty